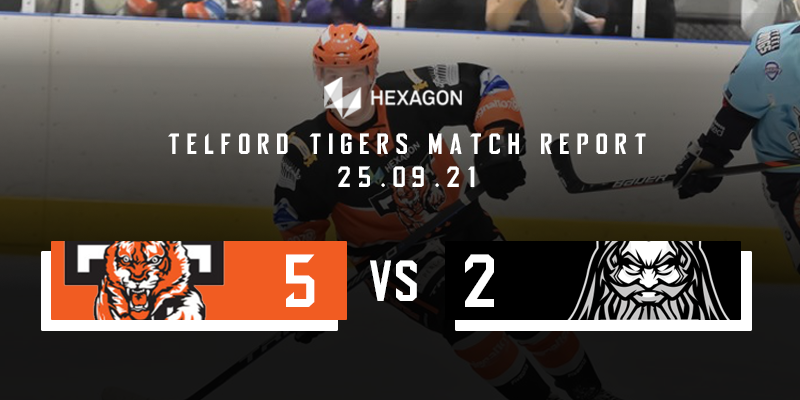 Tigers Fightback to Secure Home Win. Hexagon Telford Tigers returned to Autumn Cup action after losing their previous home game last week to Basingstoke Bison. As with the previous game, Tigers conceded first. With Dan Mitchell serving a cross-checking penalty, Tigers spent much of the Lightning power play on the offensive and had several chances whilst shorthanded but Milton Keynes made the breakthrough when James Griffin’s shot went through Brad Day in the Tigers’ goal to give Milton Keynes an undeserved lead. Referees Alyward and Williams were causing much unrest amongst the Tigers’ faithful with several calls being missed, including a clear cross-check to Jason Silverthorn by Lightning’s Adam Laishram. Immediately after, Tigers were awarded a penalty against Deakan Fielder for tripping.

Milton Keynes then had a call to question the officiating when first Laishram was given a slashing penalty, followed by Griffin being called for a cross-check, giving Telford an extended 5-on-3 power play. Unlike the previous two games where Tigers had a two-man advantage, they made this one count. Within 30 seconds, Tigers were level. Silverthorn’s shot on goal was deflected through the legs of Brandon Stones in the Milton Keynes goal.  Tigers still had a man advantage and scored again within seconds to take the lead. Silverthorn scoring from almost the exact same spot on the ice, shooting over Stones into the top left-hand corner of the net.  Tigers were back on the power play shortly after, when Laishram took another visit to the penalty box this time for a cross-check. Jonathan Weaver extended Tigers’ lead with a floated slap shot that Stones couldn’t see as he was screened by a Tigers’ forward.

With the period into the final two minutes, the officials hadn’t finished with the penalties and upsetting the Tigers’ fans. Danny Rose was called for interference and Thomas McKinnon’s arguing with the referees earned a penalty of his own for abuse of officials. With Milton Keynes having a two-man advantage, they scored their second goal through a long-range Leigh Jamieson slap shot which Day didn’t see, beating him low down to cut Tigers’ lead to one at the end of the first period.

The pace of the game was very high throughout the second period with both teams conceding further penalties as seemingly every infraction was called. Tigers extended their lead with 5 minutes left in the period. Weaver’s shot from the blue line was expertly tipped past Stones by Ricky Plant to put Tigers 4-2 ahead.  Further controversy occurred shortly after the Tigers’ goal. A shot from Milton Keynes’ Sam Talbot appeared to go into the net and bounce out again, but none of the officials reacted and play continued, with Talbot arguing the puck had gone in. Tigers’ lucky escape saw them head to the third period two ahead.

Tigers continued to take further penalties and gave Milton Keynes several chances to get back in the game but Day made a couple of key saves to maintain the Tigers’ lead. With time running out, Telford caught out the Milton Keynes’ defence with a short-handed breakaway by Andy McKinney who sent a perfect pass across to the unmarked Scott McKenzie, allowing him to steady himself and send the puck high past Stones for the fifth goal, sealing Tigers first home win of the season.

After the game, Tigers’ Head Coach Tom Watkins commented, “It was great to put in a very positive 60-minute performance this evening. We came out with a point to prove to ourselves tonight and managed to win all three periods with a gritty physical game. Our power play was excellent, very efficient and certainly turned the momentum of the game in our favour. Equally, I thought our penalty kill was strong despite giving up two goals, up-ice pressure was the key that unsettled Milton Keynes. Tonight was the first time we had 4 lines rolling which was good to see.

It was a pleasure to welcome club legend Claude Dumas to the game this evening. What a talent he was, scoring over 3000 points in a career is simply outstanding, he tops the Tigers all-time lists in games played, goals scored and points scored, with all those records highly unlikely to ever be broken. He is a great guy and I have some great memories of playing alongside him.”