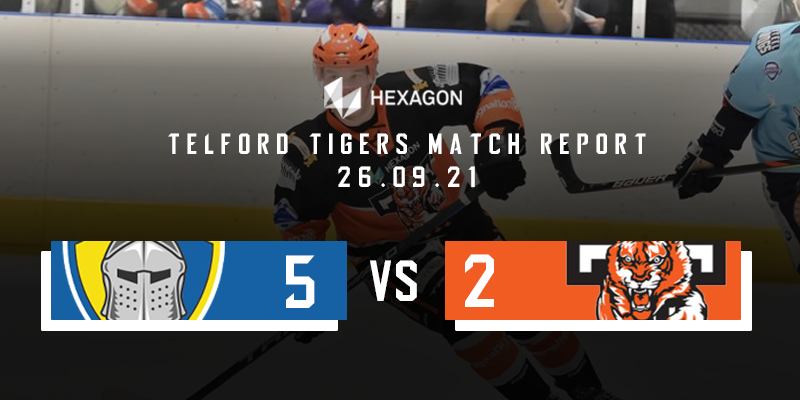 Tigers started the game on the back foot and conceded the opening goal in the fourth minute. Matty Davies scoring for Leeds. Tigers fought back and levelled the game shortly after with a goal from Joe Aston, scoring with a wrist shot after being set up by Sam Watkins. An even period saw Tigers have a late power-play chance when Jordan Fisher was called for hooking but the power-play unit could not create anything of note.

The second period saw Leeds take the lead again. Sam Watkins was serving a delay of game penalty when Sam Zajac found the unmarked Brandon Whistle who scored with a wrist shot past Jordan Lawday in the Tigers’ goal.

Midway through the period, Andy McKinney took exception to a slash from Jordan Fisher and dropped the gloves, with both receiving a 5-minute fighting penalty.

The third period started badly for the Tigers with an early goal for Kieran Brown to put Leeds 3-1 ahead. Again, Tigers fought back and scored through Jason Silverthorn.

But, Leeds answered back immediately and scored again to restore their two-goal lead. Lewis Houston netting for the Knights.

With time running out, Tigers pulled Lawday from the net but couldn’t force a goal and conceded again with Whistle scoring into the empty net to seal the game.

Man of the match: Ross Connolly.

After the game, Head Coach Tom Watkins commented, “I don’t like to lose at all but I have got nothing but good things to say about our performance this evening, perhaps some clinical finishing was the only difference. We played very similar to Saturday night against Milton Keynes, played hard, put in a good effort and I feel it could have gone either way. Their fourth goal came against the run of play after we were on the march and had managed to get the game back to one goal, which was tough to take and meant we had to pull the goalie slightly earlier than I’d hoped.

I thought Ross Connolly played a really solid, smart game and managed the puck very well. He was a dominant player for us. There are plenty of positives this evening despite the result.”