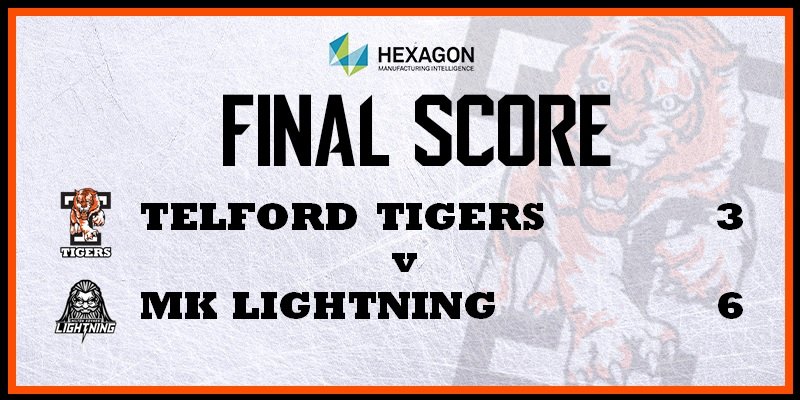 Tigers Hit By Lightning Storm. Hexagon Telford Tigers returned to home ice at Telford Ice Rink on Sunday night after a hard-fought 4-2 victory on the road against Leeds Chiefs which saw Telford extend their winning streak to six games. Tigers led the league by eight points at the start of play and took on Milton Keynes Lightning for the second time at home this season. Tigers had lost the previous meeting between the two teams in Milton Keynes but had won a hard-fought contest the last time the two sides met in Telford.

Tigers had lost Ollie Lord through injury just before Christmas and he joined Jonathan Weaver, and Ross Kennedy on the sidelines.

The first period was a scrappy one with both teams unable to get any fluidity in their game. Tigers almost benefited from some good fortune early on when a harmless shot deflected into the path of Jason Silverthorn in front of goal but the Tigers’ captain could not control the puck and ended up shooting wide. Silverthorn then led a breakaway with Florian but the final pass in the move was broken up by a well placed Milton Keynes’ stick. The first power play of the game went to Milton Keynes and saw the opening goal of the game. Andy McKinney was called for slashing, giving the Lightning a man advantage. A lucky bounce from a Liam Stewart shot fell the way of Harry Ferguson to tap in to give Milton Keynes the lead.  Shortly after, another Stewart shot went in and out of the glove of Day and trickled wide, with the Tigers’ netminder breathing a sigh of relief as the puck was cleared. Tigers were again close to going further behind when a goalmouth scramble saw Day beaten and the puck cleared off the line by McKinney. In the 18th minute, Tigers’ luck ran out when a shot from the blue line by Ferguson beat Day, who was screened by Leigh Jamieson, and he could not react in time to stop Milton Keynes doubling their lead.

Tigers needed the next goal in the contest to stand any chance of a result and the goal duly arrived in the 28th minute. Andy McKinney battled magnificently to the front of the net, fending off a Milton Keynes’ defender and buried the puck past Lawday. Just when Tigers looked to have some momentum, they conceded again. Day came out behind his net to play the puck and sent it around the boards where Russell Cowley took possession and passed to Stewart who shot high into the net to restore Milton Keynes’ two-goal lead. The frustrating nature of conceding the goal caused Tigers to lose their heads and concede two poor goals within a minute. The defence got caught out with a pass through the middle, allowing Cale Tanaka to skate in on goal and score with a low shot. Shortly after, a Ben Russell shot from the blue line beat Day, who again didn’t move as the puck was shot into the top corner for Milton Keynes’ fifth goal.  Tigers’ coach Tom Watkins responded by calling a time out and immediately replaced Day with back up netminder Massimo Agostini. Tigers responded with a goal just thirty seconds later. James Smith sent Andy McKinney clear, McKinney found Scott McKenzie with a perfect pass for McKenzie to tap home to reduce the deficit to three goals.

Tigers’ defence had not learnt their lesson and once again allowed Stewart a free skate on goal. Agostini making a superb save to deny the Milton Keynes’ forward.

Tigers’ frustration was beginning to show as first Adam Taylor and then Thomas McKinnon took penalties. Tigers then lost the services of McKinney for 10 minutes as the buzzer sounded to end the period. McKinney took exception to a non-call from referee Wells and was given an unsporting conduct penalty.

The third period proved a frustrating one for Tigers with plenty of possession and shots on goal but no luck. Several shots were blocked by Milton Keynes who were defending well.  Tigers’ forwards were snatching at chances, Silverthorn and McKenzie both missing from close range followed by Florian with two chances that were saved.

As hope was fading, Tigers gained a lifeline with a third goal. Florian setting up Joe Aston to score from close range to make the score 5-3 to Milton Keynes.

Tigers’ hopes of a comeback were ended five minutes from the end of the game when Robin Kovar scored with a shot that bounced off the crossbar and into the net to seal the game and finish a disappointing performance with a deserved Milton Keynes victory.

Tigers’ lead at the top of the table is cut to six points with twenty-nine games played.

Man of the match: Massimo Agostini.

After the game Head Coach, Tom Watkins commented, “I certainly can’t fault our effort and desire tonight, we didn’t get the win we wanted but we stepped up our game after a slow start in the first period and played with great energy backed up by the Tigers’ fans tonight. Despite the loss, I thought we really put in a shift. Special teams weren’t in our favour this evening and the power play was simply not good enough, which I think was a big difference to the outcome, I felt we limited Milton Keynes to a couple of chances which they scored on, where tonight we weren’t good in front of their net. That’s hockey, it happens.

We’ve had a great season to date and I think we’ve squeezed a huge amount out of this group this far. We’ll regroup, rest for a few days, enjoy the New Year and aim to bounce back next weekend. I thought young Massimo Agostini played very well and made some big saves, none bigger than the breakaway save on Stewart. They’re his first minutes this season and I’m very pleased he was able to make a positive impact.”

Hexagon Telford Tigers 1 will next be in action at home on Saturday 4th, January against Sheffield Steeldogs. Match Night tickets available to purchase here!