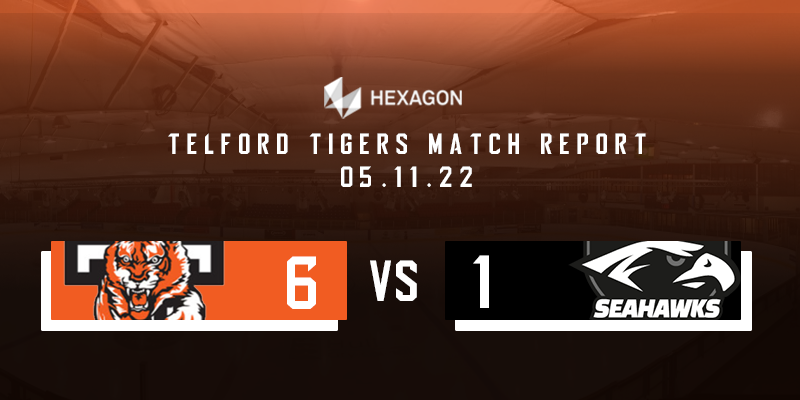 Tigers Hit Seahawks for Six. Hexagon Telford Tigers faced off against the Hull Seahawks on Saturday evening. Tigers had finally broken their recent run of poor home form with a thumping victory over Bees in their previous game and were looking for a similar performance against bottom team Hull.

The Seahawks had received some good news prior to the start of the game with their import forward Emil Svec finally receiving a work permit and allowed to enter the country.

Tigers were still without Jonathan Weaver, Jack Watkins and Deakan Fielder for the game. Scott McKenzie also missed out.

Tigers made the perfect start to the game by scoring on their first shot at goal. With just over a minute of the game gone, Finley Howells broke into the Hull defensive zone and hit a wrist shot that flew past Dom Smith in the Hull goal to open the scoring. Within two minutes, Tigers doubled the lead. Howells sent a pass cross ice to Vladimir Luka who hammered a first time shot past Smith for the second goal.

The final goal of the period was scored by Telford and Luka scored his second of the night with a superb solo effort. The veteran Tigers’ forward took possession of the puck at the Hull blue line, skated past two defenders, and back handed the puck over Smith’s shoulder and into the net for Tigers’ third goal of a dominant period.

Early in the second period an awful hit by Svec saw Rhodes Mitchell-King injured and unable to continue. Svec hit Mitchell-King with a check to the head, causing Mitchell-King to be flat on the ice for several minutes before he managed to skate off to the dressing room for treatment. Danny Rose and Bayley Harewood both went after Svec but Hull’s Nathan Salam and Declan Balmer intervened to stop them. Svec was given a match penalty and ejected from the game. Harewood and Balmer received offsetting penalties meaning Tigers had a full five minutes power play. Things got worse for Hull as Salam was called for tripping a minute into the power play giving Tigers a two man advantage.  Tigers scored their fourth goal whilst on the subsequent 5-on-3 power play – Luka completing his hat trick with a shot from the slot after being set up by Howells again.

For the rest of the period Tigers lost their poise a little and let Hull back into the game, allowing them to pull a goal back late in the period. Sam Towner scoring with a scrappy goal to put the Seahawks on the score board.

Tigers continued to dominate in the third period and added a further two goals. Jason Silverthorn forced a turnover from a Hull defender and then calmly shot the puck low past Smith for Tigers’ fifth.  Howells then scored his second of the game, shooting through Smith from close range after being set up by Luka. Both Tigers’ forwards continued their recent run of good form and ended the game with four points each.

The game petered out at the end with both teams taking some needless penalties but Telford convincingly won the game and took a deserved two points.

After the game Head Coach Tom Watkins, commented, “It was a good result, we got on the score board early and backed that up with some well taken goals in the first ten minutes.

We started with a limited bench then lost Nick Oliver and subsequently Rhodes Mitchell-King so with only three defensemen, I had to move Silvs (Jason Silverthorn) back there although he was very impressive and looked like someone who played there all his career. It leaves us with only eight forwards, so I’ll be on my phone a lot trying to find some extra guys for the next game.”