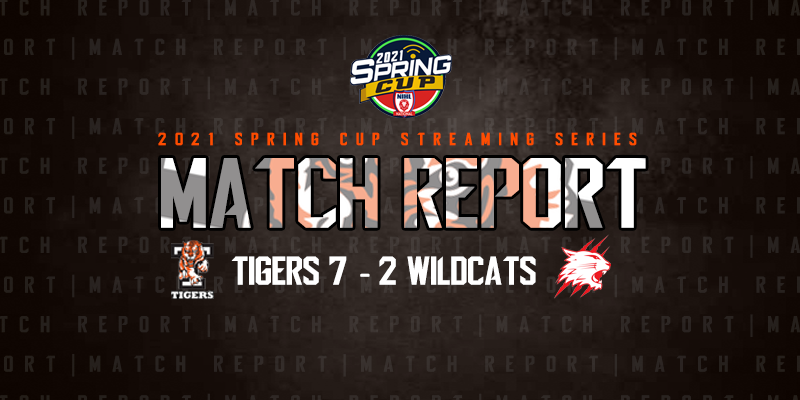 Hexagon Telford Tigers took on Swindon Wildcats on Sunday afternoon at Telford Ice Rink, just twenty four hours after handing the Wiltshire club a 9-2 defeat in Swindon. With Head Coach Tom Watkins warning the Telford players, prior to the game, that they would be facing a motivated team with a point to prove in the rematch.

Tigers had a full roster available with the exception of Corey Goodison.

Brad Day started in goal for Telford with Renny Marr in the Swindon net.

Swindon were clearly fired up from the first whistle. The Wildcats had the majority of the possession in the opening five minutes. Day was called into action numerous times to keep the scores level, including a terrific save from Swindon’s Chris Jones. But as with the previous game between the two teams, it was Tigers who opened the scoring. Tigers’ captain Jason Silverthorn won the puck on the Swindon blue line and sent a pass through to the unmarked Ross Venus who had time to fire a wrist shot low past Marr to put Tigers 1-0 ahead.

The game was very physical with both teams taking every opportunity to get hits in and the officials having to keep a close eye on proceedings to ensure it didn’t get out of hand. Swindon’s Jones was called for hooking midway through the period, giving Tigers their first power play opportunity. The power play unit was red hot, scoring four goals in Swindon the previous evening, and took just ten seconds to score Tigers’ second goal! A face off win by Silverthorn was passed to David Clements who fired a slap shot on goal which Silverthorn tipped through Marr’s legs to put Tigers two ahead. A late flurry of chances for Tigers was denied by Marr, including a terrific stick save from a Nick Oliver blue line shot.

Just forty four seconds into the second period, Tigers added a third goal. A well worked passing play between Venus and Ricky Plant left Silverthorn unmarked in the slot and able to shoot in off the cross bar to put Tigers 3-0 ahead.  Swindon managed to get on the scoresheet with a power play goal midway through the period. Oliver was sent to the penalty box for tripping and there was an element of fortune about the Swindon goal. Ben Nethersall sent a speculative shot on the Tigers’ goal which hit Jonathan Weaver square in the shoulder and looped over him past Day and into the net with the Tigers’ netminder unable to react in time to stop it.

Both team’s benches were frustrated by some non-calls by the officials and Tigers were left decrying their luck when Kieran Brown broke in on goal in the dying seconds of the period. His shot brilliantly beat Marr but was just after the buzzer to signal the end of the period.

Early in the third period Tigers lost the services of Cole Shudra after he was given a match penalty for kicking and ejected from the game. Brown was given a high sticking penalty on the same shift and Adam Jones for Swindon somehow escaped a penalty after clashing with Shudra meaning Tigers would face an extended 5-on-3 Swindon power play. Despite some terrific defending, the numerical disadvantage cost Tigers when Jordan Kelsall scored to reduce Tigers’ lead to one goal. With over three minutes of power play left, Swindon looked favourites to score next but a superb break out from his defensive zone saw Clements skate the length of the ice and fire a back handed shot over Marr’s pads to score a short handed goal putting Tigers 4-2 ahead. Once the penalty had been killed, Tigers took control of the game scoring their fifth goal. Robert Lachowicz sent Brown in on goal and the Tigers’ forward shot through Marr and into the net. A sixth goal followed and it was another power play goal.  Swindon’s Sam Godfrey was serving a checking from behind penalty when Brown and Venus combined to set up Scott McKenzie with a tap in from close range. Tigers added a seventh goal in the final minute of the contest. Fin Howells sent a brilliant pass to Austin Mitchell-King who broke in on goal and sent a shot past Marr’s blocker to seal a terrific Tigers’ performance and maintain Tigers’ 100% record in the competition with a sixth successive victory.

Man of the match: Robert Lachowicz.

After the game Head Coach, Tom Watkins commented, “It was a much closer game than the scoreline suggests. We knew Swindon would come at us hard and up their game so when we ended the first period with a two goal advantage, I was pleased as I felt they put us under a lot of pressure. The game changed with the match penalty and got them back to one goal but a fantastic solo goal from David Clements on the 5-on-3 penalty kill really changed the game and restored our two goal lead. It certainly put the momentum back on our side and then the game swung in our favour further with some quick goals. It has been a very pleasing weekend.”