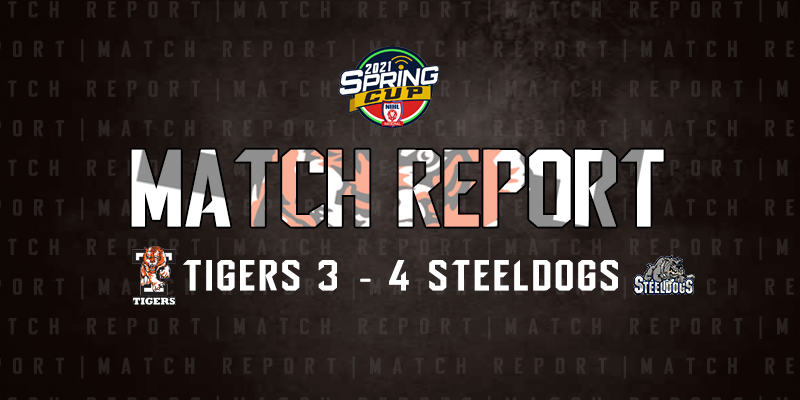 Tigers Winning Run Ends. Hexagon Telford Tigers faced off against Sheffield Steeldogs at Telford Ice Rink on Saturday afternoon. The clash between the top two teams in the Spring Cup has been much anticipated, with both teams coming into the game with a perfect record of six wins from six games.

Sheffield and Telford had both taken advantage of the Elite League not taking part this season and adding a number of Great Britain internationals into their rosters. Sheffield had made the most spectacular signing with Liam Kirk, who was the first English born and trained player to be drafted in the NHL by Arizona Coyotes and was on loan from the Peterborough Petes who play in the Ontario Hockey League in Canada. Tigers were without two key defensive players with Corey Goodison injured and Cole Shudra suspended.

Sheffield were without their usual netminder, Dimitri Zimozdra meaning that Jordan Lawday replaced him. The Tigers started with Brad Day in goal.

Both teams were straight into the game from the first whistle and a fast start boded well for a good game. Tigers were first on the scoresheet in the third minute. Ricky Plant deflected a pass into the path of Jason Silverthorn who broke in on goal but with Lawday anticipating a shot, Silverthorn slipped the puck to Ross Venus who fired a shot into the open net to give Tigers the lead. Sheffield did not let the setback affect them and without some terrific play by Day, would have equalised immediately. The Tigers’ netminder making a superb stick save from Alex Graham and keeping the Sheffield attack at bay.

Day could do nothing to prevent the Sheffield equaliser, however. Graham arrived late on a Sheffield attack and his shot from the slot hit Tigers’ forward Kieran Brown and deflected into the net past Day.

Two minutes later, Sheffield took the lead. A turnover by Ross Venus on the Tigers’ blue line allowed Ben Lake to find Ben O’Connor unmarked in the left circle and the Great Britain international buried a shot low past Day to put Sheffield 2-1 ahead at the break.

Tigers started the second period with an ill-advised penalty. Silverthorn was called for a cross-check but the officials chose to ignore the retaliation from the Sheffield player and only awarded one penalty. The Tigers almost managed to kill off the penalty but as the Sheffield power play entered the final thirty seconds, a Jason Hewitt shot from the right circle went in off Day to increase Sheffield’s lead to 3-1. Tigers were getting frustrated and saw Kieran Brown injured by a late hit from Sheffield’s Lake with Brown having to leave the game and Lake lucky to avoid more than a boarding penalty.

Tigers pulled a goal back midway through the period with a terrific move. Ricky Plant sent a hard pass towards goal and Silverthorn used the speed on the pass and managed to deflect the puck with the blade of his stick over Lawday and into the roof of the net.

The third period opened with Brady Doxey missing a glorious chance for Sheffield, shooting wide with only Day to beat. Tigers were then handed a chance to level the game with a 5-on-3 power play. Hewitt and Salem were in the penalty box, giving the Tigers almost two minutes of power play time with a two-man advantage. The power-play unit had been disappointing so far but Jonathan Weaver found David Clements who passed to Venus low down and the Tigers’ forward scored from close range to level the game.

With both teams pushing for the winner, the Tigers were left cursing their luck when a shot from Silverthorn was deflected towards goal but trickled wide of the post and Clements hit the puck straight at Lawday when well placed. Sheffield always looked dangerous and scored what proved to be the game-winner five minutes from the end of the period.  Liam Kirk’s shot rebounded off Day and Jonathan Phillips scored from close range. The Tigers’ bench was irate as they believed the puck hadn’t crossed the line but the goal was given.

Tigers pushed hard for the equaliser and came close several times but eventually ran out of time and saw their unbeaten start to the tournament end.

After the game, Head Coach, Tom Watkins, commented, “It was a really fast-paced, energised game of hockey with a lot of talent on show for both teams. Both teams had some periods of the game where they were able to assert themselves and take control. I’m disappointed for our players to be on the losing side to a goal that is a little controversial as I don’t think anyone can be sure the puck fully crossed the goal line. I thought the team really grafted all night and didn’t deserve to lose. We had some great opportunities that we didn’t take advantage of which would have ultimately changed the game but that’s hockey and you always have to look for a positive response from setbacks which I think we got from everyone.”