Tigers suffer back to back defeats. 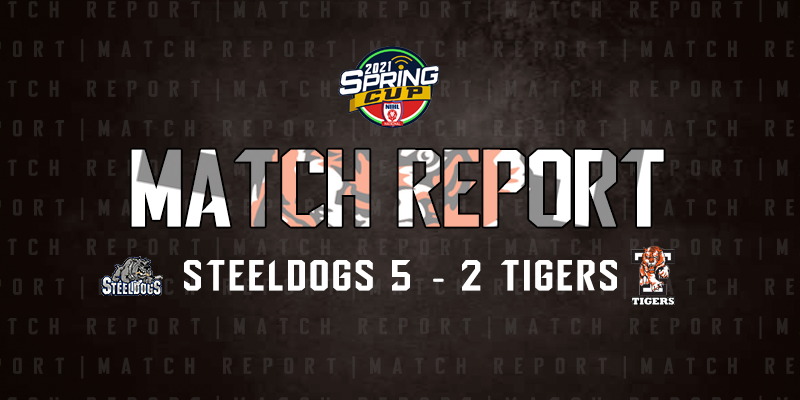 Tigers suffer back to back defeats. Hexagon Telford Tigers travelled to Ice Sheffield on Sunday to play the second of their back to back games against the Sheffield Steeldogs.  Tigers had seen the Yorkshire side take their unbeaten record the previous day with a hard-fought 4-3 victory with the game only decided in the final five minutes.

The previous game between the two teams had been very close and this game continued in the same vein. Tigers started well and had two early power-play chances in the first five minutes of the game. The second power-play saw Tigers take the lead. Kieran Brown’s shot was blocked by Lawday but the rebound landed perfectly for Austin Mitchell-King to slam home.  Tigers owed Brad Day for keeping Sheffield out as he made save after save including an acrobatic save from Jason Hewitt which bounced off his mask. But Tigers were left kicking themselves as the period was reaching the final stages and with Telford on a power play, Sheffield drew level. Tigers lost the puck on the Sheffield blue line and allowed a break-in on goal where Hewitt shot past Day to equalise whilst short-handed.

An even second period was starting to get fractious with a lot of aggression between the two teams who realised the importance of the two points and both officials had to keep a close eye on proceedings to ensure things didn’t get out of hand.  Sheffield took the lead midway through the period with an unmarked Alex Graham able to beat Day with a low shot and put Tigers on the back foot. Tigers were under the cosh and Sheffield had a lot of possession but the defence and Day stood firm.  Tigers’ captain Jason Silverthorn led one final break with twenty seconds of the period left and did brilliantly to retain puck possession when under pressure from two Sheffield defenders. Silverthorn found Brown who sent a pass across goal to Ricky Plant who tipped the puck past Lawday to equalise, sending Tigers into the dressing room level at 2-2.

A disastrous start to the third period left Tigers chasing the game.  Sheffield scored two goals in the first two minutes of the period.  Ben Lake getting a tip on a long-range Ben O’Connor shot and James Spurr scoring from close range to put Sheffield 4-2 ahead. Tigers were up against it and struggled to get any decent scoring chances.

O’Connor scored a late slap shot goal to seal the game at 5-2 and, despite Tigers having a 5 on 3 power play to finish the game, they could not beat Lawday and fell to consecutive defeats.

Man of the match: David Clements.

After the game, Head Coach, Tom Watkins, commented, “We made a poor start to the third period which cost us tonight. I think we gave up some soft goals against a team that are very capable offensively. They didn’t need any help with the talent they have but we gave them a couple of gifts tonight. Games are won and lost on mistakes and, unfortunately, we made more than Sheffield. They were tough to break down and we didn’t really get too many good opportunities or overly threaten from inside the dots. The team never quit and battled all night, the attitude was right, the commitment was there and perhaps with a full bench the results this weekend might have been different.”