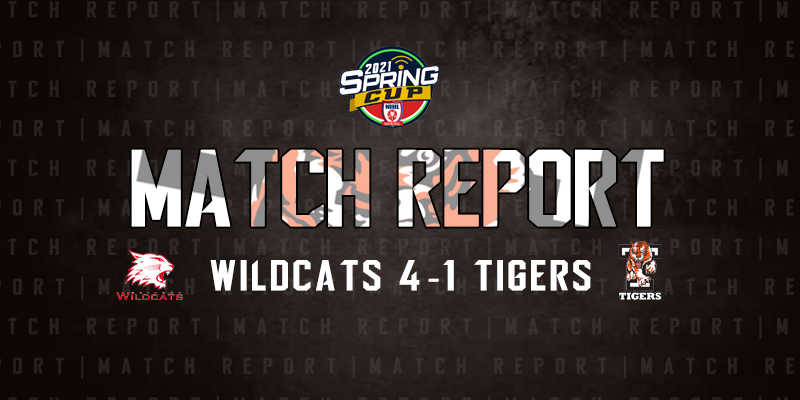 Tigers Fall to Third Cup Defeat. Hexagon Telford Tigers travelled to the Link Centre to take on Swindon Wildcats in a Spring Cup match on Friday evening.  Tigers had beaten Swindon twice in the previous match-ups between the sides and despite coming into the game off the back of consecutive defeats against Sheffield, Telford were confident of returning to form.

Tigers welcomed Cole Shudra back from suspension but were still without Corey Goodison and Dan Mitchell.

Jordan Hedley started for Telford in goal with Renny Marr in goal for Swindon.

Tigers made a sluggish start and were behind in just the second minute of the game. Jordan Kelsall taking advantage of some space in front of goal to fire a wrist shot past Hedley and in off the cross bar. Tigers were off their game for most of the period but had a glorious chance when Scott McKenzie was unmarked with just Marr to beat but couldn’t elevate the puck past the Swindon netminder who saved two shots with his pads to deny the Tigers’ forward.

Tigers started the second period in disappointing fashion conceding a goal with just a minute gone. A long range shot by Swindon’s Sam Godfrey hit Ricky Plant’s stick and deflected past Hedley into the net.

Tigers fought back five minutes later with a superb goal. Kieran Brown skated the puck behind the Swindon goal and drew three Swindon players towards him but as the players waited for Brown to pass to the left of the goal he sent a back handed pass to the right of the goal where the unmarked McKenzie was perfectly placed to slam the puck past Marr to give Tigers hope.

Swindon looked the most likely to score next and but for some terrific saves from Hedley would have been out of sight.  One save from a Reed Sayers’ shot saw Hedley save a certain goal with an acrobatic dive across his goal crease.

As Tigers pushed for an equaliser Swindon were always looking dangerous on the break and Hedley was called into action early in the third period, saving from a Sam Bullas breakaway.  Tigers just couldn’t create a chance to get back into the game and it was not surprise when Swindon scored through Ben Davies, who finished off a 2-on-1 passing move from close range, to put Swindon 3-1 ahead.

A disappointing period and a lacklustre performance ended with a late goal from Tomasz Malasinski, sealing a deserved Swindon win and sending Tigers to a third consecutive defeat in the competition.

Man of the Match: Robert Lachowicz

After the game Head Coach, Tom Watkins, commented, “We got outplayed tonight from start to finish, Swindon simply outplayed us all night. They did a great job of shutting us down, creating a ton of chances and without Jordan Hedley keeping it close it would have been a bigger defeat, there isn’t a lot more to say. We have a day off on Saturday and look forward to putting in an improved performance on Sunday against Bracknell.”