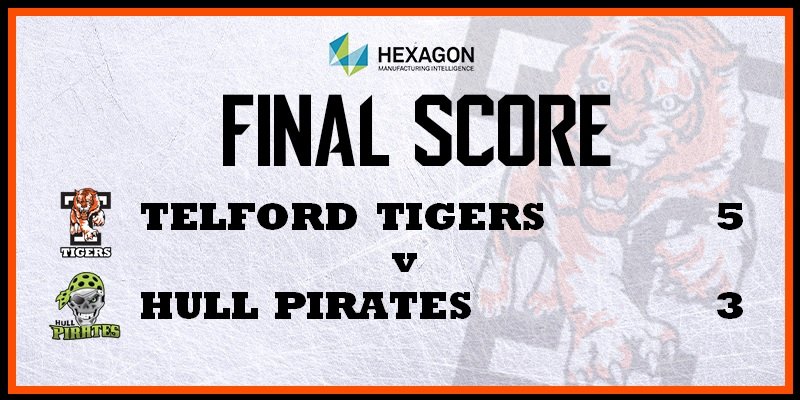 Tigers Leave it Late to Sink Pirates.  Hexagon Telford Tigers faced off against Hull Pirates on Sunday night at Telford Ice Rink in an NIHL National Division game. The two teams had faced each other on the previous Sunday, in Hull, with the Pirates winning in overtime.  Tigers came into the game off the back of a hard-earned point in an overtime loss to Basingstoke Bison. Tigers fought back from a 3-0 deficit to force overtime. The team welcomed back captain Jason Silverthorn for his first home game since September with Brandon Whistle also returning after missing the game against Hull last week. Tigers were also able to add James Smith, Callum Griffin, Ben Washburn, Brandon Anderton Jordan Jolly and Liam Preece to the lineup but were still without Jonathan Weaver, Adam Taylor, Ollie Lord, Ricky Plant, Andy McKinney and Joe Aston.

Tigers made a very slow start to the previous game against Basingstoke but were the opposite against Hull. In just the 2nd minute of the game, Tigers took a deserved lead after Dominik Florian played a perfect drop pass to Scott McKenzie who fired the puck over the glove of Smith and into the net. Tigers extended the lead in the 12th minute and were the beneficiaries of a fortuitous bounce of the puck. Corey Goodison hit a harmless shot wide of the goal but the puck bounced off the backboard and landed on the other side of the goal, with Smith unaware of the whereabouts of the puck, Jed Moreland chipped the puck into the open goal from close range. Tigers’ dominance continued in the 14th minute with a deserved third goal. The puck broke kindly in the centre of the offensive zone for Moreland to skate onto and hammer past Smith. Hull immediately called a time out to break Tigers’ momentum. The onslaught on Hull’s goal continued, with Tigers shooting from all angles, but they were unable to get another goal. Florian came closest by hitting the cross bar with a rising wrist shot to end the period.

Tigers started the 2nd period on top and should have taken a further lead when Whistle set up Fin Howells in front of goal but his shot went over. The period becme more scrappy as the officials started calling more penalties but they missed a clear slash on Florian that drew howls of derision from the Tigers’ fans. Hull’s Peter Fabus was given a hooking penalty in the 29th minute putting Tigers on the power play. Whistle’s shot bounced off the pads of Smith and landed perfectly for McKenzie to smash home his 2nd goal of the game and give Tigers a 4th goal and a convincing lead. Hull finally got on the scoresheet in the 37th minute, whilst on the power play after Griffin had been called for high sticking. Bobby Chamberlain ramming the puck home from close range after a scramble in front of Day. The goal gave Hull some momentum and they went close again as the period ended with Day called upon to make a strong pad save to keep out Hewitt. Tigers ended the period 4-1 ahead and wary of the threat of Hull’s dangerous forward line.

Tigers got caught cold at the start of the 3rd period conceding 2 minutes into the period.  David Norris’ shot was saved by Day but Sam Towner was first to the rebound to tap the puck home. Shortly after, Hull scored their third goal after Tigers failed to clear the puck from their defensive zone. Fabus found Lee Bonner unmarked in the left circle and the Hull forward sent the puck over Day’s glove into the top corner of the net to draw the visitors within one goal of the Tigers. Hull pressed forward and had several power play opportunities when Corey Goodison was called for a check from behind, closely followed by Florian being called for a cross check. Tigers battled resolutely and killed off the penalties. As the game entered the final minute, Hull got caught out when trying to get their net minder off for an extra attacker. Smith had not yet left the ice before a Hull attacker came on and Hull were assessed a too many men penalty. This gave Tigers a late power play but Hull immediately took Smith out of goal to gain an extra attacker, leaving the net empty. Despite a face off in the Tigers’ defensive end McKenzie was able to win the puck and clear it. Whistle then found Florian unmarked in the neutral zone. Florian skated in on the empty net and, despite a Hull player throwing their stick at him, Florian was able to shoot the puck into the empty net to score Tigers’ 5th goal and seal a nail-biting victory.  The win extends Tigers’ unbeaten home record and a second consecutive 3 point weekend keeps Telford in 2nd place in the league behind leaders Swindon by 3 points, albeit with a game in hand on the Wiltshire club.

After the game Head Coach, Tom Watkins commented, “It was another night where we were up against it, but ground it out and got the job done. Perhaps there was a little more pressure on us tonight after we had slipped to back-to-back defeats, away to Hull and Basingstoke, both in overtime. It was massively important to get a good start after a slow start on the road last night. We were really solid defensively in the first period which gave us a platform to take control of the game. After killing back-to-back penalties and then scoring on the following power play in the second period, I think most people would have expected us to cruise to an easy win. Hull got themselves right back into the game and with plays for Hull, we had to be very resilient, remain calm and stick to doing the little things to see out the game. The team did a good job to manage the game at that point and see us to victory.”

Hexagon Telford Tigers 1 will next be in action on home ice on Sunday, 17th November against Milton Keynes Lightening. Match Night tickets available to purchase here!