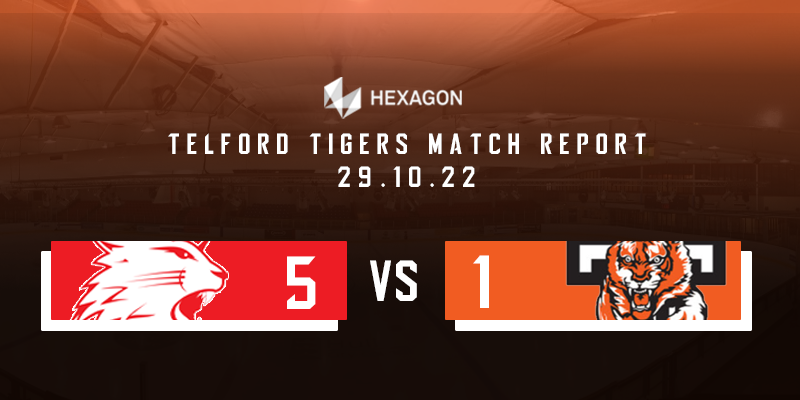 Tigers Left Cursing Their Luck After Swindon Defeat. Hexagon Telford Tigers travelled to Wiltshire to take on the Swindon Wildcats just a few days after Tigers had beaten Swindon with their best performance of the season so far.

Tigers remained without Jonathan Weaver, Deakan Fielder, and Jack Watkins. Ryan Lewis was unable to travel so Tigers added u18 Matty Bryne to the roster as backup netminder.

The opening period was even with both teams having chances. Early on Brad Day was called on to keep Swindon’s attack out and at the other end Renny Marr made a couple of saves from Tigers’ forwards.

Swindon opened the scoring in the fifth minute and Tigers suffered a moment of misfortune. Danny Rose was skating back towards the Tigers’ blue line and lost his balance, allowing Swindon’s Aaron Nell to skate in on goal, unchallenged and shoot low past Day to give Swindon the lead.

Tigers hit back and gained their own slice of luck with the goal that the levelled the game. Jake Price sent the puck into the corner behind the Swindon goal and with two Swindon defenders going after it, the puck bounced off the boards, went behind them and landed perfectly for the unmarked Tom Byrne to slam home the equaliser.

Late in the period Tigers were indebted to Day again as he made a brilliant save from a Tomas Malasinski shot.

A very close second period was heading into the final five minutes when Scott McKenzie was called for interference and Swindon handed a power play. Swindon caught Tigers out when they were making a line change midway through the power play, allowing Nell to break away again and score.

Worse was to follow as just moments later Colby Tower sent a pass from behind the Tigers’ goal to Russell Cowley who shot past Day to double Swindon’s lead. The deficit was undeserving but left Telford with it all to do in the third period.

With Tigers having to chase the game, Swindon played sensible possession hockey and chipped the puck into the Telford defensive zone and used their forecheck to run the clock down. A battle for possession behind the Tigers’ goal saw the puck break free and Reed Sayers added a fourth goal for Swindon. With the game over as a contest, Swindon added a late fifth goal through Chris Jones to put a gloss on the scoreline.

After the game Head Coach Tom Watkins, commented, “It was not our night, we worked hard and didn’t get many bounces go our way and we hit the post a few times. That would have helped if they had gone in for sure, but we kept battling. It was not our best performance and far from our worst. If a couple of bounces, go our way it’s a different game but that’s hockey. It was our fourth game in seven days and the effort was there, we competed hard but lacked a bit of quality in some key moments.”