Rose Blooms as Tigers’ Get Back to Winning Ways 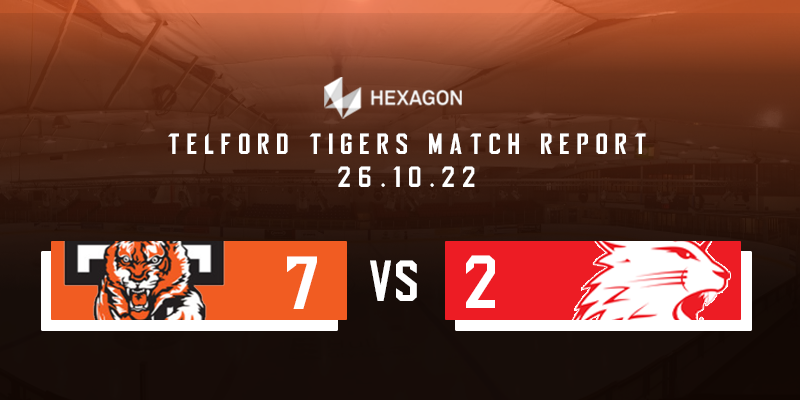 Rose Blooms as Tigers’ Get Back to Winning Ways. Hexagon Telford Tigers faced off in a midweek game against last season’s league runners up Swindon Wildcats. With Tigers having lost their last three home games, they were looking to bounce back. Telford were still missing Jonathan Weaver, Deakan Fielder and Jack Watkins but added Joe Aston to the lineup.

Tigers were the better side in the opening stages of the game but fell behind to the first Swindon effort on goal. Colby Towers shot into the top left hand corner of the goal with Brad Day screened and unable to see the puck until it had gone into the net. Telford were left cursing their luck shortly after when a breakaway by Jake Price saw the Tigers’ defender hammer a shot off the post and bounce away, allowing Swindon to break up the other end and score through Russell Cowley.

Tigers hit back midway through the first period with a well worked goal to halve the deficit. Vladimir Luka found Fin Howells low down by the Swindon goal and the Tigers’ forward drilled a low shot past Renny Marr from a tight angle to give Tigers their first goal of the contest.

Swindon’s Ben Nethersall was called for slashing, giving Telford a power play chance. After dominating possession during the man advantage, Tigers scored. Scott McKenzie’s shot was saved by Marr but the rebound fell to Ricky Plant who steered the puck through Marr’s legs and it trickled behind him and over the line to draw the sides level.

Tigers dominated the second period, playing their best hockey of the season so far. A hooking penalty for Chris Jones gave Tigers a power play in the opening minute of the period. Once again, Tigers cashed in with the man advantage. Plant sending a pass from behind the goal to McKenzie who hammered the puck past Marr to put Tigers ahead. Shortly after, Tigers had a fourth goal. Good work by Bayley Harewood set up Plant to shoot over Marr and double the lead.

A further Swindon penalty – Loris Taylor for interference – was punished by the Tigers’ power play unit. Danny Rose blasting an unstoppable slap shot from the blue line past the unsighted Marr. Midway through the period, Tigers added a sixth goal. Luka forced a turnover on the Swindon blue line and shot at Marr who saved the shot but Jason Silverthorn was on hand to force the puck home. The goal was initially not given but after the officials conferred, they awarded the goal.

Swindon reacted by changing their net minder to Dean Skinns.

The contest threatened to boil over late in the period when Reed Sayers caught Sam Watkins with a late hit which Rose objected to and cross checked Sayers. Tyler Plews went after Rose and the two exchanged punches resulting in both being given seven minutes of penalties to end the period.

Tigers sensibly saw out the third period, maintaining possession and running down the clock to gain a valuable, well deserved home victory and two points.

After the game Head Coach Tom Watkins, commented, “What a great night, it was a solid performance, brilliant atmosphere and great to get a home win! After falling two goals behind in the first five minutes the boys tied it up before the end of the first period and scored seven unanswered goals in total. Our power play was excellent, three goals from three power plays and I think both units moved the puck very well. I really liked how we played with a bit more crash and bang, more of a tenacious edge. We wanted a team performance, all round execution and we got just that from all the team, but especially Danny Rose, he is on a whole new level from any player I’ve seen this season and he gets better every game. The guy does it all: his work ethic is second to none, he’s physical, battles really hard, his patience and poise on the puck are of a very high standard and he’s running a very successful power play unit right now. The kid’s got serious game.”