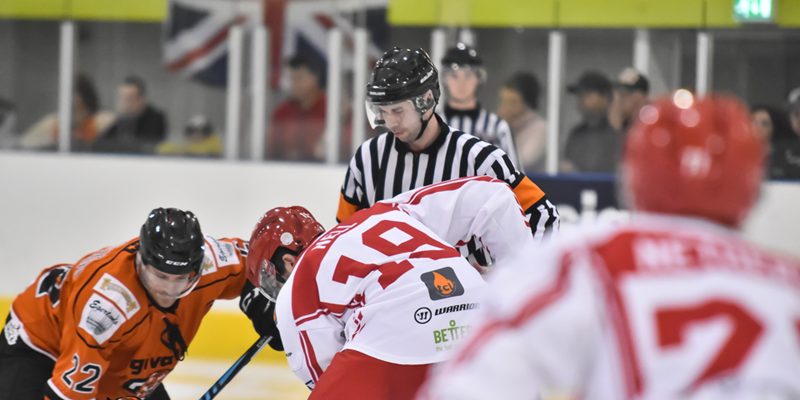 Telford Tigers 1 took on Swindon Wildcats in the second of back to back games in the NIHL Autumn Cup on Sunday night in Telford.  Telford had lost in Wiltshire 2-1 the previous night and were looking to beat their former EPL rivals for the first time this season.

Tigers were again without the suspended Jonathan Weaver and Joe Miller but added James Smith to the line up.

In the first period, both teams exchanged penalties early on and Tigers had good pressure on the Swindon net but without success. However, in the 12th minute with Warren Tait just leaving the   penalty box after receiving a tripping penalty, Tigers had a breakaway. Danny Rose sent a stretch pass to Ricky Plant who waited for Jason Silverthorn to gain the zone. Plant then made a perfect cross ice pass to Silverthorn who fired home to give Tigers the lead.  The period ended with both teams engaged in a physical battle, with Sam Bullas and Tom Watkins both given penalties for roughing after an altercation behind the Swindon net.

The second period started with an early chance for Swindon when former Tiger Phil Hill thought he had scored, but referee Stephenson had already blown the play dead before the puck entered the net. Tigers were coming under pressure as the period wore on and were forced into a penalty, when Corey Goodison was called for hooking. Swindon equalised in the 34th minute after just 26 seconds of the power play, through player coach Aaron Nell. Swindon then went close when Nell’s rising slap shot hit the bar, but Tigers held out to end the period level.

The third period saw both teams pushing hard for the winning goal and it was Swindon who scored in the 53rd minute to break the tie. Floyd Taylor scoring with a slap shot from in between the circles.  Tigers pulled net minder Dennis Bell in the last minute to give them an extra attacker but conceded an empty net goal in the final 20 seconds, when Silverthorn’s shot was saved by the Swindon net minder and cleared by  Swindon defender Steve Whitfield straight into the Tigers’ goal.

Man of the match – James Smith.

After the game Player Coach Tom Watkins said,” I think it’s tough to be on the back of a defeat. We played with more character tonight and I thought we had some decent chances to add a second goal. We lacked some quality at key times on the power play and particularly in the last 6- 7 minutes when we were chasing the game. Perhaps that’s a little inexperience in that we have guys who haven’t been in that position before where they are required to make a play, to make a difference. It’s all about wanting the puck and having confidence at critical times in the game.

Watkins added, “I’m naturally disappointed to lose the game and we have to find more offensive punch against a team who we have only scored 3 goals against in 3 games”.