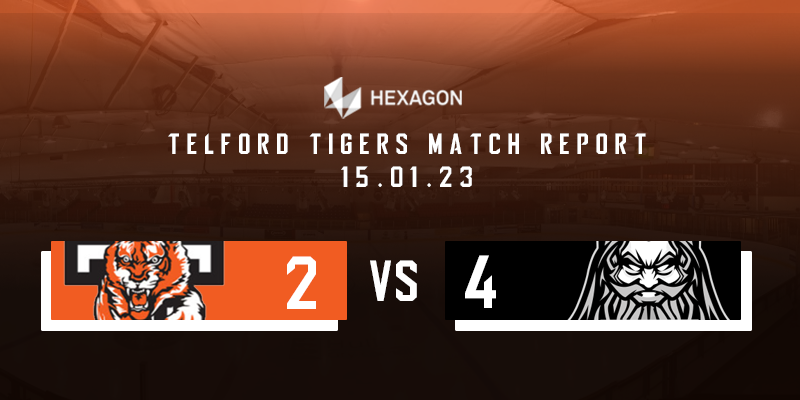 Tigers Lose Despite Strong Display. Hexagon Telford Tigers returned to home ice after a narrow loss in Basingstoke the previous evening. Tigers remained without Jonathan Weaver and Ricky Plant but added Charlie Webb to the line up.

Tigers played well during the first period and were unlucky to finish the period a goal behind. They were undone by a 5-on-3 power play goal for Milton Keynes. With Danny Rose and Jack Watkins in the penalty box Milton Keynes worked the puck to Liam Stewart who tapped in from close range.

Telford continued their good play and finally broke through midway through the game. Fin Howells sent Scott McKenzie into the Lightning offensive zone and he found the unmarked Vladimir Luka who hit a powerful wrist shot through Daniel Crowe in the Milton Keynes goal.

Lightning hit back within thirty seconds of the Tigers equaliser. Bobby Chamberlain shooting through a number of Tigers defenders to beat Brad Day.

A dubious too many men penalty called against Telford put them shorthanded again but it would be the home side that scored next whilst shorthanded. Rhodes Mitchell-King sent a pass from his own blue line to Howells who sent the puck across the ice to Luka to allow him to smash a shot past Crowe to draw the sides level.  But once again parity was not held for long. Milton Keynes were back ahead within seconds of the restart. With Milton Keynes still on a power play, Ross Green scored for the Lightning.

Tigers went close a number of times in the third period with Luka hitting the crossbar and Howells going close with a shot from in front of goal.

Milton Keynes sealed the game with a breakaway goal from Stewart ten minutes from the end of the game to send Tigers two goals behind.

Tigers pulled Brad Day from the goal for the final minute but could not make the extra attacker count.

Man of the match: Rhodes Mitchell-King.

After the game Head Coach Tom Watkins, commented, “I couldn’t ask for any more from the players this evening. I think we dug really deep to push a very talented, experienced team as far as we did. We gave it a great go and I think you could see we didn’t have the gas left to make a difference to the score sheet late in the third period but we kept pushing and pushing. We’ve had a very tough weekend, played at a very good level and unfortunately came up short but there were plenty of positives.”