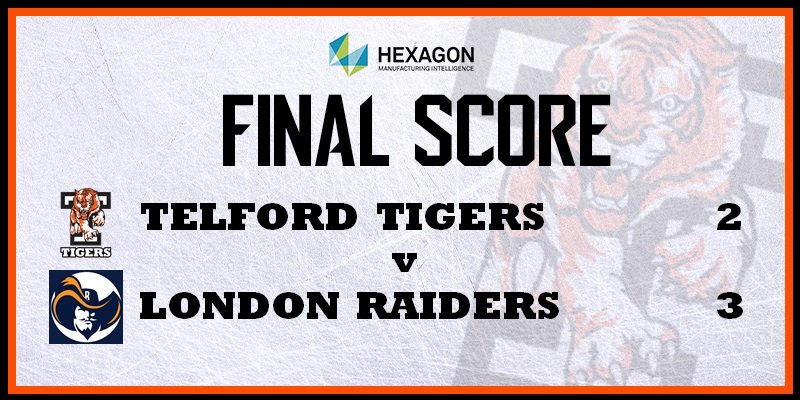 Tigers Lose Unbeaten Home Record. Hexagon Telford Tigers played the second of back-to-back fixtures against Raiders at Telford Ice Rink on Sunday night. This was the first-ever visit to Telford for the team from Romford and followed Tigers’ penalty shoot out win on Saturday in Romford. This was after the teams couldn’t be separated in regulation time or overtime. Brandon Whistle scored the crucial penalty, but Tigers once again had Brad Day to thank for the 2 points earned on the road.

Raiders’ team contained two ex-Tigers’ players from the team who won the league and cup double in 2015, Dan Scott and Blaho Novak, who both received a warm welcome back to Telford from the fans.

Tigers made a very sluggish start to the game and struggled to get their passing game going. Raiders looked dangerous on the break and opened the scoring in the 7th minute when Jack Flynn and Erik Piatak led a breakaway that ended with Piatak hitting a wrist shot past Day to give the Raiders the lead. Things got worse for the Tigers just over a minute later. A speculative shot on goal from Aaron Connolly deceived Day and surprised everyone in the rink by going into the net to extend Raiders lead to 2-0.  Tigers pushed to stem the flow of goals and had a couple of half-chances, Brandon Whistle shooting over when in a good position and Dominik Florian’s powerful wrist shot being saved by Gray. The period ended with Raiders 2-0 ahead and good value for their lead.

Tigers’ poor performance continued in the 2nd period, with Raiders playing a good defensive game and taking every opportunity to break when they could, Tigers’ passing continued to be misplaced and offensively the team were restricted to long-range shots and Raiders’ defense blocked shots when required. Piatak had a glorious chance to extend the Raiders lead but he shot over the goal. As the period entered the final 30 seconds, Tigers had time for one last attack. Brandon Whistle carried the puck into the Raiders’ zone and slid a pass cross-ice for Andy McKinney to fire home and give Tigers a goal and some momentum as the period ended.

Tigers gifted a 3rd goal to Raiders early in the 3rd period.  McKinney got caught on the boards with the puck in his defensive zone and was stripped of the puck by Brandon Ayliffe, who passed to the unmarked Piatak to score past Day. Tigers pressed to get back into the game and despite not playing well, managed to pull a goal back in the 55th minute. Adam Taylor pouncing on a chance when the puck came to him in front of goal, firing home to draw the Tigers just a goal behind. Raiders defended magnificently as Tigers took Day out of the net for the final 3 minutes of the game to have an extra attacker, with Gray in the Raiders’ net proving impossible to get past. A weary-looking Tigers team gave their all to try and get the equaliser but Raiders held on to earn a deserved victory and take the 2 points.

Man of the match: Nick Oliver

After the game Head Coach, Tom Watkins commented, “I’m disappointed to lose tonight and we can play better for sure, but credit where it’s due, Raiders played a solid road game and capitalised on their chances. We didn’t take our chances tonight where previously we have been clinical in front of goal. They countered quickly, stacked the neutral zone and did a good job of getting bodies and sticks in lanes in the defensive zone and to play that way you need good goaltending, which they got. It’s a loss, I’m not happy about it, we had a bad start but we’ll learn from it.

That’s only our second loss in regulation this season, despite the number of guys we’ve been without and of course our first loss at home this season which is a very impressive home record in a highly competitive league.”

Hexagon Telford Tigers 1 will next be in action on home ice on Saturday, 30th November against Leeds Chiefs. Match Night tickets available to purchase here!