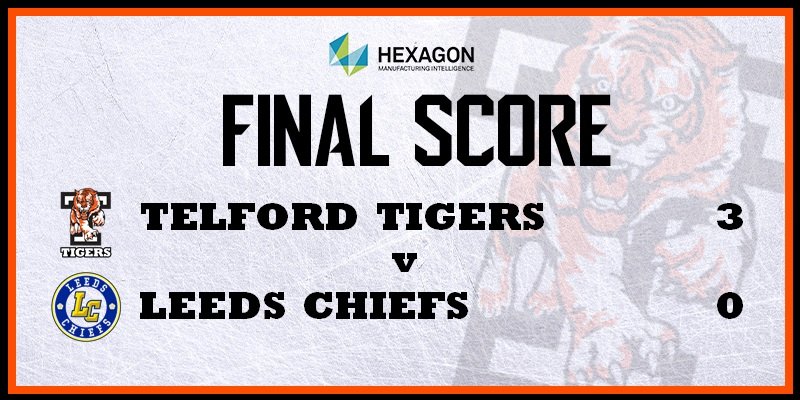 Tigers Top Table After Chiefs Victory. Hexagon Telford Tigers were looking to bounce back from their first home defeat of the season when they faced off against Leeds Chiefs on Saturday night at Telford Ice Rink. Tigers had lost their previous game 3-2 to Raiders and had the opportunity to go back to the top of the table after Basingstoke Bison had beaten leaders Swindon Wildcats on Friday night.

Tigers were able to ice an almost full roster. Only Jonathan Weaver remained inactive after the return of Ricky Plant and Joe Aston for the game.

A fast-paced game started with barely a whistle from the officials during the first 5 minutes of the game. Tigers went closest in the 11th minute when Adam Taylor’s rising shot rang off the post with Gospel beaten. Tigers opened the scoring in the 13th minute, whilst on the power play after Leeds’ Luke Boothroyd was given a hooking penalty. Tigers needed just 18 seconds of the power play to get on the scoresheet, Gospel made two terrific saves from close range, first from Jason Silverthorn, then from Fin Howells, but he could do nothing about the third shot, Scott McKenzie lifting the puck over the prone Gospel and into the net.  Day in the Tigers’ goal didn’t have a great deal to do but pulled off one terrific pad save from Brodie Jesson to keep Tigers ahead at the break.

The 2nd period saw Tigers dominate the possession and shot total but were unable to show this on the scoreboard. Gospel in the Leeds goal was proving difficult to beat, with Dominik Florian and Andy McKinney denied. Gospel then pulled off a magnificent double save from Silverthorn. Not to be outdone, Day pulled off an equally good save from a short-handed breakaway by Radek Meidl. Day stopped the first effort, then acrobatically blocked the follow-up effort. The period ended with no further goals and Tigers maintaining a narrow 1-0 lead.

The 3rd period saw Leeds have further chances on the break as Tigers pushed for the second goal. James Archer was denied by Day, closely followed by another Meidl breakaway that Day stopped. Leeds were made to pay for the missed chances when Ross Kennedy scored Tigers’ second goal of the night. The Tigers’ defender showed terrific stick handling to break into the Leeds defensive zone and drew a hooking penalty before the play was stopped, the puck was recycled to the front of the net where Kennedy pounced on the loose puck and slammed it into the goal.

Leeds had further breakaway chances when Richard Bentham and Ethan Hehir were sent clear on the Tigers’ goal but both were denied by Day. Tigers rounded off the evening with a short-handed goal three minutes from the end of the game to seal the victory. Brandon Whistle was serving an unsporting conduct penalty when Silverthorn passed to Ollie Lord, who hit a magnificent shot over Gospel’s glove and into the top left-hand corner of the net for Tigers’ third goal. The win takes Tigers back to the top of the league, ahead of Swindon by a point and with a game in hand.

After the game Head Coach, Tom Watkins commented, “It was a good win, an important win to get us back in the win column. I think the game was all about the goalies tonight. Both are very talented and made some big saves for their team. Unless you get bodies in front of Gossy, (Gospel) he’s stopping what he sees and when we established ourselves in the offensive zone, Sam was equal to everything we threw at him.

I’m really pleased for the team and Brad on our shutout tonight. It’s the first one this season, here’s hoping for many more.”

Hexagon Telford Tigers 1 will next be in action on home ice on Sunday, 8th December against Peterborough Phantoms for the annual Teddy Toss. Match Night tickets available to purchase here!