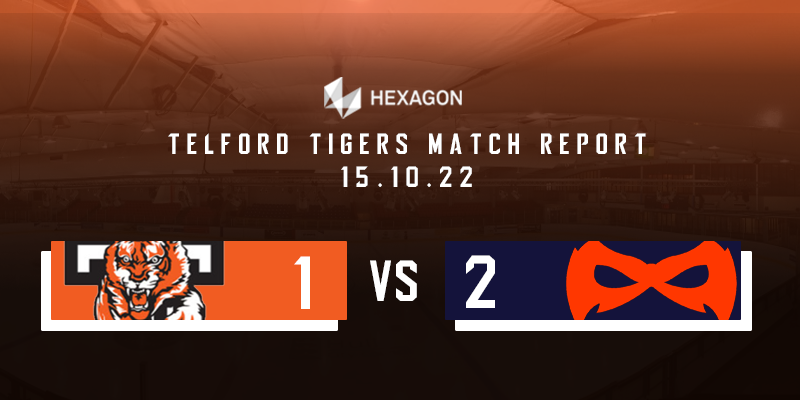 Tigers Pay the Penalty. Hexagon Telford Tigers were looking to get back to winning ways after losing their previous game to Milton Keynes. Telford remained without Jonathan Weaver, Deakan Fielder and Nick Oliver and also saw Jack Watkins unavailable for the game.

Tigers made a bright start to the contest and were unlucky not to take the lead when Vladimir Luka hit a shot that rang off the post. Much of the first ten minutes of the game went by quickly with barely a whistle stopping the game.

With Tigers having constant pressure on Jordan Marr in the Peterborough goal it looked like a certainty that Tigers would score first. But, it would be the visitors that took the lead. A breakdown of play in the Tigers’ defensive zone allowed Corey McEwan to shoot at Brad Day. The Tigers’ netminder made the initial save but the rebound fell to Joe Gretton to tap into the open net. Tigers hit back shortly after. Tom Byrne and Brodie Jesson broke away unchallenged on the Peterborough goal. Byrne drew Marr from the goal and sent a pass to Jesson who shot through Marr and into the net to draw the sides level.

A goalless second period saw Tigers’ players and the crowd get frustrated with referees Hand and Jarvie who seemed to penalise every Telford infraction but not apply the same to Peterborough. Fin Howells hit the post for Telford and Marr was called on a number of times to keep the scores level.

The third period saw penalty after a penalty awarded against the home side. With Jason Silverthorn serving a dubious high sticking penalty carried over from the end of the second period, Scott McKenzie was called for hooking, giving the Phantoms an extended 5-on-3 power play. Some superb shot-blocking and defensive skills saw Tigers kill off both penalties.

Lucas Price was then called for an extremely harsh boarding penalty which allowed Peterborough another power play chance. This time the Phantoms scored. Tom Norton’s shot was saved by Day but the rebound fell perfectly for Will Weldon to shoot into the open net.

Phantoms then had an opportunity to seal the game when a penalty shot was called but Lukas Sladkovsky’s shot was well saved by Day.

Tigers had five minutes left to get back level but another dubious call put Peterborough back on the power play after McKenzie was called for hooking and then given a ten-minute misconduct for his reaction to the call. After the penalty was served, Tigers were hoping to have the final minute of the game with an extra attacker but once again a penalty was called. Jesson was given an unsporting conduct penalty – the seventh penalty in a row against Telford – allowing the Phantoms to play out the remainder of the game and seal the victory.

At the end of the game, the officials left the ice to a chorus of boos from the home crowd.

After the game Head Coach Tom Watkins, commented, “It was a very frustrating game of hockey where we felt we were the better team when five on five. We played long periods short-handed through the third period after the officials were very quick to punish us and reward the Phantoms with power play time with several very soft calls. You only have to listen to the fans’ reaction that they felt it was very one-sided. That said our penalty kill was excellent but killing that amount of time takes away energy and momentum very quickly. We should have been a couple of goals to the good in the second period but could only find the metalwork.”