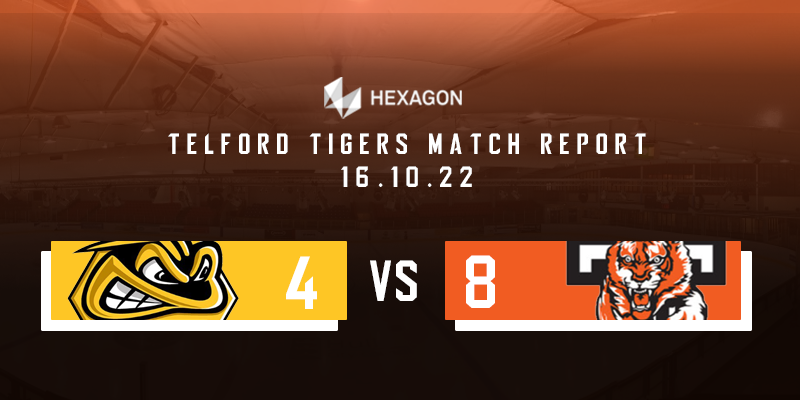 Tigers Swarm Bees. Hexagon Telford Tigers travelled to Slough on Sunday night to take on the Bees.  Tigers started the game with four players missing from the squad – Jonathan Weaver, Deakan Fielder, Nick Oliver and Jack Watkins were all unavailable. Tigers were pleased that Rhodes Mitchell-King was able to ice after missing the end of the previous game against Peterborough after taking a puck to the leg when blocking a shot. The game was delayed by fifteen minutes as the officials were late arriving after getting stuck in traffic.

When the game finally started it was certainly worth the wait for Tigers’ fans. In the opening five minutes of the game, Bees’ Stuart Mogg was called for tripping, giving Telford their first power play of the evening. Tigers took less than a minute to open the scoring. A shot from distance by Danny Rose was deflected expertly past Bees’ netminder Adam Goss by Jason Silverthorn to give Telford the lead.

Just ten seconds later the lead was doubled! A long-range shot from Corey Goodison hit the post and rebounded off the back of Goss and trickled into the net for Tigers’ second goal. Surprisingly, Goss was pulled from goal and replaced by backup netminder Dan Weller-Evans.

Goodison was then called for holding giving Bees a power play which they immediately scored on, Juha Lindgren shooting past Brad Day who was screened.

Tigers responded perfectly to the Bees pulling a goal back by regaining a two-goal lead within a minute. Mitchell-King shooting from the blue line with a perfect shot into the top corner of the goal.

Tigers then added a fourth goal. Goodison set up Ricky Plant for a low shot past Weller-Evans. Twenty seconds later Tigers had a fifth goal. A shot from Danny Rose was tipped by Fin Howells and saved by Weller-Evans. But as the Bees’ netminder made the save he kicked the puck behind him into the net with the goal being credited to Howells.

Tigers were then able to add a sixth goal and it was a memorable one for Tom Byrne who scored his first National League goal. Jake Price sent a shot from the Bees’ blue line in on goal and Byrne was perfectly placed to direct the puck over Weller-Evans into the roof of the net.

The final goal of the period was scored by Tigers for their seventh of the game. A thunderous shot from Vladimir Luka flew past Weller-Evans into the bottom of the goal. The puck was struck so hard that the officials took some time to retrieve it after it had got stuck in the netting. Bees reacted by returning Goss to the goal, to replace Weller-Evans for the rest of the game.

Bees came back to the ice for the second period, clearly fired up and were looking to put Tigers off their game. Fin Howells was given a harsh hooking penalty allowing Josh Martin to score the Bees’ second from close range.   Alan Lack then cross-checked Bayley Harwood and tried to goad him into a fight which Harewood ignored but bizarrely referee Ions gave Harwood and Lack matching penalties.

Bees hit back again with a third goal. Brendan Walkom broke away on the Tigers’ goal and lifted the puck over Day to send the Bees into the break having reduced the deficit to four goals.

The third period saw Tigers go close early on with Scott McKenzie hitting the post. An eighth goal was scored with five minutes of the game left. Harewood hitting a superb shot into the top left-hand corner of Goss’ goal after being set up by Sam Watkins.

A late Dominik Gabaj goal for Bees rounded off the scoring and Tigers saw out the game to seal the two points.

After the game Head Coach Tom Watkins, commented, “We got a fast start tonight, collectively every one was on their game from the start, played simple, moved the puck low to high and got bodies to the net. We were rewarded for our efforts and hopefully, it shows how simple the game should be. A 7-1 first period was a great start. Bees were then more dominant in the next 40 minutes, we again took too many minor penalties and need to learn to be more disciplined. In the last two periods, we lost 3-1. At 7-1, we should shut the game down and not allow a team to come back at us. That’s something for us to learn and improve upon.”