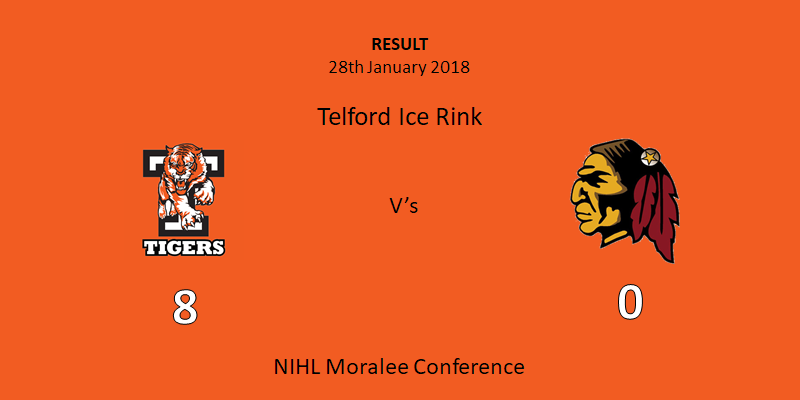 Telford Tigers 1 took on Whitley Warriors on Sunday night at Telford Ice Rink.  Tigers were still buoyant from the previous night’s 1-0 victory over leaders Sheffield Steeldogs which had reignited the NIHL Moralee Division title race.  Jason Silverthorn’s goal was the only difference between the two teams in a hard fought contest.  Tigers had previously recorded two wins against the Warriors this season and were looking for a 4 four point weekend in front of a packed rink.

The game was only 26 seconds old when Tigers scored the opening goal of the game. Whitley were on the attack but the play broke up and Jason Silverthorn skated away with the puck. Silverthorn played a perfect drop pass for Ricky Plant to blast home a one timer into the net with the first shot of the game. Tigers’ net minder Dennis Bell made a terrific sprawling save to deny Whitley on the power play.

Scott McKenzie then went close with two good opportunities but both were saved.

In the 13th minute Tigers added a second goal. Neat passing between McKenzie and Plant left Silverthorn with a tap in at the far post.

A third goal was scored in the 16th minute when McKenzie robbed a Whitley defender of the puck and skated in on goal before firing a wrist shot into the net.  Tigers then went close to adding a fourth goal when Filip Supa’s shot went through the Whitley net minder Richard Lawson but trickled agonisingly wide of the goal. Tigers ended a dominant period with a 3 goal lead.

The second period saw Tigers take the game away from Whitley.  In the 27th minute Tigers scored their fourth goal when Jordan Stokes’ shot from the blue line was only partially saved and Brodie Jesson was in the perfect position to tap home the rebound.  Whitley then changed their net minder with Mark Turnbull replacing Lawson. Just 2 minutes later in the 32nd minute, Plant scored his second goal of the night after a set up pass from Silverthorn to increase the lead to five.  In the final minute of the period Silverthorn added his second of the night when he tipped Plant’s pass into the roof of the net from close range.  Just 14 seconds later, Silverthorn set up Plant for his hat trick and Tigers’ seventh goal to end the period firmly in control of the game.

At the start of the third period Tigers changed their net minder with Bell being replaced by Jonah Armstrong. Tigers scored the eighth goal of the game in the 44th minute when Adam Jones fired a slap shot from the blue line which deceived Turnbull.

The game ended on sour note for Tigers when Supa accidentally skated into referee Pickett at centre ice resulting in Supa being stretchered off injured. Tigers completed the game and earned a second consecutive shut out and a four point weekend.

Man of the match – Ricky Plant

After the game Coach Tom Watkins said, “ It was a solid four point weekend and two shutouts. As a coach you can’t ask for more than that, so I’m delighted with the weekend’s work at both ends of the ice. Hopefully that adds a little pressure at the top of the table and with a big weekend coming up it’s a fun time to play and watch the Tigers.”

Watkins added, `”I don’t want to single anyone out this weekend but as a new guy to the team and having not played in some time, Nick Oliver had a very strong weekend and looks to be a very good addition to the team.  He looks comfortable on the puck, strong and made some good decisions. We played some good hockey tonight and loaded up the top line with Silverthorn, McKenzie and Plant who were a tough group to play against.”