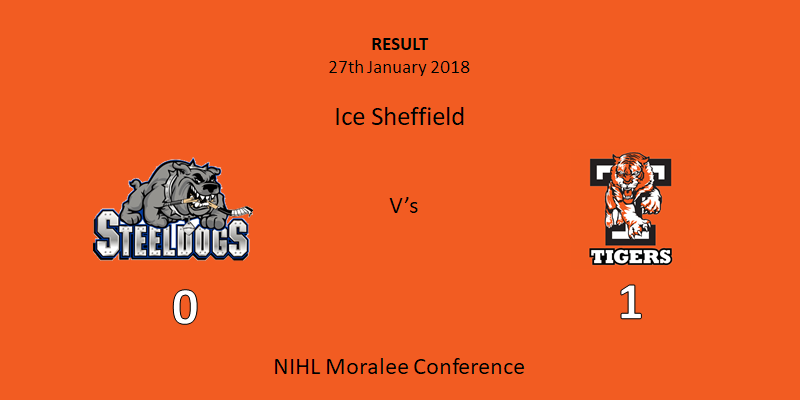 Telford Tigers 1 travelled to Ice Sheffield on Saturday night to take on the league leaders Sheffield Steeldogs in a vital clash between the two former EPL teams.  Tigers had recently qualified for the semi finals of the National Cup and came into the game aiming to reduce the Steeldogs’ six point lead at the top of the league.

The 1st period saw Tigers have a number of good chances.  Early on Filip Supa and Jason Silverthorn both forced Sheffield’s net minder Dimitri Zimozdra into making saves.  Down the other end of the ice, Tigers’ net minder Dennis Bell was also busy and at one point was left without a stick as he has dropped his and ended up using Adam Jones’ stick for a short passage of play, until Tigers could clear the puck from their defensive zone to allow Bell to retrieve the correct stick. Shortly after, Bell was required to make a big save from a Sheffield 1 on 1 to keep the score level.

Tigers took the lead in the 16th minute when Ricky Plant found Silverthorn in between the circles with a precise pass. Silverthorn fired the puck home with a perfect wrist shot to score the opening goal of the contest.

Dale White left the action before the end of the period when he got hit by a puck and was in clear pain as he limped off the ice. Tigers held out and ended the period with a slender lead.

In the 2nd period, Tigers started strongly with Scott McKenzie going close with a shot that Zimozdra saved with his glove. Shortly after, Silverthorn was sent clear on a break away but Zimozdra’s save prevented a goal.  Bell was then called upon to make a save whilst Tigers were on the only power play of the game, Sheffield won the puck off Plant and broke away with only Jonathan Weaver back for the Tigers. Bell made a terrific save with his pads to keep the Tigers ahead. Zimozdra was then called into action at the other end making a brilliant double save from Adam Jones’ slap shot followed by a save from Plant on the rebound. Tigers would end the period on top but with only a single goal lead.

The 3rd period was tense with both teams realising the importance of the 2 points in this game. Tigers went close when White’s slap shot was only partially saved but the rebound fell agonisingly out of the reach of Warren Tait. As the game entered the final 5 minutes, Sheffield pushed hard for the equaliser. Danny Rose made a brilliant stick check on his own blue line to prevent a Sheffield break away. Sheffield pulled Zimozdra from the goal for the final minute to add an extra attacker. Tigers faced a frantic last 25 seconds with Sheffield controlling the puck but the defence and Bell stood tall to keep them out and Bell recorded his 7th shut out of the season. Tigers secured a vital 2 points to cut the gap at the top of the table to 4 points with Tigers holding a game in hand over Sheffield.  Tigers’ players left the ice to a great reception from the sizeable following that had come from Shropshire.

Man of the match-Brodie Jesson.

After the game Coach Tom Watkins said, “It was a great performance and a great result. It’s really tough for a team to go from last weekend’s game against Deeside into a game that essentially keeps us in the title race, but we were ready and excited to play tonight. Watkins added, “We showed a lot of character tonight and I think our experience of playing in big games was very important, lots of guys blocked shots and played the right way for the good of the team. I asked for a 200 foot game from everybody and got it.”