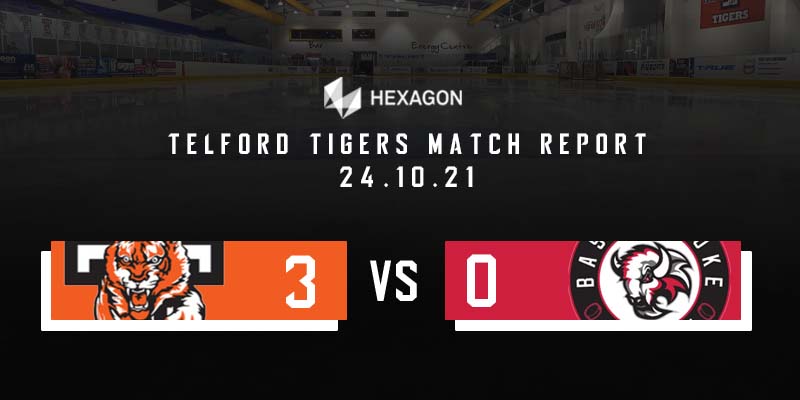 Tigers Shut Out Bison. Hexagon Telford Tigers returned to home ice after a narrow defeat in Sheffield on Friday evening and were still looking for their first win in the league this season. Tigers were still missing three of their most experienced players with Jonathan Weaver, Andy McKinney and Scott McKenzie all unavailable for the game.

Despite the recent disappointing form, Tigers couldn’t have asked for a better start to the game. Within the first two minutes Telford had the lead. Sam Watkins sent a shot in on Alex Mettam in the Basingstoke goal which the netminder blocked with his pads but Thomas McKinnon was first to the rebound and slammed the puck into the net. With Tigers catching Basingstoke cold, they failed to build on this and saw Basingstoke miss chance after chance. Ryan Sutton missed a glorious chance and was closely followed by a Hallam Wilson miss from close range. Tigers were inviting pressure and put themselves in danger a couple of times with passes from their defensive zone being blocked and gifting possession to the Bison forwards but Day was quick to react and repel any danger. Basingstoke then had the best chance of the period when Danny Rose attempted a pass across goal but passed straight to George Norcliffe, unmarked, just a few feet from Day’s goal. Somehow the Bison player lifted his shot over the goal and out of play allowing Tigers to head to the break with a very narrow lead.

Tigers looked like a different team in the second period and deservedly extended their lead in the 32nd minute. Tigers had penned Basingstoke in their defensive zone and Bison couldn’t clear the puck. Jason Silverthorn and Ricky Plant threw numerous shots at goal with Mettam making a number of saves before Silverthorn’s final shot seemingly bounced to safety but Austin Mitchell-King picked up the rebound wide on the right and calmly sent the puck along the ice into the bottom left-hand corner to put Tigers two goals ahead.

Tigers continued to dominate the game in the third period and defended well, making sure that Basingstoke were unable to create much in the way of chances. As the game headed towards the final 3 minutes, Jack Watkins and Deakan Fielder led a breakaway and with Mettam expecting Watkins to pass, he left a gap for the shot and Watkins took full advantage by hammering the puck low to Mettam’s right and into the net to seal the win. Brad Day in the Tigers’ goal achieved his first shut out of the year, saving all 28 Basingstoke shots.

After the game Head Coach Tom Watkins, commented, “What a good night, I’m delighted to get the win, very pleased to do it with a shutout and of course to win on the night when we were retiring the shirt of Chuck Taylor was very fitting. I’m not going to lie, I wasn’t happy at the end of the first period, I challenged the players to execute on and off the puck to a higher standard, I expected more as defensively we were soft and our puck management was non-existent. To the credit of the players, they responded very positively.  In the second and third periods I couldn’t fault the boys, they showed great attitude, work ethic and fully deserved the shut out and win.

It was also fantastic to welcome Chuck and his family this evening, to see so many of his teammates and friends. It was a great night and I really enjoyed reliving plenty of old memories from a number of Tigers’ legends.”