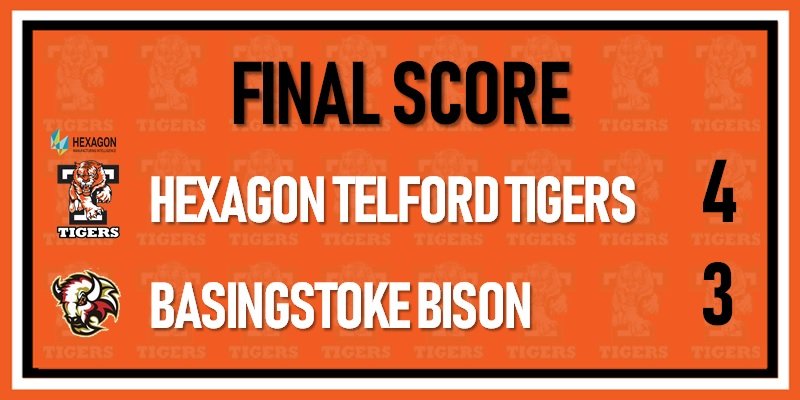 Tigers Stampede to Cup Victory.  Hexagon Telford Tigers 1 played the second of back to back games against Basingstoke Bison on Sunday night at Telford Ice Rink. Tigers chances of progression in the Autumn Cup had ended the previous night when Tigers lost 6-2 in Basingstoke. Bison were also unable to progress as, despite their win over the Tigers, Peterborough’s overtime win against Hull on Saturday night meant that they could not catch the Phantoms leaving the game in Telford a dead rubber.

Tigers fans were delighted to welcome Doug Clarkson back to Telford. With Clarkson making his first appearance at home since agreeing to come out of retirement. Jonathan Weaver, Joe Hazeldine and Jack Watkins also returned from their recent absences.

Tigers started the game brightly and opened the scoring in the 6th minute. Dan Mitchell broke clear of the Basingstoke defence and his initial shot was saved by net minder Daniel Weller-Evans. Mitchell controlled the puck from the rebound and made a perfect pass for Clarkson to fire home from close range.

Basingstoke responded well and within a minute were level. Richard Bordowski’s shot deflected off Tigers’ net minder Denis Bell’s stick and flew into the roof of the net much to Bell’s surprise. Tigers went close on a number of occasions but could not break the deadlock, leaving the score 1-1 at the end of the period.

At the start of the second period Weller-Evans mishandled the puck and almost presented Clarkson with an empty net to shoot into but he managed to scramble the puck away at the last second. Jack Watkins went close for Tigers with Weller- Evans making a terrific glove save to deny him. Basingstoke would make Tigers pay for their missed chances when Hallam Willson finished off a 3 on 1 break away in the 27th minute to give Bison the lead. Shortly after, Tigers failed to clear their defensive zone and the puck broke to Alexander Sampford who scored with a precise finish to give Bison a 3-1 lead. Tigers then had to kill off a 5 on 3 power play when Nick Oliver and Andy McKinney were both given penalties by referee Hamilton. Clarkson was also given a 10 minute misconduct penalty. Tigers avoided conceding any further goals but ended the period trailing by two goals.

In the 44th minute, Basingstoke’s Michal Klejna was given a match penalty for spearing and ejected from the game, giving Tigers a 5 minute power play. Three minutes into the power play, Tigers scored their 2nd goal. Joe Aston found Andy McKinney in space who then fired a wrist shot into the top corner of the goal.

As the game entered the final 5 minutes, Tigers pushed for the equaliser and were rewarded when Weaver burst in on goal and slid the puck between the legs of Weller-Evans into the net for the equaliser. The game was then settled in the 59th minute with Clarkson scoring a late winner, his 4th goal of the weekend. Adam Taylor brilliantly set up Clarkson to slam the puck home from the right circle and seal a comeback win.

After the game coach Tom Watkins said, “There was lots of anticipation in the stands tonight with Doug’s return but with the delay to face off due to the rink side glass breaking I thought we lost some of the atmosphere. I was pleased for the guys on the ice this evening. I thought we worked hard and showed good character coming from behind to snatch victory. We created some good chances but the puck didn’t fall for us until the third period and then we scored some timely goals. The stage was then set for the big man to secure the win with a laser of a shot into the top corner.

We are disappointed to not progress to the next round, I think this team is better than we have shown in this competition and will be very tough to beat down the stretch. “

Watkins added’ “It was great to see the under 18s recognised as National Playoff champions before the game and in front of a big crowd. They got a great reception, which was thoroughly deserved and I am very proud of those kids.”

Finally, if you are the lucky holder of “Shirt Off the Back” Ticket SB00594, let us know before Tuesday 9th October at 12:00.  You have won #93 Doug Clarkson Cup (Orange) Jersey from his first home game of the season. 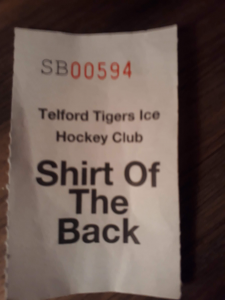