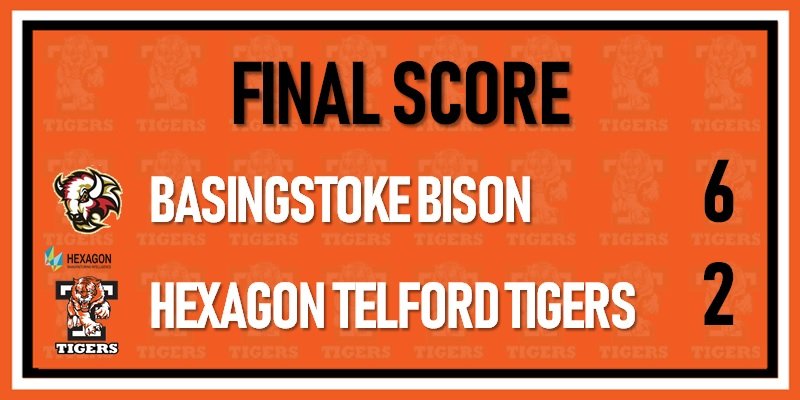 Tigers Hit for Six as Cup Hope Ends.  Hexagon Telford Tigers 1 played the first of back to back games against Basingstoke Bison at Basingstoke Arena in the Autumn Cup on Saturday night. The thrilling 5-3 win against Swindon last Sunday left Tigers needing to win both games to stand any chance of progressing to the semi final. Basingstoke were in a similar position so both teams had everything to play for.

Tigers were delighted to add the returning Doug Clarkson to the line up. Clarkson had retired at the end of the 2015/16 season and had returned home to his native Canada before reversing his decision and agreeing a contract with Telford for the 2018/19 season. The game also saw the return of Jonathan Weaver and Jack Watkins.

Basingstoke opened the scoring in the 10th minute with a power play goal from Russell Cowley after Corey Goodison had been called for tripping. Tigers then took advantage of a power play of their own with Jonathan Weaver setting up Clarkson who finished with a neat wrist shot to leave the teams level at the end of the 1st period.

The 2nd period was an even one but Basingstoke took advantage of some sloppy play by Tigers to score two quick goals in the 29th minute. Goals from Michal Klejna and Jay King were scored 13 seconds apart putting Tigers 3-1 behind going into the 3rd period.

Tigers’ cup hopes rested on them producing another come back but in the 44th minute Alex Sampford scored for Basingstoke to put the game beyond Telford.  Shortly after Clarkson scored his and Tigers’ 2nd goal, but Bison hit back with further goals from Sampford and King to seal a 6-2 win and end Tigers’ hopes of gaining a semi final place.

After the game coach Tom Watkins said, “It was a disappointing result tonight. I think they are the best team we have played against this year as they are a fast team. They played with speed, moved the puck well and can skate. At times we couldn’t control their speed off the rush. I thought we gave ourselves a chance in third after we killed off a 5 on 3 penalty and then the subsequent 5 on 4 penalty but they scored not long after that to kill the game off.

We created enough quality chances tonight but defensively we need to improve. Our play away from the puck wasn’t good enough and we paid for that.”

Hexagon Telford Tigers next play at Telford Ice Rink Sunday 7th at 18:00 in the return Autumn Cup Fixture. For details of all future fixtures, check out the Tigers fixture list and www.telfordtigers.net/tickets for ticket information.