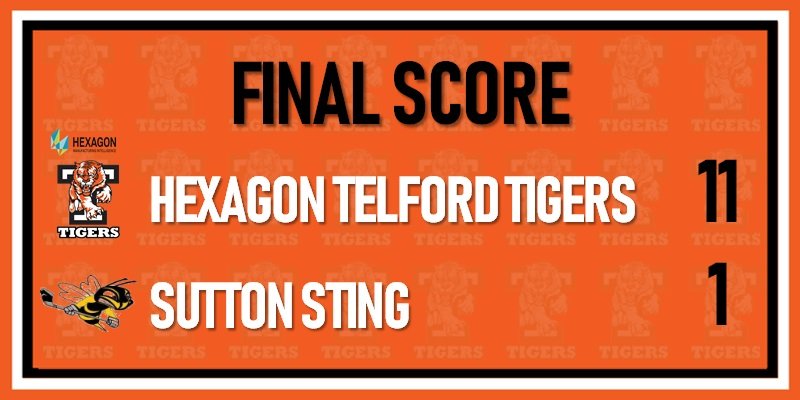 Tigers Sting Sutton. Hexagon Telford Tigers 1 faced off against Sutton Sting on Sunday night at Telford Ice Rink. Tigers came into the game having beaten local rivals Solihull Barons 9-4 the previous evening. This was the first ever game between Tigers 1 and Sting, Sutton having been promoted from the NIHL North 2 (Laidler) Division last season.

Tigers were again without Scott McKenzie, Joe Aston and Brodie Jesson but were able to add Dan Mitchell and Jed Moreland to the line up.

Tigers started the game on the front foot and went close early on when Dan Mitchell’s shot was saved by Sutton net minder Warren Gilfoyle, Jason Silverthorn made several attempts to put the rebound in from a tight angle but was prevented by a combination of the post and Gilfoyle’s leg pad.  Tigers took the lead in the 9th minute whilst on a power play after Sutton’s Jonas Fredricksson was called for tripping. Andy McKinney and Adam Taylor combined to set up Doug Clarkson who fired home with a powerful wrist shot.

Tigers then took an unnecessary penalty in the 10th minute, when Jordan Stokes was called for a blatant cross check. But it was Tigers who went on to score, whilst shorthanded.  Jonathan Weaver sent a high clearance out of the defensive zone, which was collected by Adam Taylor and back handed on goal, hitting Gilfoyle, but somehow the puck managed to get through and trickled into the net for Tigers’ second goal.  Ricky Plant then went close after being set up by Silverthorn but could not get the puck into the net. Tigers ended the period 2-0 ahead.

The second period was just 25 seconds old when Sutton’s Peter Toth took a holding penalty. On the subsequent power play, Tigers scored their third goal. McKinney and Weaver combined to set up Clarkson, who hammered the puck into the roof of the net.  Tigers scored their fourth goal in the 30th minute, Mitchell’s initial shot was saved but Silverthorn was on hand to tap the puck into the net from close range.

Tigers added a fifth and sixth goal in quick succession in the 33rd minute with the goals coming just 30 seconds apart. Both goals were scored by defenseman Nick Oliver. The first was set up from a pass behind the goal from Silverthorn and the second was a neat finish low into the net after beating a Sutton defender to the puck.

In the final minute Gilfoyle pulled off an amazing save, diving full length across his crease and knocking the puck away with his stick, from Silverthorn’s shot. But Gilfoyle conceded a seventh goal seconds later when Taylor scored his second goal of the night on the rebound from McKinney’s shot to wrap up a dominant period.

In the 45th minute, Clarkson completed his second hat trick of the weekend after being sent clear by Ricky Plant to score Tigers’ eighth goal.  Joe Colton then scored a consolation goal for Sutton. In the 47th minute, Jack Watkins scored with a powerful shot that hit Gilfoyle’s glove and went into the net. Tigers then scored two quick goals to round off the scoring. Ricky Plant scored with a close range deflection after good work by Dan Mitchell and then Silverthorn scored his second goal of the game with neat finish to seal the victory.

Tigers win wrapped up a 4 point weekend, sending them top of the league after 6 games.

After the game coach Tom Watkins said, “I thought we played a strong game tonight and I am pleased with a 4 point weekend. After the first 5 minutes we wanted to play a little more aggressive, take away time and space and play quicker on the transition.

It was good to see us make contact, recover the puck, create good support and then attack off the rush. Their net minder made a number of huge saves but we skated well, executed to our systems and ultimately had too much talent playing hard this evening.”