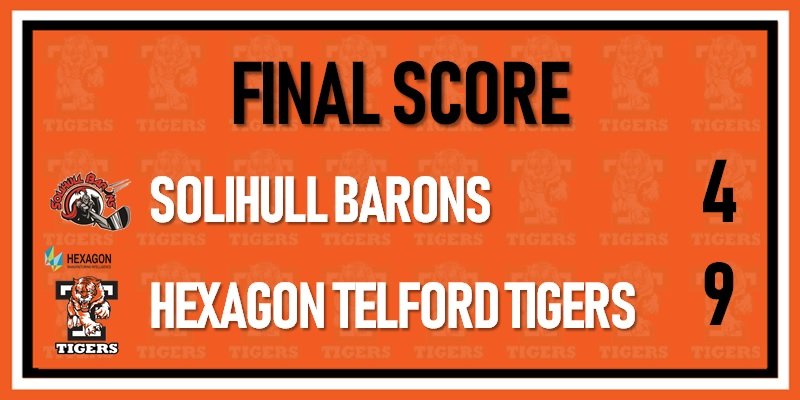 Derby Day Delight for Tigers, Hexagon Telford Tigers 1 took a short road trip to local rivals Solihull Barons on Saturday night for a Moralee Division league game. Tigers started the game in 5th place having only played five league games so far this season, due to their involvement in the Autumn Cup group stages. Tigers had only lost one league game this season – an overtime loss to last year’s champions Sheffield Steeldogs.

Tigers had lost a close fought battle in Solihull the last time the sides had met but had won the other three meetings between the teams, including the game where Solihull refused to provide a back up net minder when Dan Brittle was ejected from the game, which ended in Tigers being awarded a 3-0 walkover victory. Tigers added Charlie Hammerton and Matt Price (from the Tigers 2 team) to the line up and were without Brodie Jesson, Scott McKenzie, Dan Mitchell and Jed Moreland.

Tigers started badly and were on the penalty kill twice in the first 4 minutes of the game. Firstly, Corey Goodison was called for interference after only 27 seconds and then Andy McKinney for tripping. McKinney’s penalty would prove costly as Luke Brittle opened the scoring for Solihull  after he tapped home a rebound from Adam Brittle’s shot. Tigers responded with a power play goal of their own just 2 minutes later. Adam Taylor broke into the Solihull zone and played a perfect pass to Doug Clarkson who placed the puck between the legs of Solihull net minder Dan Brittle. But Tigers conceded again just 15 seconds after their equaliser when they failed to clear the puck from their zone, allowing Luke Brittle to wrong foot Denis Bell in the Tigers’ goal, leaving Nikolas Ottosson an open goal to shoot into.

Both Jason Silverthorn and Jack Watkins had good chances to equalise but Dan Brittle managed to block both of their efforts. Tigers finally equalised in the 18th minute. Adam Taylor again finding the unmarked Doug Clarkson in the left circle. Clarkson’s powerful shot flew past Brittle giving him no chance to save it. Brittle took exception to the players’ celebration and was called for roughing immediately after the goal, giving Tigers a late power play. Silverthorn hit the cross bar with a wrist shot within the first few seconds of the power play. As the period entered the last 30 seconds, Clarkson passed across the goal to Joe Hazeldine who fired a superb wrist shot from a tight angle into the roof of the net to give Tigers a 3-2 lead at the end of the first period.

Tigers dominated the second period and took the game away from Solihull. In the 24th minute, Andy McKinney showed terrific vision to send Taylor in on goal. Taylor shot into the top corner to extend Tigers’ lead to 4-2.  In the 29th minute, ex Tigers’ player Filip Supa was given a holding the stick penalty leading to another Tigers’ power play.  As the power play was coming to an end, Andy McKinney found Hazeldine unmarked at the far post and Hazeldine made no mistake with a precise wrist shot to give Tigers a 5-2 lead. Bell was then called upon to make a sprawling save from Supa’s breakaway chance. In the 35th minute, Tigers scored their third of the period and sixth of the game. Clarkson played a bank pass off the back boards behind the goal to McKinney who fired low into the bottom corner of the goal.  As the buzzer went for the end of the period, Solihull’s David Rogers was assessed a slashing penalty, meaning Tigers would start the third period with a further power play.

Tigers took full advantage of the extra man at the start of the third period when Hazeldine’s cross ice pass was hammered home by Clarkson, completing his hat trick with Tigers’ seventh goal. A minute later, Tigers had an eighth goal, Corey Goodison shooting through the legs of Brittle after neat passing between Silverthorn and Ricky Plant. In the 50th minute, Rogers scored for Solihull with a terrific goal after skating from his own defensive zone. He beat Bell low down with an excellent wrist shot to reduce the deficit to 8-3. Tigers then scored their ninth goal in the 54th minute with Clarkson and Matt Price combining to give Jack Watkins a tap in. Clarkson’s assist on the goal was his fifth of the night and his eighth point of the game. Solihull would have the last say on the score sheet, when Luke Brittle scored his second of the game with a wrap around goal in the 58th minute. Tigers’ victory moving them up the table to 4th place, a point behind leaders Sheffield.

Man of the match: Matt Price.

After the game coach Tom Watkins said, “We started a little slowly tonight but grew into the game and ran out comfortable winners. I was very pleased with the performances and contribution from Charlie Hammerton and Matt Price. Both guys slotted in very well and complimented their line mates well. It’s always nice to get the points off your local rivals and good to see so many Tigers’ fans travel to support the team tonight.”