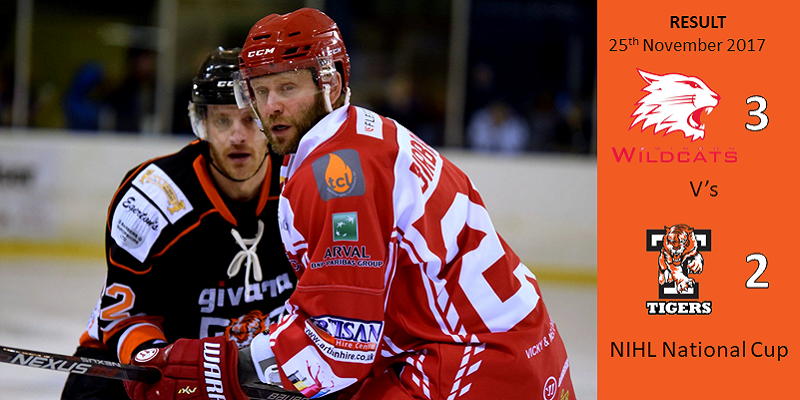 Telford Tigers 1 travelled to Wiltshire to take on the Swindon Wildcats in the NIHL National Cup on Saturday night.  Tigers had lost all 4 previous meetings with Swindon this season and were looking to end the poor run against their former EPL rivals.

The first period was an even one with Swindon making the breakthrough in the 7th minute when Jan Kostal scored to give the Wildcats the lead.  Tigers levelled in the 19th minute, Joe Miller scoring from Scott McKenzie’s pass, leaving the game 1-1 at the end of the period.

The 2nd period was similar to the 1st with both teams exchanging chances and it was Tigers who took the lead in the 38th minute with Ricky Plant netting from Jason SIlverthorn’s pass.  But, just over a minute later, Swindon were level when player coach Aaron Nell scored to leave the teams level going into the 3rd period.

The third period followed the pattern of the first 2 periods, but there was no more scoring, to leave the game tied at 2-2 and an overtime period to decide the game.

Net minder Dennis Bell made some terrific saves during the extra 5 minute period but with an agonising 11 seconds left, Nell scored his 2nd of the night to win the game.  Despite the defeat, Tigers claimed a valuable point to remain 2nd in the Group D table.

After the game coach Tom Watkins said, “ I was gutted for boys this evening to lose with 11 seconds to go. We took a period to find our feet against a strong side but that’s no surprise, we don’t play enough tight hockey games. The game tonight was very different from last weekend to this and that’s a big adjustment. We executed our plan this evening and I’m happy to pick up a point on the road.”