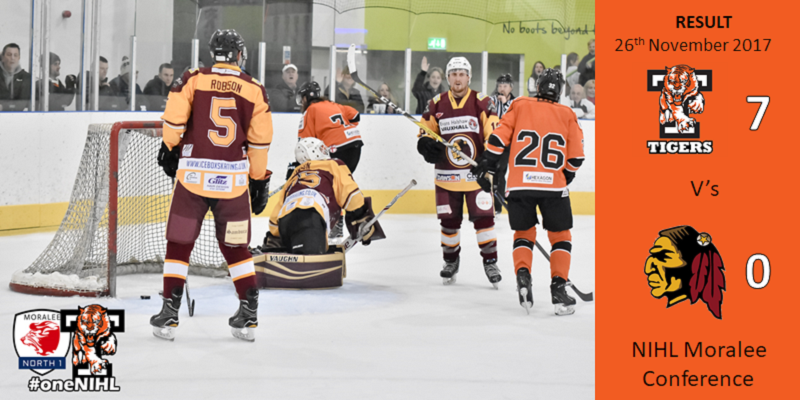 Telford Tigers 1 returned to NIHL Moralee Division action on Sunday night after losing  3-2 in overtime against Swindon on Saturday night in the National Cup. Tigers were looking to put pressure on league leaders Sheffield Steeldogs, who at the start of play, had a 3 point lead. Whitley Warriors were late arriving for the game after their coach was delayed, with the team arriving just 10 minutes before the scheduled face off time, resulting in a later face off than usual.

Not surprisingly, the Warriors players’ found it difficult to get into the game, having started without a warm up. Tigers took full advantage with a goal in the 3rd minute, just 12 seconds into a power play. Captain Jason Silverthorn firing home from the left circle after a perfect set up pass by Danny Rose.  Scott McKenzie then went close with a shot that hit the post and Adam Taylor’s goal-bound shot was blocked by a Whitley defender. Tigers continued to bombard the Whitley goal, with net minder Richie Lawson making some fantastic saves, including a terrific stick save to prevent a certain goal from Silverthorn’s shot.  Tigers scored their 2nd goal in the 16th minute when Adam Taylor sent Joe Miller clear to skate in on goal. Miller made no mistake with a wrist shot, low into the net. Tigers finished a dominant period with a 3rd goal after Danny Rose scored with a powerful blue line shot that deceived the net minder and left Tigers firmly in control of the game.

The 2nd period saw the Tigers continue to dominate and in the 29th minute gain a 2nd power play goal of the night. McKenzie tapping home from close range after good work by Miller and Taylor to give the Tigers a 4-0 lead. Two minutes later Jack Watkins added a 5th, putting the puck between the legs of Lawson after Rose’s pass sent him clear. A 6th goal was scored in the 38th minute when McKenzie scored his 2nd of the night after robbing a Whitley defender of the puck and then sending a wrist shot into the top corner.  Tigers finished the period with a 7th goal, whilst shorthanded. Ricky Plant scoring a breakaway goal.

The final period saw no further goals as Tigers saw out the game and with Sheffield losing to Hull, Tigers closed the gap at the top of the table to a single point.

Man of the match – Joe Miller.

After the game coach Tom Watkins said, “We got a good start with a very well taken power play goal, from a one timer by Jason Silverthorn and from there we were in control. We moved the puck well and created a ton of chances and if not for some great saves from both of the Whitley goalies we would have had a few more.” Watkins added, ”It was a tough situation for Whitley after a very long journey and having no warm up, then going straight into the game but for us it was important we played the right way.”