Tigers swarm to win over Bracknell. 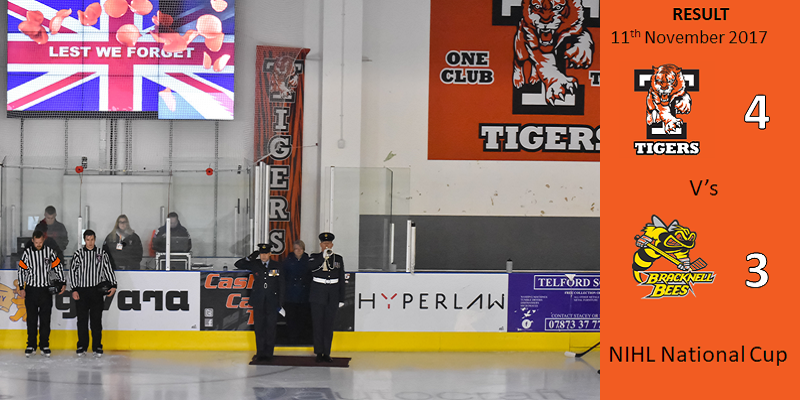 Telford Tigers 1 took on Bracknell Bees in the NIHL National Cup for the 2nd time this weekend. Having won 2-1 in overtime in Bracknell on Saturday night, Tigers faced off against the Bees at Telford Ice Rink on Sunday night.  Tigers’ win on Saturday, coupled with Basingstoke’s loss to Swindon the same night, had taken Tigers back into 2nd place in the group table.

Tigers iced new signing Adam Jones for the first time at home since his return to the club earlier this week, but Jonathan Weaver was again unavailable.

The 1st period showed that Tigers had carried over the momentum from the win the previous night, with almost constant pressure on the Bracknell net from the first whistle. Tigers made their pressure count in the 12th minute, when a great check by Jordan Stokes cleared the path for Joe Miller to fire home into the bottom corner to give them a 1-0 lead. A second goal came in the 15th minute when Warren Tait banked a pass off the boards to allow Dale White to speed in on goal. White’s powerful slap shot gave the Bracknell net minder no chance. Tigers went close again shortly after through Scott McKenzie, but couldn’t add to their 2-0 lead before the period ended.

The 2nd period continued in the same vein and with just a minute gone, Tigers scored their 3rd goal. Great passing between Joe Miller and Adam Taylor, left Taylor clear to score with a wrist shot. But despite Tigers dominance it was Bracknell who scored the next 2 goals. In the 30th minute, Alex Barker tipped a shot past net minder Dennis Bell, then just a minute later, Danny Ingoldsby’s shot was saved by Bell but the rebound fell to Steven Osman to tap home.  Tigers then had a great chance to increase the lead when Taylor’s pass sent Miller through on a breakaway but his shot was well saved by Mettam in the Bees goal. The period ended with Bracknell on the power play and they almost equalised with a shot from the blue line which Bell just managed to divert past the post to leave Tigers with a slender 3-2 lead at the end of the period.

The 3rd period was much more even, Tigers scored what proved to be the game winner in the 46th minute. Captain Jason Silverthorn pressured a Bracknell defender into turning the puck over and then skated in on goal and fired an unstoppable shot into the top left hand corner to give Tigers a 4-2 lead.  Bracknell responded 2 minutes later with a power play goal from Jan Bendik to pull within one goal.  A frantic last few minutes saw Silverthorn hit the bar and Bracknell go close to the equaliser, but despite Bracknell pulling their net minder for an extra attacker for the final minute, Tigers held on to win back to back victories over the Bees.

After the game coach Tom Watkins said,” I’m pleased with the weekend performances and results. I thought we had good balance across the 3 lines and we were able to just roll them all weekend. Tonight we moved the puck faster and were able to create some decent chances.” Watkins added, “I’d like us to add some more scoring to kill games but overall, I’m very pleased and it was nice to be behind the bench this evening, instead of playing”.

Telford Tigers 1 are next at home on Saturday 18th November against Deeside Dragons with a 5:30pm face off.