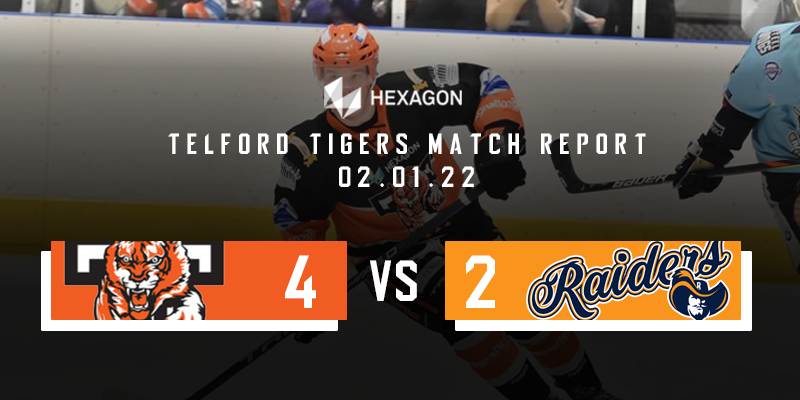 Tigers Take Top Spot. Hexagon Telford Tigers played their first home game of 2022 against Raiders on Sunday evening. Tigers came into the game off the back of a 7-2 win over Peterborough Phantoms knowing a win would see them claim the top spot in the division. Tigers had been affected by injury, suspension and illness-related absence of late and this game was no different with Andy McKinney, Jack Watkins, Ricky Plant, Thomas McKinnon, Corey Goodison and Jonathan Weaver all unavailable. Head Coach Tom Watkins missed the victory over Peterborough and was still unable to return to the bench.

The first period was a scrappy one with chances at a premium. The officials drew the ire of the Tigers’ faithful when Sam Watkins was clear on goal and was blatantly tripped as he was about to shoot but referees Williams and Truswell remained unmoved and waved play on. As the period entered the final ten seconds,  Tigers made the breakthrough. Jason Silverthorn broke into the Raiders’ defensive zone and dished the puck to Scott McKenzie who hit a fierce shot that struck Ethan James in the Raiders’ goal and dropped behind him into the net.

The second period was more of the same but Tigers had much more in the way of goal scoring chances. Fin Howells was sent clear on a breakaway but James made a good pad save. Tigers’ Danny Rose took a puck to the face and briefly had to leave the game – leaving Tigers with only three defensemen but thankfully Rose was able to return later in the period. Tigers scored a second goal midway through the period. Vladimir Luka retained possession of the puck, skated behind the Raiders’ goal and shot at James, forcing a rebound. Jack Hopkins was on hand to tap into the unguarded net and doubled the Tigers’ lead. McKenzie had two glorious chances within a minute to extend the lead but shot wide when well placed.

Tigers’ Jake Price was called for a roughing penalty early in the third period. Raiders took full advantage of the extra attacker and scored after just four seconds of the power play. Sean Barry sent a shot from the Tigers’ blue line which hit Brad Day on the shoulder and bounced behind him into the net. Tigers hit back with a third goal to seemingly put the game out of reach. Great play by Sam Watkins created a chance for Austin Mitchell-King who scored at the second attempt after James saved his first attempt at goal.  With the game reaching the last four minutes, the Raiders had another power-play chance after Hopkins was called for high sticking. Once again, the Raiders’ power-play unit scored, Aaron Connolly, scrambling the puck home after Dan Scott’s initial shot was saved. With time running out, a controversial call was made by the officials with Raiders’ bench calling for icing by Tigers. The call was not made and the game continued. Tigers won possession of the puck, Luka found Hopkins breaking in on goal and the young Tigers’ forward hit a stunning shot into the top left-hand corner of the goal to seal victory for Telford. The win gives the club a four-point weekend, six wins in a row and takes Tigers to the top of the league.

After the game Assistant Coach Karl Creamer, commented, “It has been a great four-point weekend with a depleted team and key players missing, which takes us to the top of the league. It was a solid effort by the team, we work hard to be competitive and are committed every night to play the right way. We have had a good run of back to back wins taking us to the top of the league and we intend to stay there.”