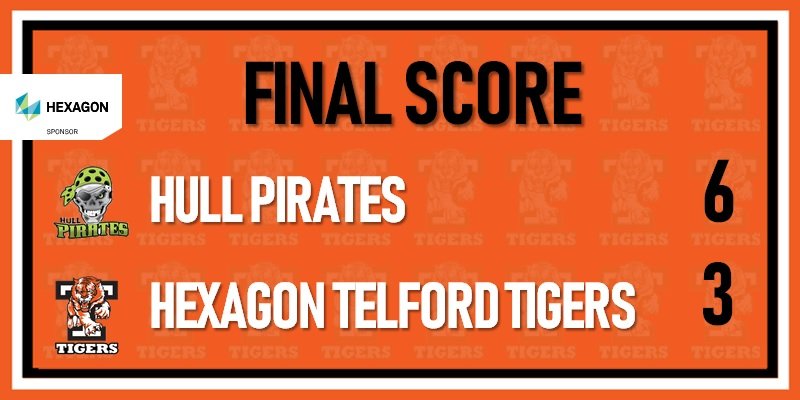 Tigers’ Title Bid Ends After Hull Defeat. Hexagon Telford Tigers 1 faced off against Hull Pirates at Hull Arena on Saturday night. Tigers knew that nothing but a win would keep alive their hopes of winning the NIHL Moralee Division title. Prior to the game coach Tom Watkins commented, “From the point of view of the fans and the league, it’s going to be a very exciting finish. A lot of hard work and effort have gone into getting us where we are now and we want to finish the job. But I’m looking forward to it and the guys are too. It’s exciting to be part of such a close finish. I think the pressure is on Hull with them having a very good roster and being at home. But I like our record there and we won on our last visit. We have been in similar situations to this before. All we can do is win our games and then see what happens.”

Watkins also commented on the team approach since losing star forward Doug Clarkson a few weeks ago.“We have played a simple and more direct system, over the last three or four weeks we have been much improved defensively.The fact that we have lost two key attacking players means we can’t concede four or five goals a game. If we do, we won’t win.”

Tigers were still without the suspended Andy McKinney but added Jed Moreland, Dan Mitchell and Fin Howells to the line up. Tigers started with Sam Gospel in goal and Hull started Ashley Smith in goal for the Pirates.

A breathless first period almost started disastrously for Tigers when they nearly went behind with the opening attack of the game when Hull broke through on Tigers’ goal. Lee Bonner’s shot was saved by Gospel and hit the top of the net, some Hull fans celebrated and the goal horn sounded but the puck had clearly gone on top of the goal rather than in. Tigers were penned into their own zone for the first five minutes of the game with far too many defensive turnovers contributing to Hull’s constant pressure. Gospel was called on several times to keep Hull out. As the game reached the ten minute mark, Tigers were starting to get a grip of the game but were caught out when Scott McKenzie gave away a needless tripping penalty in the Hull defensive zone. Tigers were made to pay when James Archer set up Bonner to fire a wrist shot past Gospel for the game’s opening goal. Gospel was again called on to keep Tigers in the game when he pulled off a stunning glove save from Lubomir Korhon when it looked like a certain goal for Hull. Bonner then rang a shot off the cross bar. Tigers broke away with Joe Hazeldine finding McKenzie who beat a Hull defender with some superb stick handling and placed a wrist shot into the bottom corner to equalise. As the period entered the final minute, Hull’s Bobby Chamberlain slashed Gospel after he had made another save and referee Good called Chamberlain for the penalty. Tigers took just seven seconds to make the extra man advantage pay. Corey Goodison’s shot rebounded off Smith’s pads perfectly into the path of Jason Silverthorn who applied the finish to put Tigers ahead.

Tigers started the second period much better than the first period and had Hull on the back foot. Hull were lucky to escape another penalty when Chamberlain blatantly cross checked Gospel just a few feet away from referee Good, but he ignored the infraction. Tigers added a third goal in the 28th minute when Jack Watkins collected a rebound from Brodie Jesson’s shot. Watkins was almost level with the goal line at the side of the goal and somehow managed to elevate the puck into the roof of the net. Gospel was called on again to make a big save when Hull’s Matty Davies was sent in on goal but Gospel beat him with a pad save and cleared the rebound. Gospel could do nothing moments later, however, when Kevin Phillips’ shot from the blue line was tipped by Davies into the net to reduce the deficit to just one goal. Hull were then given a golden chance to equalise when Goodison was adjudged to have committed a late hit, giving Hull a power play. Tigers lost the initial face off and gave Sonny Karlsson far too much time, Karlsson hammered the puck into the top corner of the goal to level the game.

As the third period started both teams knew the importance of the next goal in the contest and sadly for Telford it would be Hull who scored it. A rare mistake by Jonathan Weaver behind the Tigers’ net allowed James Chilcott to find James Archer and score from close range. Tigers went further behind when they were caught with too many men on the ice and Hull were given a power play. Jason Hewitt scored with a wrist shot past Gospel to take Hull two goals clear. Tigers were pushing to get back into the game and were caught out when Chilcott and Karlsson combined to set up Chamberlain for Hull’s sixth goal. Tigers’ title bid was over and Hull now play Sheffield to decide the league winner.

Man of the match: Sam Gospel.

After the game coach Watkins commented, “ I must acknowledge and thank our travelling fans this evening. They travelled in large numbers and really got behind the team, for which we are very grateful. There’s been a lot of excitement over the last few weeks about the run in and it’s great for the league that it goes to wire, but sadly we didn’t have what it takes today. No complaints from me, we were beaten by the better team and good luck to them tomorrow. The guys worked tremendously hard and really sacrificed their bodies for the team.”

Watkins commented on the man of the match performance of the Tigers’ net minder,
“Sam Gospel kept us in it at times and made a string of fine saves all night. He robbed Lubo (Korhon) with that amazing save going post to post in the first period when probably the whole rink thought he had scored.”