Tigers Victors After Barons Bow Out 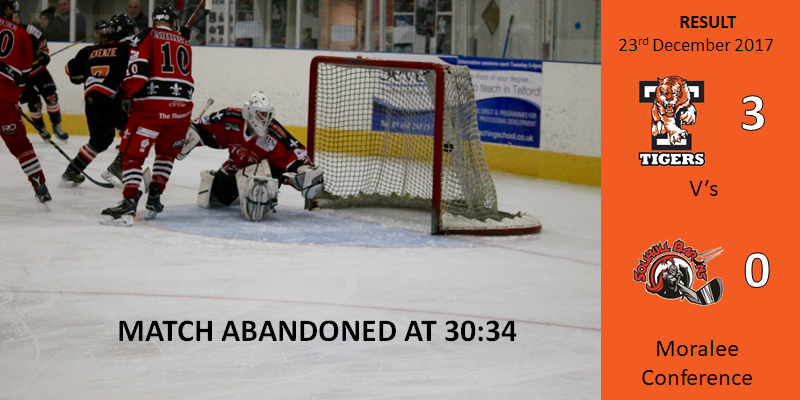 Telford Tigers 1 took on local rivals Solihull Barons in the NIHL Moralee Division on Saturday night at Telford Ice Rink. Tigers had won the last 4 games in a row and had beaten Solihull in both previous games this season. With league leaders Sheffield Steeldogs not playing this weekend, it was the perfect opportunity to close the gap at the top of the table.

The 1st period was a feisty one with both teams finishing their checks and no love lost between the 2 teams. It was Tigers who struck first in the 8th minute when Dale White’s powerful shot was saved by Solihull net minder Daniel Brittle but Scott McKenzie followed up to score the opening goal of the contest.  Tigers then went close whilst Solihull were on a power play, Adam Taylor making Brittle pull off a good save. In the 12th minute, Tigers extended their lead through Captain Jason Silverthorn whilst on a power play. McKenzie provided a perfect pass from behind the goal to allow Silverthorn to slam the puck home from close range.  Joe Miller and Solihull’s David Rogers dropped the gloves after Miller was cross checked by Rogers with a clear win for Miller.  Jordan Stokes then hit the bar with a shot after great work by Warren Tait left him a clear shot on goal from the left circle. The period ended with Brittle receiving a 10 minute misconduct penalty and Tigers deservedly 2-0 ahead.

The 2nd period was only 17 seconds old when Tigers scored their 3rd goal. Ricky Plant scored with a one timer after being set up by Silverthorn. Shortly after Miller dropped the gloves again this time with Stephen Heape. More penalties followed with Adam Jones getting called for boarding and Solihull’s Josh Bruce for roughing.  Tigers’ net minder Dennis Bell made 2 terrific saves to keep Solihull out before the incident that sparked the game’s conclusion. In the 31st minute Adam Taylor got called for a slashing penalty on net minder Brittle who took exception to the slash. In the ensuing melee, Taylor got pushed to the ice and Brittle was given a 2nd misconduct penalty and ejected from the game. As Solihull did not have a back up net minder, they were given 10 minutes to dress a replacement but Solihull chose not to and the game was abandoned, much to the crowd’s displeasure.  As more than half of the game had been played the result will stand, giving Tigers the 2 points and closing the gap at the top of the table to a single point.

After the game coach Tom Watkins said, “I have never been involved in a game where this has happened. I was of the understanding that if you travel without a back up net minder, you have to nominate a player to the officials who would take on that role and then we would avoid the situation that has occurred this evening.”

Watkins added, “To confirm for our fans, the 3-0 result stands and the game will not be replayed.  This was a situation which was completely out of our control. I’d like to thank the fans, volunteers, players and Telford Ice Rink staff for their understanding during a few frantic minutes. I hope those fans that took the opportunity of a free skate with the Tigers’ players enjoyed themselves and thank you for Telford Ice Rink staff for making the skate with players possible in such a short space of time.”