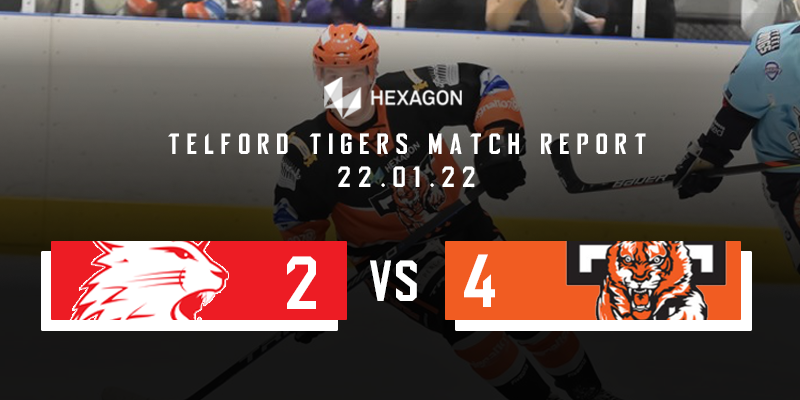 Tigers’ Wild Fightback. Hexagon Telford Tigers travelled to Swindon to take on title rivals and league leaders Swindon Wildcats in the first of back-to-back games between the top two teams in the division.  Tigers had lost top spot the previous weekend after consecutive defeats and were looking to get back to winning ways.

Tigers were able to call on an almost full-strength roster with the return of Jason Silverthorn and Ricky Plant who made a welcome return from injury. New signing Bayley Harewood was able to make his debut and the only players missing were Jack Watkins and Corey Goodison.

Tigers made a poor start to the game and were facing a Swindon power play within the opening minute of the contest. Thomas McKinnon was awarded a very harsh interference penalty and initially, Tigers defended well, even forcing a good save from Renny Marr in Swindon’s goal after Andy McKinney had a short-handed chance. With seconds of the power play left, Tomas Malaskinski’s shot was saved by Brad Day in the Tigers’ goal but Edgars Bebris poked the rebound through Day’s legs to open the scoring. Tigers barely troubled Marr’s goal in the first period with the team struggling to create anything of note. Swindon doubled their lead midway through the period with a goal from Oli Endicott, the Swindon forward scoring at the third attempt after saves from Day. A disappointing period ended with Tigers on the offensive but unable to get on the scoresheet.

The second period was much better for Telford and they created a number of chances but could not find the finish. Joe Aston, Vladimir Luka and Jonathan Weaver all went close but shot straight at Marr. Sam Watkins went even closer when his rising wrist shot struck the post with Marr beaten. Tigers had the better of the period but could not get any breaks in front of the goal.

Tigers had a glorious chance at the start of the third period with Luka finding the unmarked Scott McKenzie in front of the goal but Marr made a superb glove save to deny McKenzie. With ten minutes left of the contest, it looked like no matter what Tigers threw at the Swindon goal they were not going to beat Marr.  The breakthrough finally arrived from an unusual source. Danny Rose smashed a shot from the Swindon blue line which beat Marr low down after Plant had screened him. The goal gave Tigers all the momentum in the game and they equalised within forty seconds!

Plant skated towards the net with the puck and drew two defenders to him. He then sent the puck backwards towards the slot where Silverthorn was waiting to tap home. With Swindon reeling, Tigers took full advantage and scored the third goal. Silverthorn set up Harewood with a brilliant pass to allow the Tigers’ forward to hit a superb wrist shot into the top corner of the net for a debut goal. With Tigers having all the attacking play, they almost added a fourth goal straight away, with Silverthorn’s wrap-around shot missing by inches.

Swindon were given a chance to draw level three minutes from the end when McKinnon was called for slashing. A minute into the power play, Swindon called a time out and pulled Marr from the goal for an extra attacker. With Tigers’ defenders throwing themselves in front of every puck shot at goal, the Wildcats’ power-play unit cycled the puck across the ice where Malaskinski was waiting. With Day on the other side of the goal, the Swindon forward shot towards the gaping Tigers’ goal but missed and sent the puck around the boards and out of the Tigers’ defensive zone, landing perfectly for McKinnon who had just left the penalty box to take control and send the puck into the empty Swindon goal for the Tigers’ fourth goal and seal a remarkable victory.

After the game Head Coach Tom Watkins, commented, “It was a very close game, two good teams with a lot to play for. We didn’t get a good start, we were very scrappy, had poor execution and didn’t do the basics well. However, at 2-0 down we didn’t panic, Brad (Day) made some big saves and we missed some good chances but stayed calm, didn’t panic or chase the game in the wrong places and I think we showed good experience to trust the process. I think we had more gas in the third period, we always felt we weren’t out of the game and if we got one goal we could capitalise on that momentum. Both teams competed hard and we will be back at it again for the next game.”