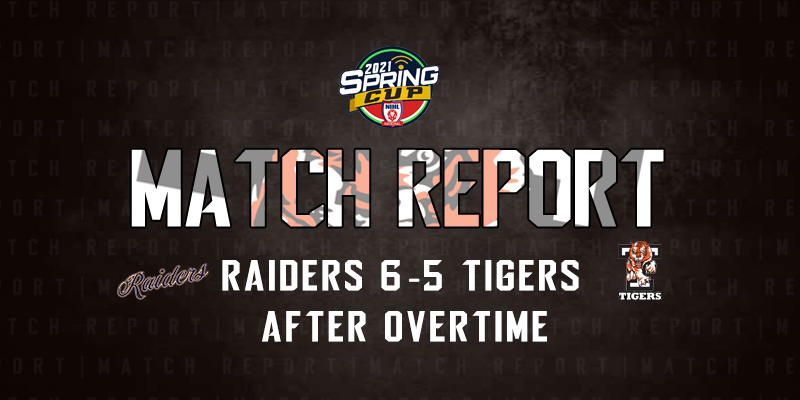 Watkins Disappointed with Overtime Loss. Hexagon Telford Tigers played their final game of the Spring Cup against Raiders in Romford on Saturday evening. Tigers came into the game with second place already secured and an unbeaten record against Raiders in their home rink.

Tigers made the perfect start to the game with a goal in the second minute. Kieran Brown’s shot was deflected towards James and the rebound landed perfectly for Robert Lachowicz to fire home. Within two minutes, Tigers had doubled their lead. Ricky Plant passed from behind the Raiders’ goal to the unmarked Scott McKenzie who beat James with a well-placed wrist shot. Raiders fought back and the rest of the period was even but Tigers’ early goals gave them the advantage.

Early in the second period, both teams hit the post – Tommy Huggett for Raiders and Brown for Tigers.  The next goal in the contest was scored by Tigers and it was a well-worked individual effort by Ross Venus. The Tigers’ forward skated in on goal and lifted a backhanded shot over James into the roof of the net. With Tigers firmly in control of the game, Raiders hit back and scored two quick goals to get back into the contest. Ashley Jackson and Ben Solder scoring less than a minute apart to send Tigers reeling.

With both teams getting power-play chances and not taking them, it was Tigers who scored their fourth goal just as a power play had ended. Venus’ shot was deflected over James by Jason Silverthorn from close range, sending Tigers into the break 4-2 ahead.

The third period exploded into life in the final five minutes. Up to that point Tigers had been happy to maintain possession and, with Raiders unable to create any clear cut chances, it seemed the game was petering out. But Raiders pulled a goal back when Dan Scott’s blue line shot hit a defender and fell for Glen Billing to beat Day. Just over a minute later, Tigers’ two-goal lead was restored when a mix up in the Raiders defence left Fin Howells free in front of goal, allowing him to score from close range. Raiders fought back within a minute and pulled to within a goal of the lead when Tigers’ defence didn’t clear the puck from their zone and Juraj Huska shot in off the bar to score. Raiders would then level the game with just fifty seconds left. A good passing move ended with Glenn Billing scoring from almost on the goal line, giving Day no chance.

A needless tripping penalty for Plant in the dying seconds of regulation time cost Tigers dear, meaning Raiders would start overtime on the power play. The extra man proved crucial as Raiders scored a minute into the extra period, Solder scoring his second goal of the game to win the match for Raiders, sending Tigers to defeat.

Man of the match: Robert Lachowicz.

After the game Head Coach, Tom Watkins, commented, “It was not how we wanted to end the Spring Cup but if you don’t play smart, you get punished. I would expect to see a game out with a two-goal cushion and with only 5 minutes to play but disappointingly, we threw the game away.  Credit to the Raiders, they turned the game on its head and took full advantage of our sloppy finish. This one leaves a sour taste as you want to end on a high, but overall it’s meant a lot to be able to get back to work, be back in the rink and around the game again with some sort of a routine.

All the players, staff and volunteers have done a tremendous job managing the situation and ensuring we comply with all the protocols, for which we have all been grateful for the opportunity.

The players have all been very professional in their approach, adapting to new teammates and surroundings very quickly with us playing some very exciting games which I’m sure have been fun to watch.”

Watkins also stated, “I want to say a massive thank you to our media streaming team who have worked tirelessly to give people the opportunity to watch hockey again. It hasn’t been easy and has taken a huge amount of time behind the scenes to set up. Again, we are very grateful for their time and expertise in putting together a very slick production.  I also want to wish all the best to those players who are moving on to play in the Elite series.”