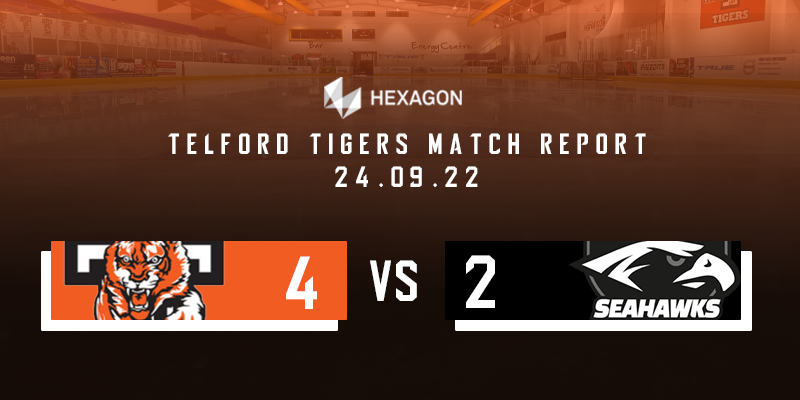 Watkins Wants More From Tigers. Hexagon Telford Tigers returned to home ice to take on the newly formed Hull Seahawks in the first of back to back games against Hull this weekend.

Telford had won their first home game of the season last weekend, against Bristol Pitbulls, whilst Hull had a sobering weekend after taking two heavy defeats against Swindon Wildcats and Milton Keynes Lightning. Hull missing both import forwards and player coach Matty Davies were also without experienced players Declan Balmer and Sam Towner. The Seahawks had struggled to compete with their opponents the previous weekend losing both games without scoring a goal and conceding twenty one goals.

Tigers were still missing key players of their own with Jonathan Weaver and Deakan Fielder unavailable, but Jason Silverthorn was able to return.

Telford made a bright start to the game and went close early on with Scott McKenzie’s tipped shot being well saved by Curtis Warburton in the Hull goal. Despite Telford having all the possession in the opening five minutes of the game, it would be Hull that opened the scoring. A breakdown in play in the Tigers’ defensive zone saw the puck break to the unmarked Cameron Hamill who lifted the puck in off the bar and behind Brad Day to give the away side the lead.

Tigers spent the rest of the period on the attack, with Bayley Harewood the brightest of the Tigers forwards, but despite some good chances could not get past Warburton.

Tigers continued their dominance in possession at the start of the second period but fell even further behind when Nathan Salem combined with James Archer to allow Archer to send a shot low along the ice past Day into the bottom right hand corner of the goal.

Tigers finally got on the scoreboard midway through the period. Rhodes Mitchell-King hit a slap shot from the blue line that flew straight into the corner of the goal, with Warburton screened. The goal was just the fillip Telford needed and they were soon level. With Hull’s James Chilcott in the penalty box for hooking, Telford’s power play worked an opening, McKenzie’s shot was saved and Jason Silverthorn was first to the rebound to fire Tigers level.

Shortly after, Tigers had their first lead of the night when McKenzie skated to the net and sent the puck in front for Vladimir Luka to smash past Warburton. With Hull tiring, the relentless pressure started to pay as Tigers added a fourth goal.  Corey Goodison sent a shot in on goal that appeared to have been tipped by a Tigers’ forward but the goal was awarded to Goodison, giving Telford a two goal cushion at the end of the second period.

Tigers controlled much of the third period but could not add to their total. Hull pushed for a goal to get back into the game but Brad Day made a number of crucial saves. Warburton was pulled from the goal for the final minute of the game to add an extra attacker but Telford defended well and secured their second home win of the season.

Man of the Match: Lucas Price.

After the game Head Coach Tom Watkins, commented, “That was not our best performance at all but we got the two points. We only played at the level of energy and intensity I want to see for about 10 minutes in the second period, where we scored four unanswered goals. With only a two goal cushion throughout the third period I was nervous as you never know what’s going to happen. We should have put the game out of reach. We have to find that killer instinct.”