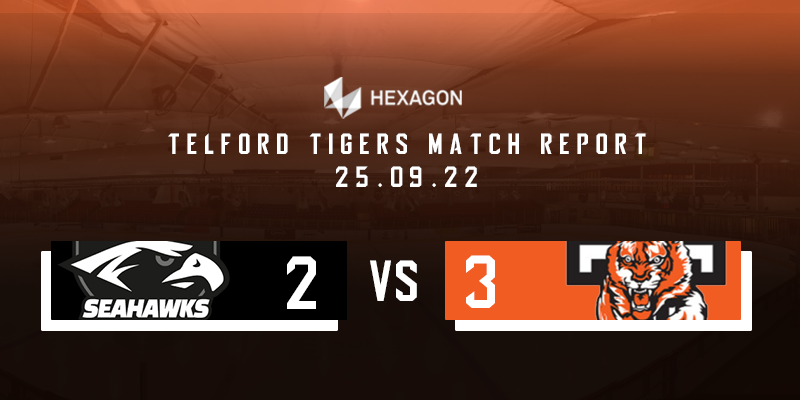 Four Point Weekend For Tigers. Hexagon Telford Tigers travelled to Hull for the second of back to back games against the Seahawks. Tigers had won the reverse fixture in Telford the previous evening.

The first period saw end to end action with Tigers having the more shots on goal. Jordan McLaughlin in the Hull goal was the busier of the two netminders, including a terrific close range glove save from a Bayley Harewood shot. The period ended goalless.

Tigers had a couple of power plays early in the second period but could not make the extra attacker count. Harewood continued to be the most dangerous Tigers forward and he hit the crossbar with a rising wrist shot.

Telford finally broke the deadlock midway through the period with a well worked goal. Scott McKenzie found space in the Hull defensive zone, beat a defender and sent a perfect pass into the slot where Vladimir Luka hit a low shot past McLaughlin to give the Shropshire side the lead.

Hull equalised three minutes into the third period with a slap shot goal from Nathan Salem that was past Tigers’ netminder Brad Day before he could move. Worse followed as an ill advised pass across the blue line by Corey Goodison was intercepted by Hull’s Cameron Hamill, who skated in on goal and shot past Day to give Hull the lead.

Telford hit back straight away with their two most experienced players combining to get the equaliser. Jason Silverthorn took the puck towards goal, passed to Ricky Plant allowing the Tigers’ forward to beat his man and slide the puck past McLaughlin to draw the sides level.

With both teams pushing for the next goal, it was Tigers that scored what proved to be the winner. After a defensive scramble at the side of the net, the puck landed in front of goal where Fin Howells was perfectly positioned to shoot first time past McLaughlin to put Telford in front.

Despite some late pressure from Hull when they had pulled McLaughlin from the goal to add an extra attacker, Tigers held on for their third consecutive win and a four point weekend.

After the game Head Coach Tom Watkins, commented, “It was another frustrating performance where we dominated possession, end zone time, shots on goal but failed to create quality scoring chances or were clinical enough to take advantage of the opportunities we did create. Fundamentally we didn’t execute in key areas in key moments. Credit to Matty’s team they were very determined, disciplined in their work, they battled extremely hard, made it extremely difficult for us to find space in the offensive zone and limited us to a lot of play on the perimeter. “