Zac Oliver will drop the puck 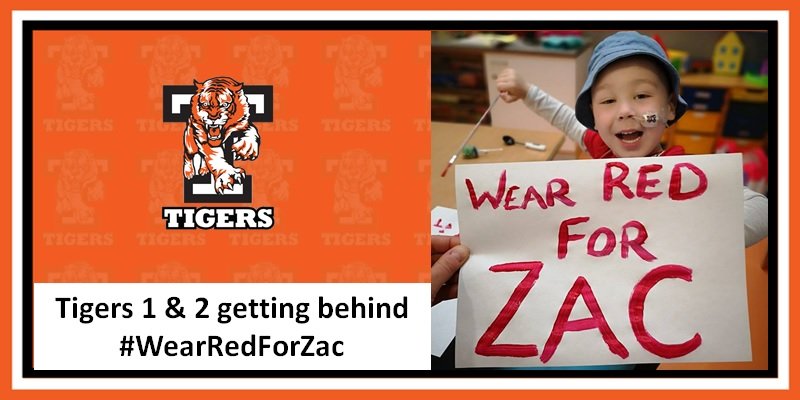 Local 4 year old youngster Zac Oliver will drop the puck in a ceremonial puck drop for Telford Tigers 1 in their home game against Swindon Wildcats on Sunday 30th September, facing off at 18:00.

Zac has a very rare form of childhood leukaemia, called Near Haploid, and needs to travel to the US for treatment, unavailable on the NHS.

His family and friends need to raise £500,000 to get to Philadelphia for the CAR-T therapy, and they are organising a #WearRedForZac day to take place on September 28th.

Zachariah Oliver was diagnosed with Near Haploid in May 2018. After 3 months of treatment his results are not what the doctors had hoped. The chemo hasn’t killed the cancer, so what’s the alternative.

The UK panel of doctors have stated that Zac does not meet the criteria in the UK for the CAR-T trail and that he must relapse before he is eligible. All research states that children with Zac’s diagnosis and positive MRD mostly die due to relapse. The family know he will relapse because of his poor cytogenetics & are not prepared to watch him die. The family will not wait for his little body to become weak from the chemotherapy before giving their little boy what could be life saving treatment.

Tigers General Manager Tom Watkins said,  “Somethings in life are far more important that ice hockey, and I’m sure both the Tigers and Wildcats fans will welcome 4 year old Zac Oliver and his family to the game. Zac from Broseley is fighting an extremely rare and aggressive form of Leukaemia and requires essential life saving treatment. You may have seen the #WearRedForZac campaign, which is a number of events being held to raise £500,000 for his treatment. We would kindly ask you all to support Zac and his family to reach the target to allow him to have the treatment he needs.”

People are being asked to wear red and donate to the campaign, as well as posting a picture of themselves on social media with the hashtag #WearRedForZac

On Sunday Zac’s family are being given the chance to meet the players before the game, and afterwards have team photos.

Additionally on Saturday and Sunday, Tigers Volunteers will be doing a bucket collection during the games to help raise funds towards Zac’s treatment. We are urging supporters to donate as much as they can towards helping Zac & his family that will enable him to travel to Philadelphia. Tigers will also be raffling of a signed Tigers flag with all proceeds going Zac, so please make sure you get your raffle tickets.