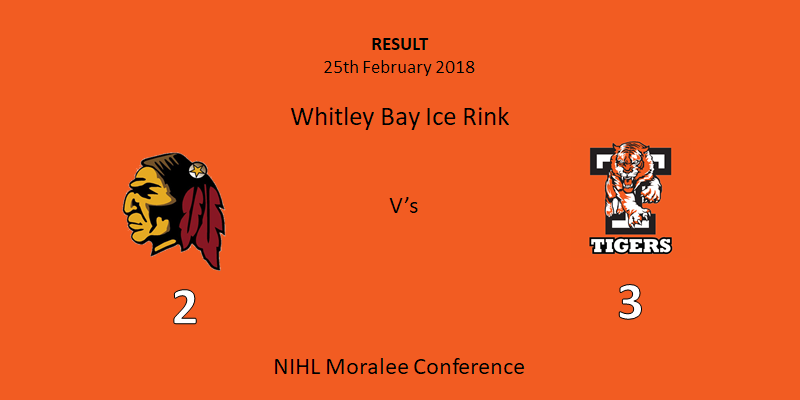 Telford Tigers 1 took a long road trip to Whitley Bay to face the Warriors on Sunday night. Tigers had won the previous night against Hull to keep their faint title hopes alive.

Tigers were without a number of players through injury, with Dale White, Jordan Stokes, Brodie Jesson and Jack Watkins all not icing.

Tigers edged a hard fought 1st period but neither team could get on the scoresheet.

Tigers finally broke the deadlock when Whitley’s Shaun Kippin took an interference penalty and gave Tigers a power play. Just four seconds into the power play, Warren Tait scored from Jonathan Weaver’s pass. Tigers then scored their second goal in the 30th minute through Ricky Plant. Just as it looked like Tigers would take full control of the game, Whitley hit back with two quick goals of their own. In the 32nd minute, Phil Edgar scored to halve the deficit. Shortly after, Jed Moreland was given a boarding penalty. On the subsequent power play, Whitley player coach David Longstaff scored to tie the game and leave the contest finally balanced going into the 3rd period.

Both teams battled hard for the points, Weaver missed a great chance when one on one with Whitley’s net minder Mark Turnbull. Tigers then had two power play opportunities but could not score. Just as it looked like the game was headed to overtime, captain Jason Silverthorn worked his way in front of the goal and beat Turnbull with a neat move and wrist shot to win the game in the 59th minute.

After the game coach Tom Watkins said, “ We got the two points which is huge at this stage. It was a really exciting game with edge of the seat stuff and I gave a huge sigh of relief when Silverthorn got the winner.”

Watkins added, “We had a strong start to the second period taking a 2-0 lead but Whitley battled back. We created some good opportunities and eventually we got our reward. “