Sutton are stung in penalty shoot-out! 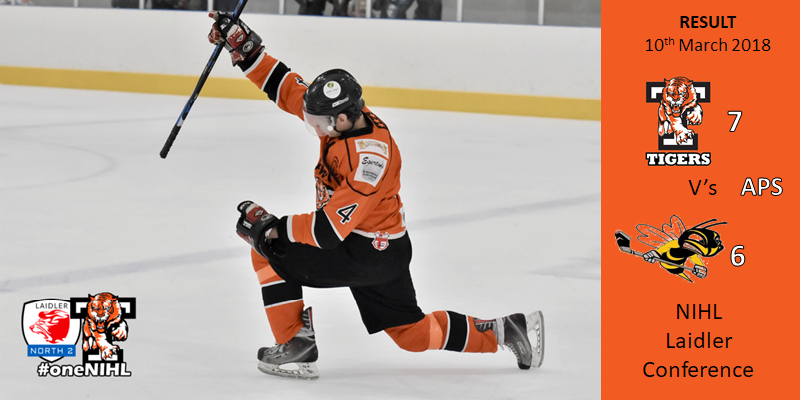 Tigers 2 were fierce and ready to go this Saturday following a narrow defeat last weekend against Widnes Wild. This time it was league toppers Sutton Sting who were the guests at Telford Ice Rink.

The puck dropped for the first period and it seemed that it was Sting who were dominating the ice at first. Within the first two minutes of the game, Tigers’ d-man Hustwick was given a two-minute tripping penalty. The pressure was on for Tigers but they held out well making it difficult for Sutton Sting to score on their powerplay! Less than five minutes later it was a Tigers powerplay with #18 Josh Hustwick leading the way with a powerplay goal assisted by player coach Callum Bowley at 6:07.

Now it was Sutton’s turn to feel the pressure and another penalty for them resulted in them being two goals down from a powerplay goal scored by #4 Karol Jets at 8:17. A two-minute slashing penalty for #66 Price left Tigers a man down yet again, Sutton took advantage and scored their first goal at 10:27; followed by their second goal less than 30 seconds later. Tigers started to lose their rhythm and Sutton quickly snapped up the lead with their third goal at 11:33.

Exactly two minutes later it was #11 Brandon Anderton who started to pull back the game scoring a Birthday goal at 13:33, assisted by #91 Charlie Hammerton. With less than five minutes to go in the first period, both teams were battling to get in another goal before the buzzer. It was Sting who struck first with their fourth goal of the game a 18:49 followed by another goal at 19:18! The period ended in Sutton’s favour… Tigers 3, Sting 5.

The second period quickly went underway and Tigers 2 started to make their mark! Quick touch passes from #4 Karol Jets and #40 Ben Washburn successfully set up the perfect goal opportunity for Callum Bowley. The puck found the back of Sting’s net at 24:58, giving Tigers their fourth goal! Sting weren’t backing down yet and at 33:02 they managed to sneak the puck past Tigers netminder Zack Brown, putting them back into a two-goal lead. This didn’t unsettle the Tigers yet and they responded with their fifth goal of the game scored by #11 Anderton and assisted by #6 Will Reed and #49 Dan Thomason at 38:49. The second period ended Tigers 5, Sting 6.

With one final period to go, both teams came back onto the ice focused and ready to go. There was physical play from both sides and a lot of end to end play. Tactical play from the Tigers left Sutton in a daze when the equalising goal was scored by #27 Callum Griffin at 44:31! Less than ten minutes to go and Tigers’ Bowley calls a time out in hope that they can score a game winning goal. Both teams pressed on but neither could score a goal… Sting stung themselves with a bench penalty for too many men at 59:17 but Tigers still didn’t manage to score in the remaining few seconds. The buzzer went for regulation time with the score line sitting at 6 goals apiece… it was time for overtime!

Sting started with a man down due to their bench penalty and decided to take their time out at 61:58 following penalties being given to Tigers’ Hammerton and Sutton’s Jones. It was 3 on 3 for the next two minutes and still neither team managed to score. The buzzer went again after 5 minutes of overtime play and with no more goals being scored it only meant one thing… time for penalties!

It was Sting’s Lascek who was up first… a good attempt but Brown saves! First up for Tigers was player coach Callum Bowley… scores! It was Tigers 1, Sting 0. With only two more attempts left each the game became even more tense! Next up for Sutton was Johnson… some fancy play unfortunately didn’t work for him and he missed! It was all down to Tigers Captain Karol Jets and a super powerful shot straight through the keeper’s pads gave Tigers their winning goal! The Tigers bench roached as did all the Tigers fans as the boys in orange become one step closer in making the Laidler Conference play-offs!