Clarkson Signs Off With a Hat Trick 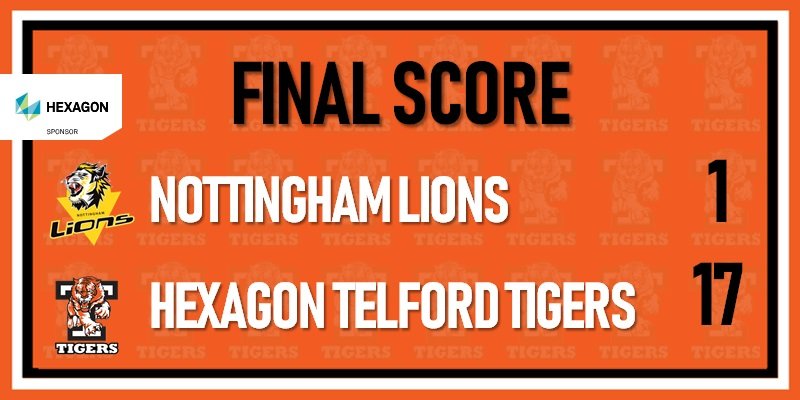 Clarkson Signs Off With a Hat Trick.  Hexagon Telford Tigers 1 travelled to Nottingham Arena on Sunday night to take on bottom of the table Nottingham Lions. Tigers had won 10-2 the previous evening against Blackburn Hawks and sat in second place in the league.

The game was the final appearance in a Tigers shirt for fan favourite Doug Clarkson as he heads home to Canada to pursue his career as a firefighter.

Telford started with Sam Gospel in goal, with Nottingham starting Miles Finney. Tigers were able to add a number of U18 players including Alex Blake and Fin Howells to the line up as they had played an U18 game at the arena shortly before the senior team.

Tigers scored the opening goal of the game with their first attack after just twelve seconds of the game, with the goal coming from Jason Silverthorn. Tigers dominated the period and it was a surprise that next goal didn’t arrive until the 14th minute with Adam Taylor applying the finish to a Joe Hazeldine pass. Tigers finished off the period with further goals from Brodie Jesson and Jack Watkins.

Tigers scored at will in the second period with Scott McKenzie, Corey Goodison and Doug Clarkson scoring in the first seven minutes to put Tigers 7-0 ahead. Ricky Plant was awarded a tripping penalty in the 30th minute, but being a player down for two minutes didn’t stop Tigers, who scored a remarkable three goals whilst shorthanded. Silverthorn, McKenzie and Clarkson scoring to give Tigers a 10-0 lead. Coach Tom Watkins gave ice time to some of the younger and less experienced players as the period ended and this saw first goals at senior level for both Howells and Blake, taking Tigers lead to 12-0.

The third period saw Tigers score five more times, with goals from; Warren Tait, Danny Rose, Jesson, a second goal from Howells and Clarkson completing his hat trick. Gospel’s shut out bid was ruined with just three minutes of the game left as Thomas Palmer scored the only goal of the game for Nottingham.

Tigers’ win maintains second place in the league, a point behind leaders Hull with a game in hand. Tigers’ focus now turns to the NIHL North Cup final double header with Sheffield Steeldogs next Friday and Saturday.

After the game coach Tom Watkins commented, “It was a one sided game from start to finish which meant we rested/withdrew some players from the game as the night went on.
It was good to see both Alex (Blake) and Fin (Howells) grab their first goals for the team and also pick up a couple of assists.”