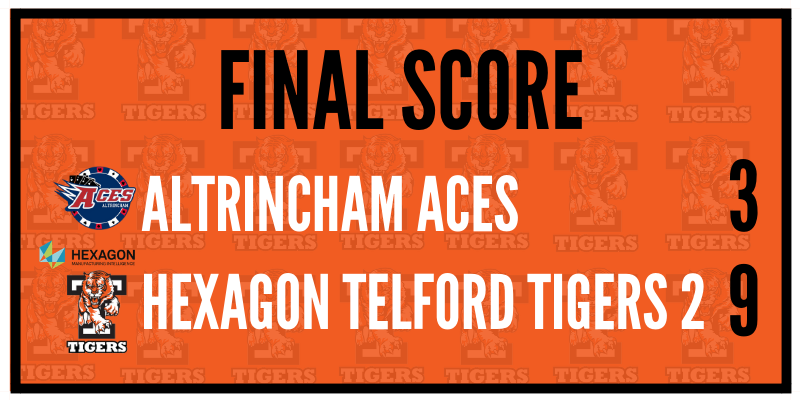 On Sunday 23rd September a small but enthusiastic Tigers crowd travelled to Altrincham to see the Telford Tigers 2 team play the Aces in the second game of their first double header of the season.

After the Aces had predicted themselves a four-point weekend the Tigers knew this may be a hard game.

The game started with no national anthem but lots of noise from the Telford fans. Both sides came out hard and fast, battles were fought at both ends of the ice but once again the Tigers found the back of the net first with a goal from #96 Charlie Hammerton.

The first period looked as if the Aces were beginning to take the edge both physically and in the back of the net, scoring two goals in four minutes.  The second goal saw the Aces goal scorer take Tigers net minder #41 Zack Brown off his feel and the nets off their moorings.  This was not the first time that the Aces were penalised for going in hard to the keeper, earlier in the period saw #66 Matt Price and #75 Liam Preece in the box after scuffles in front of the net after an Aces forward had issues stopping resulting in Zack being sprayed and an Ace in the box. But with 16 seconds of the period left, #59 Jordan Jolly turned the goal light red, bringing the score line to two all at the end of the period.

The second period saw the tigers take control of the game with Player Coach #72 Callum Bowley scoring two minutes into the period. The Aces found themselves constantly in the box, spending almost 8 minutes in Penalty kill, the Tigers found themselves with a five on three advantage more and once but were only able to capitalise on this once with a second goal from #96 Charlie Hammerton. A Power play goal from #27 Callum Griffin was the last goal of the night that would come from a Power Play.

The Aces continued to spend time in the box, with slashing and diving penalties. Two goals in 3 minutes from #59 Jordan Jolly saw the youngster get his first hat trick of the season and take the Tigers into a 7-3 lead at the end of the second.

The third period saw some good fast end to end hockey, Captain #4 Karol Jets and #77 Daniel Thomason both scored to see the tigers take the points the second time this weekend.  The D2 team managed to Ace their way to a four-pointweekend.

Jordan Jolly received a well-deserved Man of the Match award.

“It’s great to see us kick off our first weekend with four points and I have to say the lads put in two strong performances. Tonight, I thought we struggled to get a handle on the game in the first period and dictate the flow of the game, as Altrincham came out hard, got pucks deep and made it quite difficult for us. However, the second and third period was much better as we started to settle down, transition up ice with speed, got pucks on net, cut out silly turnovers and we were scoring those second opportunities which was good to see. We still have plenty of areas to work on, but it’s a great start for us and we’ll look to take that momentum into next weekend”

Telford Tigers 2 will be back in action again next weekend for another double header! First they will face Widnes Wild on Saturday 29th September at Telford Ice Rink followed by making a trip over to Flintshire on Sunday to face The Deeside Dragons for the second time this season!