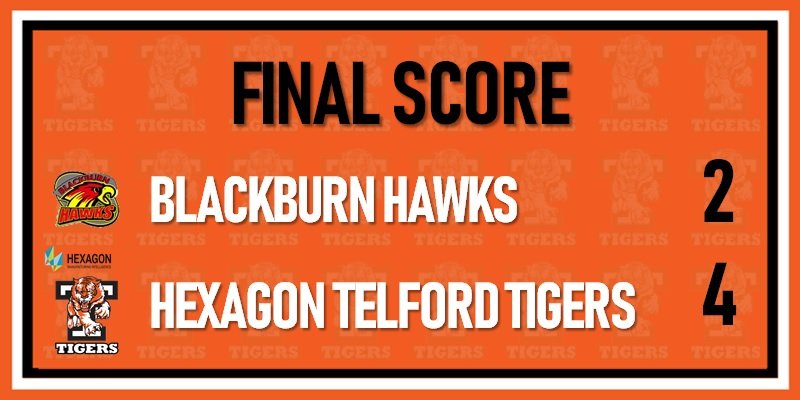 The Hexagon Telford Tigers soar to cup win when they faced off against Blackburn Hawks on Saturday night at Blackburn Arena in the NIHL North Cup. Tigers had lost twice in Blackburn last season, once on penalty shots and once when Tigers played without the required bench coach and, despite winning on the night, Tigers were punished with a 5-0 defeat.Tigers were coming into the game on the back of 3 consecutive defeats. Tigers were also without Jonathan Weaver for the 3rd game in a row.

Tigers started badly and were caught out after just 30 seconds of the game. Danny Rose misjudged a puck sent through the middle, allowing James Royds a 1 on 1 chance with Tigers’ net minder Tom Hovell. Royds fired home giving Hovell no chance. Tigers responded with an equaliser in the 9th minute, Brodie Jesson scoring from Scott McKenzie’s pass. Blackburn restored their lead 30 seconds later when Luke Boothroyd scored. Tigers ended the 1st period 2-1 behind and chasing the game.

The 2nd period was hard fought and Tigers had to wait until the 37th minute to level the game. Blackburn’s Petr Valusiak was given a tripping penalty, putting Tigers on a power play. Neat passing between McKenzie and Warren Tait left Jason Silverthorn with a great chance in front of goal. Silverthorn scored with a precise wrist shot to tie the game at 2-2. A minute later Tigers had their first lead of the game. McKenzie scoring from Jack Watkins’ pass to send Tigers into the break ahead 3-2. As the buzzer went for the end of the period, scuffles broke out between several players with Tigers’ Jesson being assessed a match penalty for fighting, seeing him ejected from the game.
The 3rd period was scrappy and in the 50th minute, Tigers received a further match penalty. Andy McKinney was ejected from the game for high sticking and Tigers given a 5 minute penalty. Despite this, it would be Tigers who would score the next goal whilst short handed. Plant scored from Silverthorn’s pass to give Tigers a 2 goal lead heading into the last 8 minutes of the game. Tigers held on despite further penalties to Corey Goodison and Rose, to win a feisty game.

After the game coach Tom Watkins said, “Tonight was a gritty performance coming from behind on the road in a tough building and securing the two points is huge. It really is tough to adjust to the surroundings and it is farcical we play hockey on an ice pad like that. We played short for the majority of the third period with Hovy (Hovell) making 3 or 4 huge saves. The guys really battled to ensure we got the points, showing real character.”
Watkins added, “I’m annoyed about the penalties we received at the end of the second period after Blackburn cleared the bench when an altercation was underway, which leaves us with no choice but to follow suit. We then receive a match penalty when one of the guys defends his teammate after Joe Hazeldine has been punched in the head by their number 71 which is clear to see on the video. We made sure our guys stayed on the bench but then we end up being worse off.”