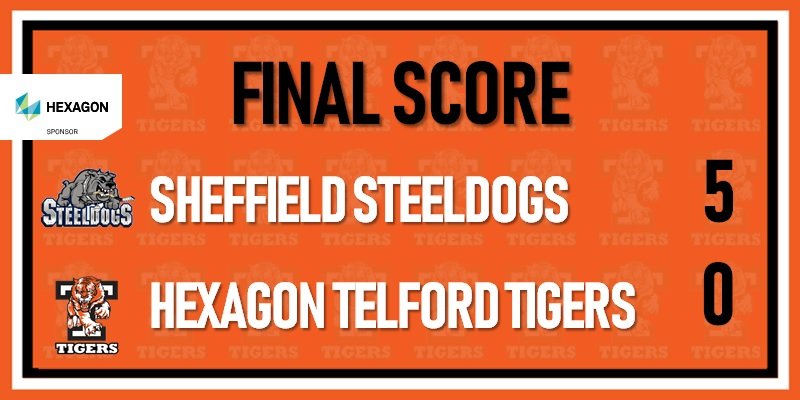 Lacklustre Tigers Lose Top Spot.  Hexagon Telford Tigers 1 travelled to Ice Sheffield to take on the Steeldogs in a top of the table clash. Tigers had taken top spot in the league last Sunday after a 8-5 win over Solihull Barons and Sheffield had lost against Hull Pirates. Tigers had beaten the Steeldogs 8-4 the last time the two sides met, a game in which Doug Clarkson hit a hat trick to seal the victory. Tigers faced two huge games this weekend, with a home game against Hull on Sunday night.

Tigers started the game strongly and had plenty of possession in the Sheffield defensive zone in the first five minutes with Doug Clarkson and Scott McKenzie both going close. Sheffield took the lead in the 7th minute and had some fortune to thank for the goal. A harmless shot was sailing wide of the goal but hit the skate of McKenzie and deflected into the path of Sheffield’s Ashley Calvert who tapped the puck into the goal from close range. The goal not only gave Sheffield the lead, but gave them some momentum as they went close shortly after when Milan Kolena’s shot hit Tigers’ net minder Tom Hovell on the shoulder and rolled behind him, narrowly wide of the goal.  Tigers were not at their fluid best during the period and too many passes were not finding their mark, allowing Sheffield possession and chances to shoot at Hovell. As the period ended, Hovell was awarded a delay of game penalty for covering the puck illegally, with the penalty being served by Andy McKinney, meaning Tigers would start the second period on the penalty kill.

Tigers killed off the penalty and had a great chance to equalise when Clarkson and McKenzie had a two on one breakaway but McKenzie’s shot was saved by Sheffield’s net minder Dimitri Zimozdra. Tigers would rue the missed chance as Sheffield broke up the other end and scored their second goal through James Spurr. Things got worse as Duncan Speirs added a third goal in the 32nd minute to give Tigers a mountain to climb.  Hovell then pulled off a magnificent save to keep Tigers in the game. A power play chance was wasted in the 33rd minute after Kolena had been called for high sticking. Tigers power play unit could not gain offensive zone possession allowing Sheffield to clear the puck all too easily. Sheffield thought they had added a fourth goal when Calvert applied the finish to Tim Smith’s shot but referee Matthews ruled the final shot had been hit with a high stick and disallowed the goal.  Tigers had two final chances in the last twenty seconds of the period but Ricky Plant and Jason Silverthorn could not force the puck home. Tigers did end up with a power play to start the third period when Speirs shot the puck directly out of play as the buzzer went with Speirs assessed a delay of game penalty.

Tigers could not make the extra man advantage pay, however. Just four minutes into the third period, Adrian Palak broke away on the Tigers’ goal and hammered a wrist shot past Hovell for Sheffield’s fourth goal. Tigers performance was so below par in the final period, they rarely looked like they would score, with shots being blocked or hit straight at Zimozdra. Sheffield added a fifth goal in the 59th minute with Spurr scoring his second of the game to round off an evening for Tigers to forget. Sheffield retake first place sending Tigers back in second in the league ahead of the visit of Hull.

Man of the match: Adam Taylor

After the game coach Tom Watkins commented, “It is tough to win when you play like that. Offensively and defensively we were horrible tonight.  We couldn’t buy a goal, didn’t get pucks through on the goal very often enough. We did create chances but weren’t clinical.  We took too long to get pucks off sticks and our power play was atrocious. We struggled to manage simple one on ones on the defensive side, got caught looking at pucks and guys stepped around us too easily. We also had bad body position, poor stick position and were on the wrong side of the puck too many times.  It was a very disappointing performance, when you’re not scoring nor defending well, it’s tough to get into the game.”