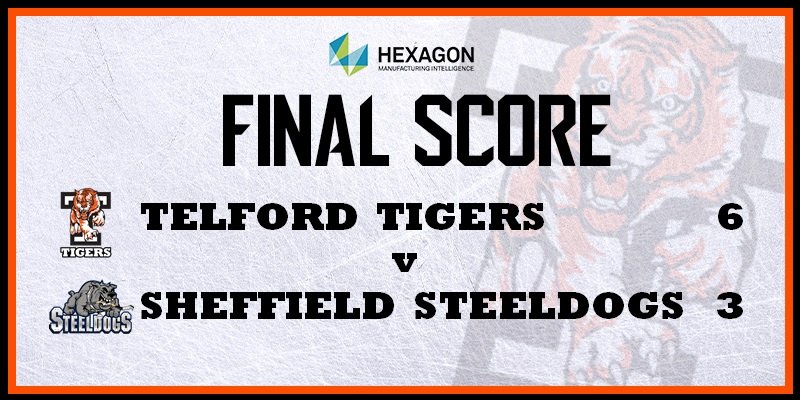 McKinney Hat Trick Leads Tigers To Victory. Hexagon Telford Tigers were looking to put behind them a disappointing defeat to Milton Keynes in their final game of 2019, with a victory at home against Sheffield Steeldogs in their first game of 2020.

Tigers’ lead at the top of the table had been cut to five points earlier in the week after second-placed Swindon had picked up a point in losing to Basingstoke Bison in a penalty shoot-out. The Wildcats’ result meant that Tigers had a game in hand on Swindon and needed to get back to winning ways.

Tigers were able to ice Brandon Whistle who returned to action and the game saw the debut of the newly signed Sam Watkins.

In goal for Telford was Brad Day and in goal for Sheffield was Dimitri Zimozdra.

Within twenty-two seconds of the start of the game, Tigers were gifted an early power-play chance when Sheffield’s Lewis Bell shot the puck directly out of play when attempting a clearance and was awarded a delay of game penalty. Tigers left it late in the power play but took the lead as the man advantage almost ended. Andy McKinney’s shot was saved by Zimozdra but he left a rebound at the top of the crease which was collected by Dominik Florian and he scored with a low shot to Zimozdra’s left. Sheffield’s Thomas Barry hit Thomas McKinnon with a check from behind which angered the Tigers’ defender so much that he skated after Barry and dropped the gloves, but the Sheffield player refused to engage. Both players received 10-minute misconduct penalties.

Day in the Tigers’ goal had very little to do in the opening ten minutes but was called on when a mistake let in Sheffield’s Nathan Ripley. Day was up to the task, blocking the shot and clearing.

Sheffield had barely threatened in the game but drew level in the sixteenth minute with a low shot from Jan Danecek that beat Day.

Tigers responded almost immediately to regain the lead with a well-worked goal. Florian superbly took control of the puck in mid-air, settled the puck down and sent a backhanded pass to Scott McKenzie who was clear on goal. McKenzie scored with a shot through the legs of Zimozdra to put Tigers 2-1 ahead.

Tigers had plenty of chances in the second period to put the game beyond Sheffield, Jack Watkins with the first early in the period. Watkins was in close but could not force the puck past Zimozdra’s pads. Tigers’ pressure paid off five minutes into the period. Brandon Whistle’s shot across goal found McKinney who deflected the puck past Zimozdra for Tigers’ third goal.

Jason Silverthorn then missed two chances from close range with Zimozdra making full use of his pads to block the puck and then deny Silverthorn again from the rebound.

Tigers would regret their missed chances as Sheffield drew within a goal when Lewis Bell’s shot was tipped past Day by Danecek for his and Sheffield’s second goal of the night.

Tigers responded well and scored the fourth goal. Ross Kennedy hit a slap shot that Zimozdra could only block, McKinney was on hand to collect the rebound and backhand it over the Sheffield netminder into the net. Tigers finished the period with further chances that they did not take. Whilst Sam Watkins was in the penalty box for tripping, McKinney went clear on goal and appeared to be tripped but no call came from the official. Tigers then had a two-man breakaway, Ricky Plant shot at Zimozdra’s pads to give Silverthorn a rebound but the Tigers’ captain couldn’t control the puck, allowing the Sheffield netminder to recover his position and prevent a certain goal.

Tigers started the third period in perfect fashion with a fifth goal. Barry was serving a tripping penalty for Sheffield when Andy McKinney tipped Corey Goodison’s slap shot past Zimozdra to complete his hat trick. Telford sensibly sought to play out the rest of the game, retaining possession and had numerous shots at Zimozdra.
Sheffield scored a late goal to draw within two goals of Tigers’ lead. Charles Thompson scoring after a goalmouth scramble. As the game entered the final thirty seconds, Zimozdra was pulled from the Sheffield net to give them an extra attacker for a face-off in the Tigers’ defensive zone. This backfired when Tigers won the face-off and Thomas McKinnon sent a shot the length of the ice into the empty net to score Tigers’ sixth goal and seal the victory. Tigers’ win maintains their five-point lead at the top of the table.

After the game Head Coach, Tom Watkins commented, “It was great to pick up a win in front of a packed house tonight. I think we controlled the game from start to finish, possession, territory and chances but again, we were frustrated in front of goal. We created so many good chances which we should have capitalised on and put the game to bed but, because we didn’t, we let Sheffield hang around for 40-50 minutes which is frustrating. I’m pleased for Andy McKinney tonight, he played a solid game, skating really well, worked hard and was rewarded with a hat trick. It was good to see Sam Watkins make a positive contribution on his debut, he made some good decisions and didn’t look out of place at all.”

Hexagon Telford Tigers 1 will next be in action at home on Sunday 12th, January against Basingstoke Bison. Match Night tickets available to purchase here!