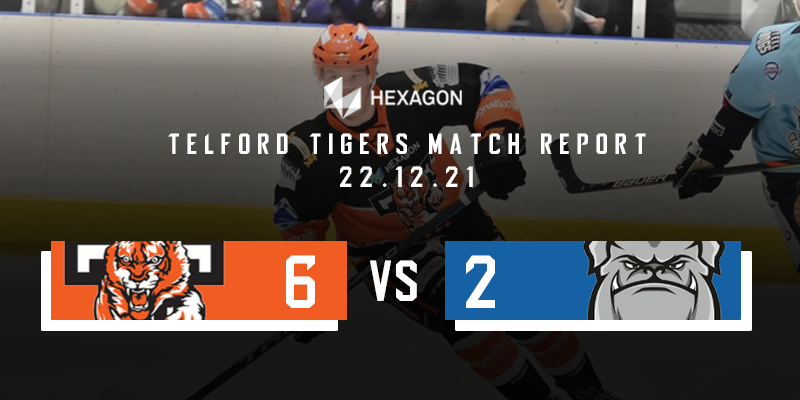 Steeldogs Hit for Six. Hexagon Telford Tigers returned to home ice after a weekend without a home game. Tigers had returned to winning ways with a victory over Bees in Slough but had dropped to fourth in the league standings. With Sheffield in second place, the Tigers desperately needed a win to close the gap.

Recent games had seen the Tigers’ squad decimated by injury and unavailability of players so the return to the lineup of the Tigers’ Great Britain U20 players: Jack Hopkins, Sam Watkins and Fin Howells was a welcome addition, as was the return of Ross Connolly from injury. The team were still without Ricky Plant and Jack Watkins through injury and Andy McKinney was still serving a suspension.

Sheffield had issues of their own and they were only able to ice 10 players, with the team missing a number of key players through illness and injury.

Tigers dominated the first period and were ahead early in the game. Scott McKenzie and Hopkins combined to allow Vladimir Luka a tap in past Dimitri Zimozdra in the Sheffield goal. Luka went close within a minute of the opening goal, with Zimozdra making a terrific save from point-blank range. Luka’s wait for a second goal wasn’t long as Hopkins and McKenzie combined again to find Luka unmarked in the slot. The Czech forward lifted the puck high over Zimozdra’s glove and into the net to double the Tigers’ lead. A third goal followed shortly after with Hopkins finding Luka in front of the goal again, Zimozdra saved the initial shot but the puck broke to McKenzie who slammed the puck home to give the Tigers a deserved three-goal lead.

Tigers started the second period in sluggish fashion and conceded a disappointing goal. Charlie Thompson was unmarked in front of the goal and shot straight at Brad Day but the rebound fell to Thompson and he shot from a tight angle into the net with the Tigers’ defence not reacting at all to either shot. The fluidity of passing that was evident in the first period was missing for much of the second period but a fortuitous bounce allowed the Tigers to score the fourth goal. A harmless, lofted pass was heading into the corner of the Sheffield defensive zone but a Steeldogs’ defender tried to glove the puck and ended up knocking it perfectly into the path of McKenzie who controlled the puck and sent it low past Zimozdra for his second goal of the game.

Early in the third period, Tigers’ Joe Aston hit the crossbar and Luka went close to getting his hat trick on a number of occasions. Tigers scored their fifth goal of the night when a shot from the blue line by Corey Goodison was tipped into the net by Jason Silverthorn giving Zimozdra no chance to make the save. Sheffield hit back with a goal of their own shortly after. Jack Brammer beat Day low down with a fierce wrist shot. However, the Tigers would have the final say on the scoresheet with a goal in the last minute of the game. Austin Mitchell-King forced a scramble in front of Zimozdra and Silverthorn was able to poke the puck home for his second of the game to seal a victory that sends Telford up into second place in the league standings.

After the game Head Coach Tom Watkins, commented, “It’s difficult, to sum up, tonight’s game, but most importantly we won the fixture. Sheffield obviously travelled with low numbers but made a game of it for sixty minutes and credit to them, they didn’t quit and competed hard all night. We didn’t take the game away from them the way I think we should have which was frustrating and we were guilty of not playing quickly enough. I would like to wish a Merry Christmas to all our fans, sponsors, volunteers and everyone involved in the club.”