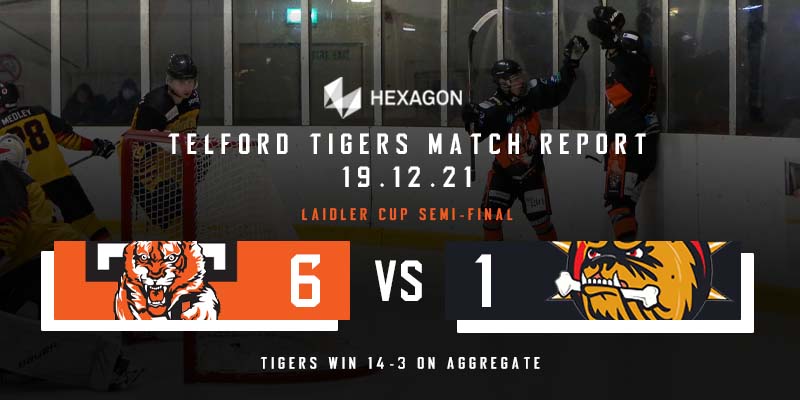 Hexagon Telford Tigers 2 confirmed their place in the Laidler Cup final this weekend! This will be Tigers 2’s first Cup final in the Club’s history for the Laidler team.

Tigers faced a doubleheader weekend for their debut Cup Semi-Final fixtures against Bradford Bulldogs, travelling to Bradford for the first of the two fixtures on Saturday 18th December, followed by a fixture on home ice the following day

Tigers had taken the top spot of the Midlands group table during the qualifying stages, which meant they were playing runners up of the North group table in the Semi-Finals round. On Saturday, Tigers travelled to Bradford with a few key players missing, but that didn’t drastically affect the game strategy set out by Head Coach Scott McKenzie and Bench Coach Doug Wildman; taking home a win and a 6-goal advantage following an 8-2 victory in Yorkshire.

It was fair to say, that on Sunday 19th December, Tigers were going into the second leg of the semi-final as strong favourites, and those odds were progressively solidified when Tigers started to pick up goals on home ice. It was Filip Supa who bagged the first goal of the game, nine minutes in after Washburn clinically passed the puck up to Supa who then swept it around Bulldog’s Bolwell and into the net. The period ended with the Tigers one goal up, seven goals up on aggregate.

The puck dropped for the second period and the hosts set the tone for the period straight away, with Callum Griffin scoring Tigers’ second goal of the game and Griffin’s second goal of the weekend less than two minutes into the period. This was swiftly followed by Tigers’ Assistant Captain Washburn picking up Tigers’ third goal within 20 seconds of the game resuming. The Bulldogs continued to put the pressure on, and Tigers started to throw the body more, which consequently led to picking up unnecessary penalties. Bradford found themselves with a two-man advantage when Brandon Anderton was penalised for two minutes for charging. Despite the hosts being short-handed, this didn’t stop them from dominating. A quick turnover of the puck allowed Jake Price to breakaway alongside Oli Hunt who then fired the puck into the top left corner of the Bulldogs’ net, taking the Tigers to a four-goal lead. Still, one man down, Tigers fought to maintain control of the game but frustratingly found themselves on a 5 on 3 penalty kill with more than five minutes left to play in the period.

The gritty hosts didn’t let their guard down and managed to kill both penalties [and score] and reset the game back to their usual pace. Clever and clinical play between Jolly, Mitchell and Fielder led to Tiger’s fifth goal when Deakin Fielder managed to shoot the puck through Bolwell’s legs and into the back of the net. Tigers tried to run out the clock in the second period and controlled much of the play, but the Bulldogs managed to capitalise, scoring their first goal with less than three minutes to go in the second period.

Tigers kept Bradford from scoring any further goals in the final period and managed to add a sixth goal with less than three minutes to go until the final buzzer. Smart defensive work from Supa in the corner and Price on the blueline, left Dan Mitchell to fire the puck over Bolwell’s shoulder and into the top left corner of the net.

Tigers’ win confirmed their place in the Laidler Cup final which will take place in January 2022 after a final winning aggregate score of 14-3 against the Yorkshire side.

After the game Head Coach, Scott McKenzie commented: “I’m really happy with our performances over the course of the weekend. Saturday’s result away to Bradford was especially pleasing as it made it almost impossible for them to compete on Sunday. We are really finding our identity and have a great spirit within the group. The position we have put ourselves in leading up to Christmas is great but there’s a long way to go and heading into 2022 we must remain focused. To be in a final is not only great for the players, but for the club and fans as a whole. Whatever the outcome, being in the final will be a great experience for everyone involved”

Tigers 2 Assistant Coach Doug Wildman also commented saying: “Our home game started at quite a stalemate where we struggled to find our composure to generate our offensive capabilities in the first period. But during the second period we came out with some fire in our belly to seal the game up and we looked like a different team. The team has gone from strength to strength as the season has progressed and we are still improving each week. We now look forward to the opportunity to play in a final with a strong chance of winning some silverware.”