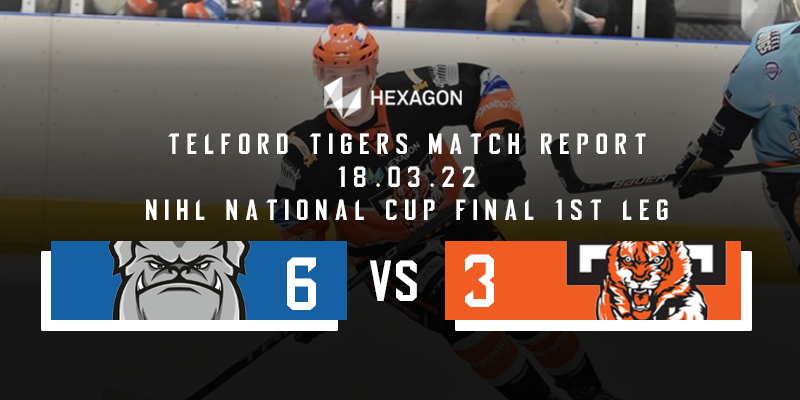 Steeldogs hit Tigers for six in Cup Final 1st Leg. Hexagon Telford Tigers started the first of three vital games this weekend with a trip to Sheffield to face the Steeldogs in the first leg of the National Cup Final. Tigers had qualified by beating Milton Keynes in the Semi-Final and Sheffield had beaten Swindon. The game was almost a sell-out and the away end was completely full, with great support on the road by the Tigers’ fans.

Tigers remained without Jack Watkins and Ross Connolly who were joined on the sidelines by Danny Rose.

Tigers made the perfect start to the game and opened the scoring in the opening thirty seconds. A scramble in front of Dimitri Zimozdra in the Sheffield goal saw Jason Silverthorn’s shot turned in by Jack Hopkins from close range. Tigers were not ahead for long as a defensive turnover by Scott McKenzie led to Alex Graham firing home past Brad Day to draw Sheffield level. The only penalty of the first period was assessed against Tigers’ Jake Price. Referee Williams awarded a harsh check to the head call. Sheffield took full advantage of the extra player, scoring ten seconds into the power play. Tigers lost the faceoff and a shot around the boards caught Day out, allowing Jack Brammer to shoot into the open goal to give the Steeldogs the lead.

The second period opened with another defensive turnover which led to an Alex Graham breakaway. Jonathan Weaver chased back to prevent Graham from scoring but was called for hooking and a penalty shot awarded. Graham’s penalty shot was brilliantly saved by Day.  Tigers then had their first power-play chance of the night when Andreas Valdix was called for tripping. Despite some Tigers pressure on the Sheffield goal, it would be the Steeldogs who scored. Sheffield won possession of the puck and Lee Bonner broke on the Tigers’ goal. Day saved the first shot but could do nothing to stop Sam Towner from scoring with the rebound. Sheffield had the better of the rest of the period and went close when Graham hit the crossbar and then Jason Hewitt was denied by a brilliant point-blank save from Day.

Sheffield continued their dominance at the start of the third period and added a fourth goal.  Hewitt’s shot from behind the goal hit Day’s skate and bounced behind him into the net. Tigers hit back with a second goal, Fin Howells found Andy McKinney unmarked in the slot and McKinney sent a low wrist shot along the ice beating Zimozdra.

With Tigers back in the game they were still under considerable pressure as Graham hit the crossbar for the second time. Sheffield added a fifth goal when Lee Bonner beat two Tigers’ defenders to the puck and shot low past Day. With time running out, Tigers had a power-play chance when Brady Doxey was called for hooking. McKenzie hit the bar with a wrist shot and then disaster struck for Tigers as Weaver lost the puck on the Sheffield blue line allowing Valdix to take possession, skate in on Day’s goal and slide the puck into the net for Sheffield’s sixth goal and Sheffield’s second shorthanded goal of the game.

Tigers hit back immediately with what could prove to be a crucial goal. Vladimir Luka won the puck deep in the Sheffield defensive zone and passed to McKinney who hit a first-time shot past Zimozdra.

After the game Head Coach Tom Watkins, commented, “If you look at the two teams tonight Sheffield were the better team and deserved the win, no question. We wanted to be tough to play against and make it difficult for them, make them earn anything they got but I don’t think they had to do that. We were at fault on every goal we conceded, mainly from turnovers that led directly to a goal and two shorthanded goals against which is very disappointing. We are better than that. You can’t expect to win when we can’t manage the puck effectively.”