Three in a row for Tigers. 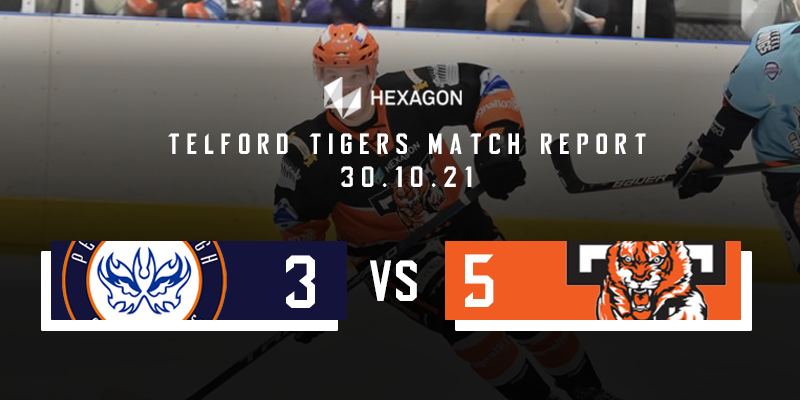 Three in a row for Tigers. Hexagon Telford Tigers travelled to Peterborough to take on the Phantoms on Saturday night, just a few days after beating the same opponents in Telford 5-2. Tigers had returned to form with back-to-back wins and welcomed back Scott McKenzie to the lineup. Tigers were still without Jonathan Weaver and saw Austin Mitchell-King, Jack Hopkins and Dan Mitchell also unavailable.

Tigers made a bright start and it was no surprise when they took the lead in the 5th minute. Andy McKinney sent a pass from behind the goal to an unmarked Jack Watkins in the slot. Watkins sent a wrist shot past Jordan Marr in the Peterborough goal to open the scoring. Tigers dominated much of the first period and ended it two goals ahead when McKenzie picked out an unmarked McKinney in front of goal. The Tigers’ forward slammed the puck past Marr to send Tigers into the break firmly in control.

Early in the second period, Tigers took a tripping penalty which saw Nick Oliver sent to the penalty box. Tigers added a third goal despite the numerical disadvantage. Marr in the Peterborough goal made a horrendous turnover, passing the puck straight to Jason Silverthorn 20 feet from the goal. The Tigers’ captain accepted the gift and backhanded the puck over the sprawling Marr to put Tigers firmly in control. Peterborough soon hit back with two quick goals midway through the period. Silverthorn turned the puck over in the Tigers’ defensive zone and Morgan Pizzo took full advantage, shooting low past Brad Day and shortly after, Ales Padelek scored from close range to narrow the lead further.  Tigers needed to take back control and had an ideal opportunity when Tom Norton was in the penalty box for slashing. On the subsequent power play, a McKenzie shot was saved by Marr but Joe Aston pounced on the rebound and fired the puck home to restore Telford’s two-goal lead.

Peterborough scored early on in the third period after a Nathan Salam shot was tipped in by Duncan Speirs giving Day in the Tigers’ goal no chance. With Peterborough in the ascendancy, Tigers needed to answer back and were given an immediate chance with a power play after Norton was called for delay of game. Tigers’ power-play unit worked the puck well and McKenzie sent the puck along the blue line where Corey Goodison met it with a ferocious slap shot which flew past Marr before he could react and gave Tigers another two-goal lead to defend. Peterborough never stopped attacking and pulled Marr from the goal with three minutes left but Tigers came closest to scoring when McKenzie sent a long-range shot towards goal but the puck bounced off the post and the Phantoms’ defence were able to clear it. Tigers played out the final minutes and held on for a deserved victory, their third consecutive league win.

After the game Head Coach Tom Watkins, commented, “That’s a really valuable two points tonight. We were short-staffed and on the road in a really tough rink where pucks take some horrendous bounces at times, but I thought we played really smart, disciplined hockey. iI was never going to be pretty but I’ll take an ugly road win any day.

I really liked our commitment all over the ice, we made sure we got pucks out in a hurry and I thought the boys were excellent with their support play. We were great along the walls and created goals from some smart puck placement and mentally we were resilient which is a big big plus. It was a real character win.”