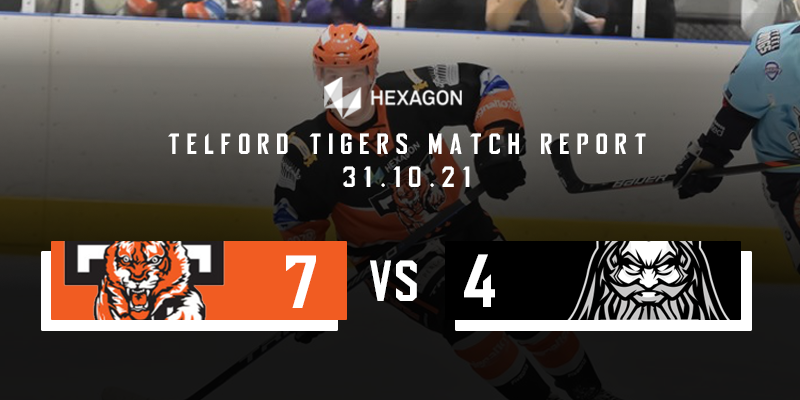 Tigers Storm to Victory. Hexagon Telford Tigers returned to home ice to face Milton Keynes Lightning in an NIHL National Division game. Tigers came into the game having won their previous three games and were missing Jonathan Weaver, Ross Connolly and Dan Mitchell from the lineup.

Tigers dominated the first period and could have been out of sight by the time the period ended. Nick Oliver took a tripping penalty in just the second minute of the game giving Milton Keynes a man advantage. Tigers penalty kill has been strong of late and this continued and the team managed to score whilst shorthanded. Ricky Plant forced a turnover in the Milton Keynes’ offensive zone and managed to pass whilst under pressure to Jason Silverthorn. The Tigers’ captain shot through Matt Smital in the Milton Keynes goal to give Tigers the lead. Despite the numerical disadvantage, Tigers almost scored again with Plant forcing a terrific save from Smital. Milton Keynes respite didn’t last long though as a minute later Tigers forced a second goal. Jack Hopkins lead a breakaway and his shot was saved by Smital but Joe Aston was first to the rebound and slammed the puck home.  Tigers continued to pour forward and Silverthorn and Fin Howells both hit the post before Smital made another strong save, this time from Scott McKenzie. Tigers finished the period three ahead after scoring a power-play goal whilst Lightning’s Bobby Chamberlain was serving a roughing penalty. Ricky Plant shooting through a crowd of players to give the Tigers a 3-0 lead at the break.

Milton Keynes came out for the 2nd period in much more physical fashion and found themselves four behind in the first minute of the period. Andy McKinney scored an absolutely stunning goal to give Tigers their fourth goal. The Tigers’ forward skated with the puck after winning a board battle at the Tigers’ blue line and skated past two static defenders and sent the puck high past Smital with a superb shot. The Lightning were riled and shortly after, Hallden Barnes-Garner took a five-minute boarding penalty for a nasty hit on McKenzie followed by Bobby Chamberlain taking a roughing penalty. Milton Keynes killed off the penalty and managed to get on the scoresheet midway through the period, Sam Talbot scoring from close range. Within a minute, Tigers struck back to restore the four-goal lead. Once again Ricky Plant was at the centre of the Tigers attack, winning the puck and finding Silverthorn who expertly backhanded the puck past Smital for Tigers’ fifth goal. Telford headed to the break firmly in control of the game.

Tigers added a sixth goal midway through the final period. With Zaine McKenzie in the penalty box for boarding, Tigers scored a power-play goal with Danny Rose and Plant combining to set up McKenzie to score from close range. Milton Keynes pulled another goal back through Adam Laishram but again Tigers struck back almost immediately with their seventh goal. Jack Hopkins won a face-off and passed to Joe Aston who sent an unstoppable shot past Smital.  Tigers conceded two late goals through Liam Stewart and Chamberlain but this gave the scoresheet a closer look than the game deserved. Tigers’ win takes them up to second in the early league standings and gives them a first 4 point weekend of the season.

Following the game Head Coach Tom Watkins, commented, “It was a really gutsy performance from the team and a great result, we totally dominated the game in every department.

We had a number of guys out injured, several playing injured, others playing sick and then we lost Ross Connolly before the warm-up but the players showed great character and outclassed a team with some of the best talents in the league. I really love the attitude of the guys right now, total team-first display, really good compete level from everyone, blocked shots and off the back of that we really showed our ability on the puck.”