Tigers 1 fall at the Semi-Final 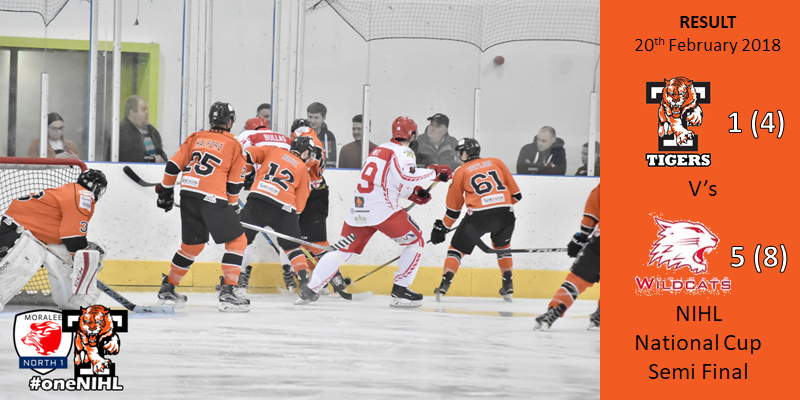 Telford Tigers miss out on the final after cup heartache against Swindon Wildcats, with a cup final space up for the taking both sides came into the game with one eye on the chance of silverware.

The 1st leg finished all square at 3-3, so it couldn’t be more finely balanced.  As expected the pace of action was fast with both sides trying to exert their authority early on. The opening goal came in the 8th minute when Warren Tait scored from close range.  A power play goal assisted by Corey Goodison & Scott McKenzie.

Tigers lines were bolstered for this outing with James Smith and Joe Aston playing up from Tigers 2. The end-to-end action carried on and with 18 minutes gone ex-tiger Phil Hill scored following a goal mouth scramble, assisted by Floyd Taylor.

Within a minute Swindon scored their second sending the travelling fans wild, Jan Kostal scoring an unassisted goal to the top right corner. The period ended with the visitors 2-1 ahead.

The 2nd period began the same as the 1st, Telford putting some early pressure on the Swindon goal. But it was the Wildcats who grabbed the next goal in the 23rd minute Edgar Bebris coming down the right and finishing past Denis Bell.

Telford continued to try and apply pressure on Swindon, but again it was the visitors who found the back of the net on 32 minutes. A scrappy goal poked in by Kostal. Ex-Tigers man Max Birbraer cooley slotted home at the far post after some good work from Wildcats captain Aaron Nell and Sam Bullas. A busy period of hockey finishing in favour of Swindon 5-1.

With it all to do Telford had to get back into the tie, the pace didn’t slow in the final period, Tom Watkins’s men giving it everything to breach the Swindon defence.

Sadly it was just not Telford’s nigh and a scoreless period meant that the Wildcats advance to the final.

The aggregate score 8-4 to Swindon