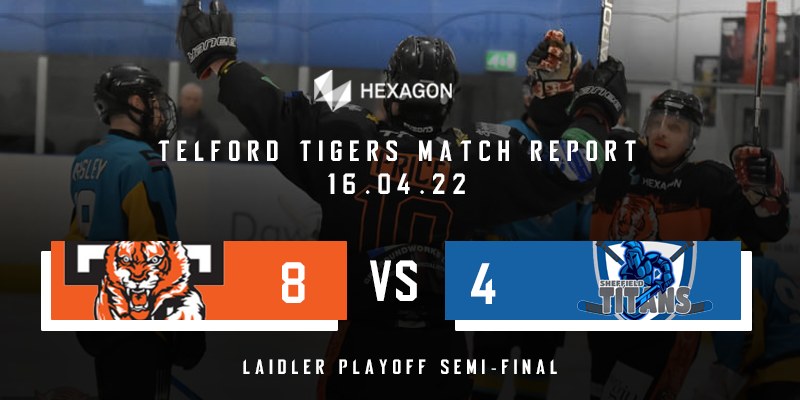 Tigers 2 Playoff Semi-Final Success. Hexagon Telford Tigers 2 travelled to Widnes on Saturday for their playoffs semi-final fixture. After finishing the 2021/22 league campaign top of the table, Telford Tigers were drawn against fourth-place Sheffield Titans for the first semi-final of the weekend.

Tigers had won both of their league games this season against the Titans, including an 8-2 win in the last meeting between the two teams.

A sluggish start to the first period saw Tigers create few scoring opportunities, with the Titans defence being reasonably solid. Nevertheless, both teams pressed on looking for the first goal of the game and it was Sheffield who snatched it up. An even-handed goal from Rafter gave Sheffield an early lead, but the celebrations were quickly dampened when Callum Griffin netted Tigers’ equalising goal less than a minute later.

Tigers quickly then found their feet and managed to pick up another two goals within seconds of each other thanks to Charlie Webb and Filip Supa. The period headed into the final two minutes and Sheffield were hungry to close the gap, but Telford struck again with another even-handed goal, this time from Tom Byrne. The first period ended with a three-goal lead for Tigers.

Puck dropped for the second period, and once again it was slow and bitty start. The pace started to pick up when Tigers had a few chances, but they were quickly washed out by the referee. Titans had a 5-minute powerplay opportunity after Lucas Price was slammed with a 5-minute boarding penalty just behind the Titans net. Frustratingly, Sheffield capitalised on the powerplay, but Tigers continued to be a man down for the remainder of the boarding call.

Tigers managed to kill the rest of the penalty and return to full strength, where then Lucas Prices exits the penalty box to clinically pick up the puck from Webb to then pass on to Matteri who slots the puck into the Titans net for the fifth Tigers goal. Telford managed hold onto the three-goal lead, but they finished the period short-handed after Karol Jets was handed a two-minute minor penalty for hooking with just six seconds left on the clock for the period.

The puck dropped for the third and final period and still being a man short the Titans had the advantage on the face-off. No less than 30 seconds into the period and Sheffield managed to capitalise on the powerplay, squeezing the gap once again. Thankfully, Tigers’ grit and determination paid off after conceding, when Lucas Price netted his first goal of the game exactly 30 seconds later.

Back to a comfortable three-goal lead and Tigers settled back into the game and reset the pace.  Just before the game hit the final 10-minute mark, Tigers secured another goal thanks to Callum Griffin with assists from Brandon Anderton and Conor Gordon. After a neutral face-off, Titans found themselves on a breakaway. Conor Gordon attempted to intervene but ended up landing himself with an interference penalty, giving Sheffield another powerplay opportunity.

The puck dropped for the face-off in the Tigers zone, and landed perfectly in Titans’ Ethan Jones’ feet who fired the puck into the back of Brown’s net. With still 10 minutes left to play, both teams were looking for the closing goal of the game, but still with a comfortable goal-buffer, Tigers were just looking to continue holding onto the win they already had. With now less than five minutes to go until the final buzzer, Sheffield’s James Cooper landed a tripping penalty, gifting Tigers another powerplay opportunity. Frustratingly for Tigers, before they could capitalise, they too found themselves shorthanded after Filip Supa was called for hooking with just over two minutes remaining in the game.

Both teams managed to successfully kill the penalties and the game went into the final few seconds. The end of the game action was all in the Titans zone but just before the final buzzer sounded, Tigers’ Spridgeon dished the puck across the goal crease to Callagher who tapped the puck straight past Winters and into the net at 59:59. The game finished 8-4 to Tigers.

Telford Tigers now progress to the final of the Laidler Final Four playoffs where they will face Hull Jets after their 3-2 victory over Sutton Sting.

The final will take place on Sunday 17th April, at Planet Ice Widnes, at 4pm.

Man of the match: Karol Jets