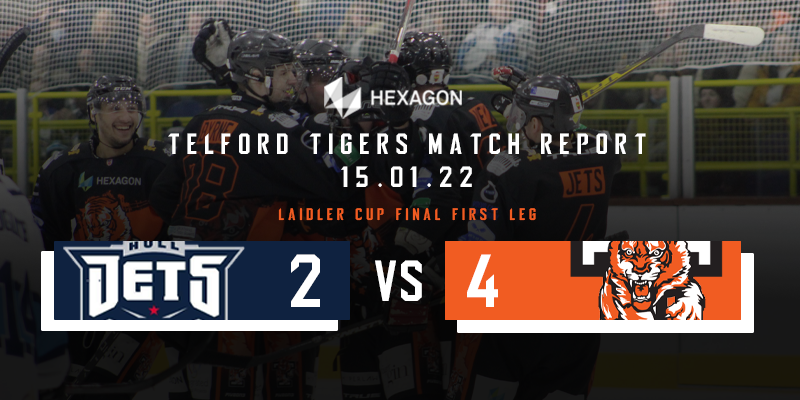 Tigers 2 sweep two goal advantage in Cup Final. Hexagon Telford Tigers 2 took to the ice for the first of the two-legs in the Laidler Cup Final on Saturday against Hull Jets. The Shropshire side travelled up to the East-Yorkshire port City for the first time this season, having not yet met for a league clash. 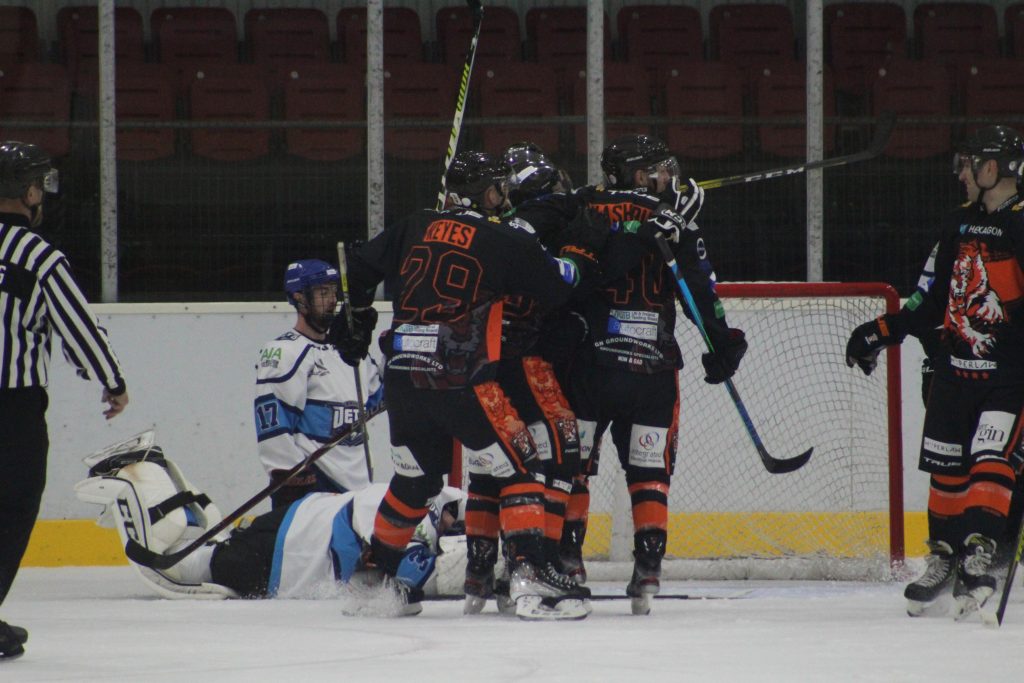 Tigers made a firm start to the game and Hull Jets seemed to be surprised with the pace and power of the Tigers’ forwards. With the pressure mounding on Jets’ Liam Jackson in nets, a Tigers goal was imminent… Tigers’ defenceman Crowe found himself on a breakaway towards the Jets’ net, passing up the ice to Filip Supa who made a shot, bouncing off Jackson’s pads and into the feet of Oli Hunt who tapped the puck into the Jets’ net.

Having a one goal deficit for the Jets pushed them into a sense of alarm and despite the non-stop focused play, the Jets started to blunder; with Anson picking up the first penalty of the game in the fourteenth minute of play for tripping. Tigers continued to hold possession of the puck for the majority of the powerplay and managed to capitalise on it when Karol Jets picked up Tigers’ second goal of the game in the fifteenth minute.

Heading into the final five minutes of the first period and Tigers continued to uphold their two-goal lead, but the period started to become fiery. In a breakaway moment for Jets, Tigers’ netminder Zack Brown ended up in a heap before the pipes as several Jets players piled into the net. Tigers’ Captain Mike Jones found himself as the mediator but pulled the short straw in the incident, receiving a two-minute roughing penalty. The first penalty kill for the Tigers was a tough test, but they didn’t crack under the pressure and continued to hold their two-goal lead until buzzer sounded for the end of the first period.

The second period saw Jets play with a lot more fire power. Their continuous pressure on the Tigers started to show when Tigers’ Oli Hunt was given a delay of game penalty in the Tigers defensive zone, handing the hosts their second powerplay followed by a third shortly after a minor penalty was given to Crowe for hooking. Fortunately, the Tigers’ penalty kill strategy paid off once again and with the game approaching the halfway point, it was easily either team’s game despite the scoreline. The Jets had succeeded in interrupting Tigers’ offensive up until Ben Washburn picked up the puck in the neutral zone, passing to Filip Supa who shot the puck top right corner of the Jets’ net making it three goals for Tigers. 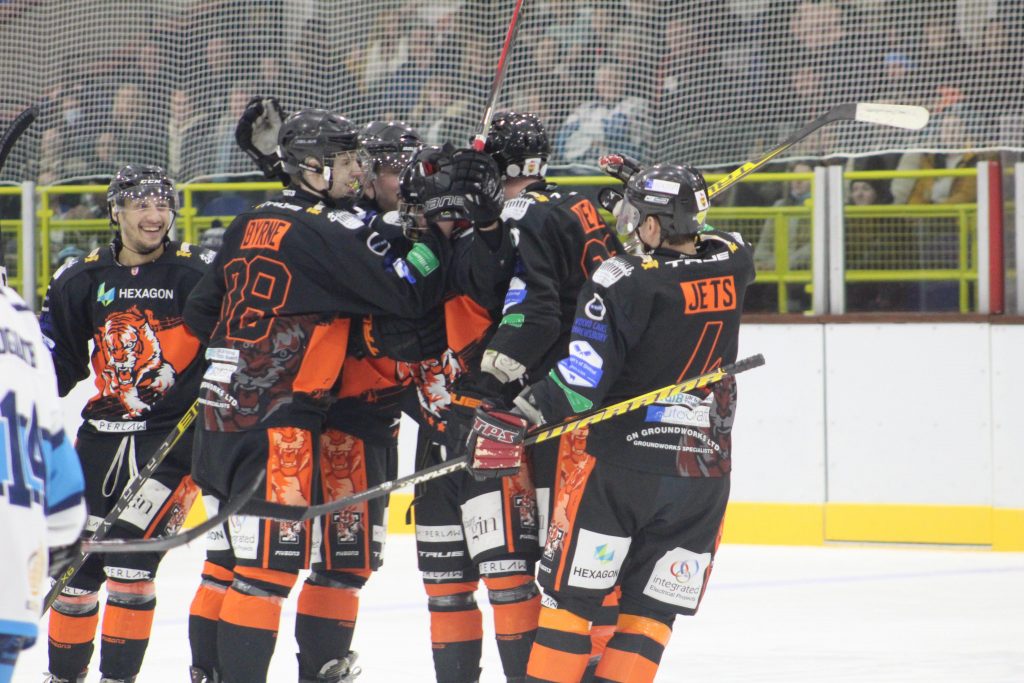 Now three goals down, Jets were hungry for a goal and started to pile the pressure on the Tigers making Brown work hard in the Tigers’ goal. Tigers defended desperately and had to defend even more thoroughly when Anderton was given a minor penalty for hooking. The powerplay for the Jets worked in their favour, picking up their first goal of the game in the 38th minute; though, Tigers responded rapidly when Tigers’ youngster Charlie Webb picked up his first senior goal on a delayed penalty with less than two minutes to play in the second period. The period ended four goals to one in the Tigers favour.

Tigers made an average start to the third period with the Jets’ having the upper hand on a man advantage less than five-minutes into the period no thanks to a tripping penalty called on Howells and this wasn’t the only penalty given to the visitors. A holding penalty on Matteri followed by a five-minute controversial boarding penalty for Filip Supa allowed Cobley to score Jets’ second goal, reducing the Tigers’ lead to two goals.

Just to add insult to injury to the Jets, with less than two minutes remaining on the clock Griffin attempted a shot, rebounding back out into the Jets’ crease. Kieran Beach took matters into his own hands but found himself picking two minor penalties for slashing and roughing, with Griffin also picking up two minutes for roughing. Tigers held on to win the game and head into the second leg of the Laidler Cup final with a two-goal advantage.

Telford Tigers 2 will host the deciding leg of the Cup final against Hull Jets next Saturday 22nd January at Telford Ice Rink, with a 7pm face-off.

Man of the match: Liam Preece

“First leg of the cup final away to Hull with a 4-2 lead is great stuff. We knew we wouldn’t have an easy game in their barn, but we started fantastic and soon had a 2-goal lead. Hull never slowed down their attacks, but we were confident in our ability to shut them down and catch them on the breaks. By the second period we had settled and the openings started to come for us. We knew that in the third period they would throw the kitchen sink at us, and they did. We showed great composure and although we had to kill a few penalties, the lads never gave less than 100% and that’s the performance we asked for.

This sets us up for a barn stormer of a game next weekend to see who lifts the cup. We also want to give a great shout out to the coach full of supporters who travelled and made more noise than the whole of the full, home Hull arena home fans and that gave the lads such a boost, so thank you all. See you all on the 22nd.”

Tickets are now available to purchase for the final leg of the Laidler Cup Final taking place next Saturday! Book your tickets here!